Canada’s Best Sports Moments Of 2021 And Their Betting Stories 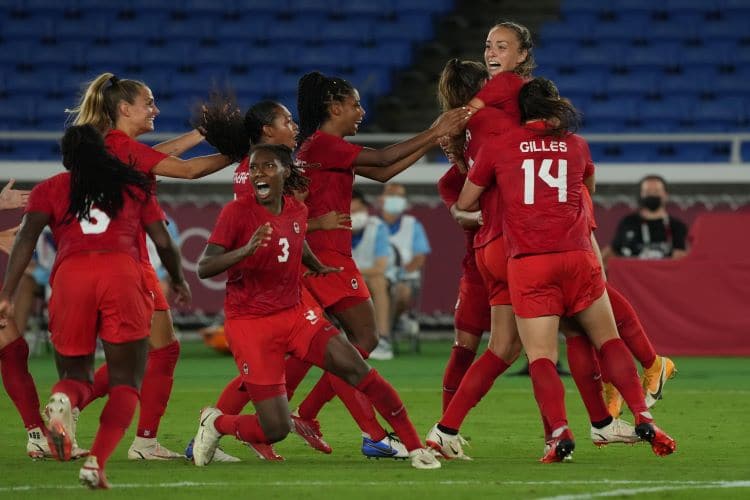 As the book closes on another year in sports, it’s only natural to reflect back on some of the special moments we witnessed. Unfortunately, COVID-19 wreaked havoc on the sports and sports betting worlds in 2021, making it a strange and frustrating year on so many levels.

On a positive note, Canada legalized single-game sports betting on Aug. 27, giving bettors across the country legal provincial sportsbooks to wager with and putting an end to the days of being forced to bet parlays only with a Pro-Line ticket.

This fall, good news for sports bettors around the country continued to pour in, when it was announced Ontario would be opening up its market to private operators early in 2022, and Alberta to a lesser extent by allowing only two private sportsbooks to operate in the province next year, at least for now.

We’ll find out who gets licensed in the two provinces in 2022, but it means more legal options for sports bettors are on the horizon. Popular operators like DraftKings, FanDuel, Caesars, PointsBet, BetMGM, BetRivers, and theScore Bet could revolutionize the sports betting market and end the monopoly that government-owned lotteries currently have in the country.

Now it’s time for a look back at some of the best sports (betting) moments in Canada from this past year:

The Canadian women’s soccer team entered the Summer Games with as long as +2500 odds (BetMGM) to win a gold medal after collecting back-to-back bronze hardware at the previous two Olympics. Amazingly, the Canadian women played Sweden to a 1-1 draw in the Gold Medal Game through regular time before prevailing in a dramatic 3-2 penalty-kick session to capture gold for the first time in the history of the program.

Expectations couldn’t have been higher for sprinter Andre De Grasse leading up to the Tokyo Olympics, and he delivered with three medals, including a gold in the men’s 200-meter event when he posted a personal-best time of 19.62 seconds to set a new Canadian record. De Grasse was a slight +140 favorite at DraftKings, but other sportsbooks had him as long as +350 to win the event.

Despite running his fastest 100-meter event ever with a time of 9.89 seconds, De Grasse (+900 at DraftKings) had to settle for bronze in the marquee track event of the Olympics, as he finished behind Italy’s Lamont Marcell and American sprinter Fred Kerley. De Grasse added a third medal, a bronze, in the 4×100-meter relay event to cap an awesome Olympic showing and increase his career medal total to six (one gold, one silver, four bronze).

The decathlon is arguably the most grueling Olympic event, with athletes competing across 10 different track and field disciplines. Damian Warner, who was heavily favored (between -200 and -150, depending on the sportsbook) to win Olympic gold at many sportsbooks, led the event wire-to-wire, becoming just the fourth athlete ever to eclipse a total score of 9,000 with a tally of 9,018.

He placed first in the 100-meter dash, 110-meter hurdles, and the long jump portions of the event, and capped off his dominant performance by placing fifth in the final 1,500-meter race to capture gold. Warner gave Canada its first-ever gold medal in decathlon, and was named this year’s Lou Marsh Award winner, given annually to Canada’s top athlete.

London has a new Olympic champion. Pure joy from family, friends and coaches as Damian Warner captures gold in decathlon for Canada at the Tokyo Olympics. Warner wrapped up the decathlon with a final score of 9018 after 10 events #LdnOnt #OlympicGames pic.twitter.com/O2BPw2TUs7

The Toronto Blue Jays signed left-hander Robbie Ray to a one-year, $8-million deal to pitch for them in 2021, with the modest hope that he’d slot in as a middle-of-the-rotation starter who could eat some innings for the team. The 30-year-old was barely on oddsmakers’ radars when they posted their Cy Young Award odds prior to the season, assigning Ray odds as long as +10,000 to be named the American League’s top pitcher.

But once he reported to spring training, Ray was open to tweaking his delivery and his workout routine to bulk up, and the results spoke for themselves. The southpaw posted an incredible 2.84 ERA, 1.04 WHIP, with 248 strikeouts over 32 starts to earn 29 first-place Cy Young votes and pay off any of the bettors that grabbed him at long odds throughout the journey.

Unfortunately for Blue Jays fans, he’ll be taking his talents to Seattle next season.

Every sports bettor dreams of cashing a ticket on a relatively unknown player at ridiculously long odds. And that’s just what nearly happened at the 2021 U.S. Open for Canada’s Leylah Fernandez, who shocked the tennis world by pulling off upset after upset to reach the final after entering the tournament as the 73rd-ranked women’s tennis player in the world. Her pre-tournament odds were as long as +30,000 at British Columbia Lottery Corporation’s PlayNow, but her fairytale run fell short thanks to Emma Raducanu’s straight-set victory in the finale.

A look at the U.S. Open odds history for 🇨🇦Leylah Annie Fernandez🇨🇦

She will have an entire nation behind her in the semifinals! https://t.co/ghEluC1qWc

Expectations were low for the Canadiens, who had +4,500 odds to win the Cup prior to the season, but the team edged into the last playoff spot in the Eastern Conference with a mediocre 24-21-11 regular-season record. But that’s when goalie Carey Price channeled the ghost of Roy, backstopping the Habs to three consecutive series wins over Toronto, Winnipeg and Las Vegas, to earn the right to play Tampa Bay for hockey glory. Unfortunately, Montreal and Price ran out of gas when it mattered most, falling to the Lightning in five games and denying their futures bettors a huge payout.

Playoff Price was truly a treat. 🤩

We take a look back at the best saves made by Carey Price during the 2021 #StanleyCup Playoffs. pic.twitter.com/6sYGtKYYxu