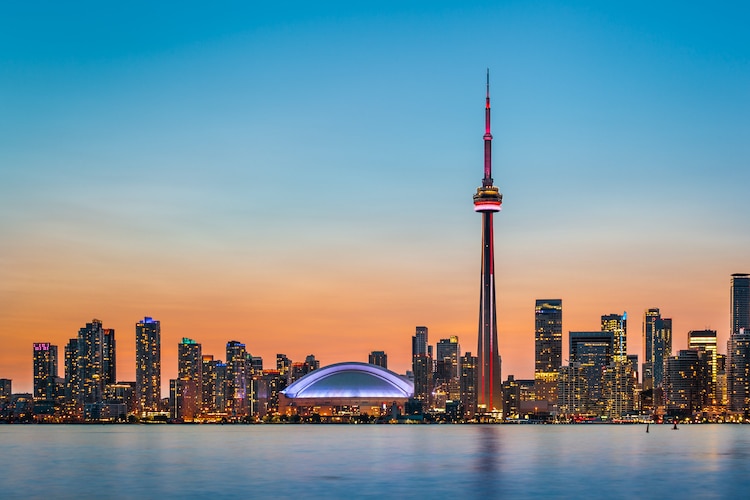 Skyline of Toronto over Ontario Lake at twilight (Shutterstock)

After failed efforts to launch single-game, Las Vegas-style sports betting that stretch back for decades, Canada could be on the verge of mirroring the U.S.

That was the sentiment of an iGB “Canada’s PASPA Moment” webinar panel of experts on Thursday.

Canadian gaming law attorney Ron Segev said that unlike in previous attempts, this time a cabinet minister is leading the effort with a bill.

“In short form, it gets more attention, more time for debate, more time on the floor,” Segev said. “A private member’s bill can get lost, and not reviewed.”

Segev said that most bills need to go “three rounds” in the Canadian House of Commons before moving on to the Senate — “and in the past, bills have usually died in the Senate. We expect to obtain Senate approval, and for this to become law.”

As for a timeline, Segev added from his consultations with policymakers, “We are hoping for March or April. Of course, the Senate has an independent mind.”

Benji Levy, president of the popular theScore sports data app that has launched with sports betting in New Jersey, said: “The timeline that Ron is hearing is the timeline that we are hearing.”

Grant Johnson, CEO of Esports Entertainment Group, said, “I am cautiously optimistic. This feels a little bit like a reboot of 1998, but the landscape is radically different today than it was back then.”

Why now, finally, for Canada?

The panel title refers to the Professional and Amateur Sports Protection Act of 1992, a U.S. law struck downy by the U.S. Supreme Court three years ago that had banned most legal sports betting. That launched a “gold rush” that already has led to half of U.S. states approving the same sort of sports betting that Nevada has featured for more than a half-century.

But Segev said that another trigger is the COVID-19 pandemic: “The government needs to replenish its coffers. And Ontario has been particularly hard-hit by COVID.”

Johnson agreed, saying, “This seems like an easy one [for national policymakers],” while Segev said, “There is more excitement this time, compared to previous attempts.”

“In the macro-environment, we are looking at how sports leagues in North America are approaching sports betting,” said Levy, whose country has seven NHL teams plus the NBA and MLB teams in Toronto. “We have seen all the leagues engage constructively [with sports betting partners] to see what is out there. In the past, the leagues were a lot less supportive.”

Indeed, it was the leagues themselves that filed a lawsuit in 2012 in an attempt to thwart a New Jersey state law designed to allow sports betting at the state’s racetracks and Atlantic City casinos.

Who will bet – and on what?

Both Johnson and British Columbia lottery official Stewart Groumoutis said that the “coveted” age 20-35 male demographic likely will lead the way in a country no longer restricted to multiple-level “parlay” wagers as currently is the case.

Johnson said that in the United Kingdom, some sportsbooks — reeling last spring after cancellation of most sporting events at the start of the pandemic — for a time were taking in more than 50% of their handle on eSports.

Levy said that in his experience, American regulators have had a “learning curve” regarding eSports, with most expressing concerns about the youthfulness of both the star players and the audience.

“It’s going to be a gradual build as regulators get comfortable,” Levy said. “But our view is that eSports will be as big for betting as what people perceive as core American sports.”

Levy added, “It’s a bit of a Canadian stereotype to say, ‘Hockey, hockey, hockey.’ Now, obviously Canada loves hockey. And we will do more handle on hockey than we do in the U.S.

“But you’ll see tremendous activity on all North American sports — and U.S. college sports are very popular here, too.”

Groumoutis said that for a new group of what will be casual bettors, in a post-COVID era the games of betting choice “will be what’s on in the bars and pubs — what can they watch on TV?”

All provinces are not alike

Just as sports betting expansion in the U.S. had had regional elements — with the Northeast and Midwest showing a heartier appetite for legalization than Southern and Western states — Canada expansion also will come more quickly to some provinces than others.

The market leader is likely to be Ontario, which is the fifth-largest jurisdiction in North America (behind New York and ahead of Pennsylvania) and, it seems, soon to be the largest with single-game mobile sports betting. California, Texas, and Florida have made only modest headway on the issue, and New York State so far only offers sports betting at upstate commercial casinos and their tribal counterparts.

“Even though [the federal government] picked up on single-game betting in the fall, the provincial government in Ontario introduced the objective of modernizing in April 2019,” said Levy, whose company is based in that province. “TheScore has been very involved in consultations with all levels of government, and we are pleased how things are progressing.

“Everybody sees the eye-popping numbers out of New Jersey [with nearly a $1 billion handle in December], but you will see that and more in Ontario.”

As for British Columbia on the West Coast, Groumoutis said, “We will be watching Ontario closely — seeing what controls are in place, what the licensing model is, how efficient it is.”

Segev said that while it might seem “peculiar” to some should British Columbia adopt a sports betting monopoly model through the lottery, provincial government management of a wide swath of operations “is part of the everyday fabric of life here. That’s culturally how a lot of things happen.”

Johnson, whose experience in advocating for single-game betting options dates back to the 1990s, said, “I’m a fan of regulation — and taxing it. Either Canada gets the benefit, or it goes somewhere else.”

“We don’t have legal clarity, policy clarity,” Johnson added. “There are so many great, well-paying jobs of the type that all provincial governments are trying to develop onshore.”

The relatively smooth experience of the U.S. sports betting expansion has been a boost for Canadian supporters.

“We didn’t see any of the stories that policymakers worried about — kids betting, or people losing their shirts,” Segev said.

Said Groumoutis: “What everybody is recognizing is that you can offer online betting in a safe fashion. And if we don’t provide the opportunity, all we are doing is pushing [bettors] to the illegal market where there aren’t those safeguards.”