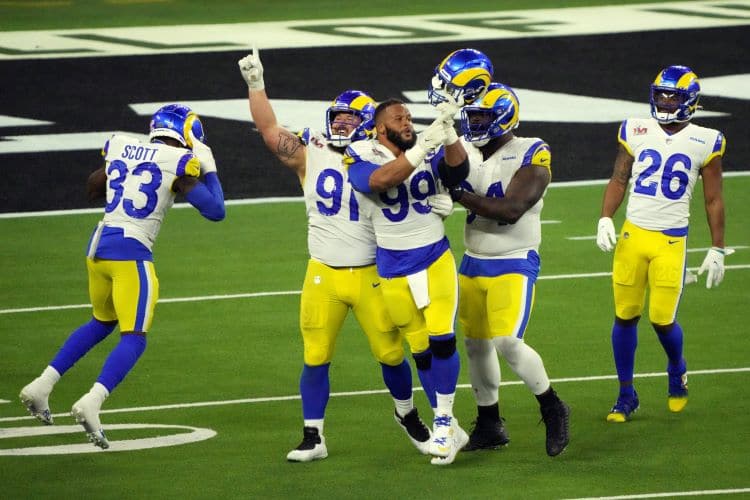 Now that the dust has settled following the Los Angeles Rams’ 23-20 victory over the Cincinnati Bengals in Super Bowl LVI, Canada‘s provincially run sportsbooks are reporting record-breaking numbers again this year from the big game.

According to early data released by Numeris, Super Bowl LVI saw an average audience of 8.1 million viewers across Canadian networks Sunday, making it the biggest broadcast event of the year. Roughly 45% of the Canadian population (or 17 million people) tuned into the Super Bowl at some point throughout the evening, with audiences peaking at 11.4 million viewers during the halftime show.

PROLINE + had more than 80 offerings for the Super Bowl and offered a pair of promotions, including matching first deposits up to $500 for new users and a $100 sports bonus on wagers placed specifically on the Super Bowl. It also became the first sportsbook to partner with the NFL in Canada. With a population of roughly 15 million in the province, Ontario’s bettors made up the overwhelming majority of Canadians wagering on the Super Bowl.

OLG wouldn’t report specific financial details for the event, but said it did see a “significant number of new customers” sign up on PROLINE + due to the promotions. Wagering and the amount placed per bet also increased significantly for the Super Bowl in comparison to previous NFL playoff and regular season games, according to OLG’s communications department. Live in-play markets accounted for roughly 10% of total sales.

OLG also debuted a new sports betting show titled Game Plan prior to the Super Bowl. The show is co-hosted by former CFL receiver and The Bachelor Canada star Brad Smith, and legendary quarterback Joe Montana was the first guest.

Want to hear @JoeMontana's thoughts on who will win Super Bowl LVI?👀 @bradcsmith & @SmrtAsh have the whole scoop on #OLGGamePlan! Watch now!

ALC’s PRO•LINE had recorded single-day revenue records annually on Super Bowls during the past decade, and this year was no different. Handle, profit, online revenue, and active bettors all comfortably set new records as bettors in the provinces of Nova Scotia, Newfoundland and Labrador, New Brunswick, and Prince Edward Island flocked to PRO•LINE games.

Single-event sports betting was made legal in the province of Nova Scotia last Friday, just in time for the Super Bowl. Singles made up almost 40% of the province’s Super Bowl bets on the weekend, according to ALC Sports Betting Manager Scott Eagles. Overall, half of PRO•LINE’s online handle for the Super Bowl, and over a quarter at retail, came from singles.

“Thankfully, a lot of the props and parlays went our way. While the moneyline saw the Rams take in just under half of all handle, bettors largely took Cincy on the spread (62%) and the under on the total (64%). We also had two sets of winning margins available where bettors spread their money as evenly as you could hope for among our available options. Our Stadium Bets game markets were wildly popular, where bettors loved our low hold moneyline, spreads and totals. We maintain a vig around 2.5% on Stadium Football spreads,” Eagles said.

ALC offered over 50 props for the game, and the sportsbook turned some nice profits on its heaviest-bet props, like the under hitting for both of the starting quarterbacks on passing yards and Joe Burrow failing to rush over 11.5 yards.

“The popularity of the ‘coin toss’ never ceases to amaze me. It was one of our best sellers, again, with 56 percent of bettors picking the winner,” Eagles noted.

On PlayNow.com, there was a lot of action on both teams, including a majority of point spread bets on the Bengals at +4. As for other popular options, over 64% of PlayNow.com bets on total points took the over.

PlayNow.com players who bet on Beckham to score the game’s first touchdown were paid out more than $27,000 (CAD). Some other positive outcomes for bettors included wagers on Burrow to go under 11.5 rushing yards and Beckham to go under 65.5 receiving yards.

The province of British Columbia, and the CFL, inadvertently received a huge PR boost during the Super Bowl from Vancouver-born actor Ryan Reynolds, who posted a picture on Instagram with comedian Will Ferrell decked out in his BC Lions gear.

Will keeps asking why there’s no fourth down. pic.twitter.com/0DMaKm9Zni