Gov. Doug Ducey was part of crowd for Thursday's ribbon cutting; venue opens to public Sunday in time for Cards-Chiefs 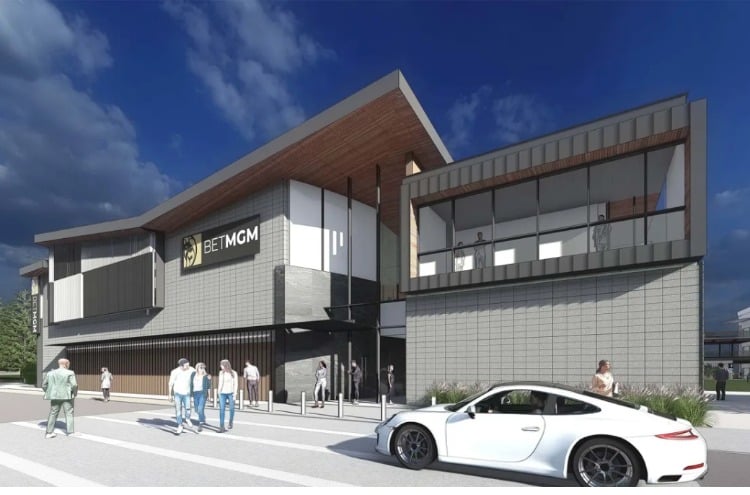 On the first day of the 2022 NFL season and 364 days after the first bets were placed in Arizona, the Arizona Cardinals and BetMGM made history. The pair hosted a ribbon cutting Thursday for the first retail sportsbook at an NFL stadium anywhere in the U.S. It is the sixth sportsbook at a pro sports venue to open in America, and the third in metro Phoenix.

The opening is significant not only because it’s a first, but also in the context of this NFL season, which will culminate with the Feb. 12, 2023, Super Bowl in Glendale, marking the first time since the Professional and Amateur Sports Protection Act was overturned in 2018 that the game will take place in a legal wagering state.

The Cardinals will host the Kansas City Chiefs Sunday on the first full day of the NFL season.

“The opening of a BetMGM sportsbook at the State Farm Stadium is a historic development for Arizona sports betting,” Arizona Department of Gaming Director Ted Vogt told Sports Handle. “In addition to new sports betting opportunities for fans throughout the season, next February Arizona will be the first state to host a Super Bowl with legal sports betting.”

The BetMGM Sportsbook at State Farm Stadium won’t open to the public until Sunday, the first full day of the NFL season, but on Thursday, Gov. Doug Ducey and Arizona Cardinals owner Michael Bidwell were among the dignitaries at the event, at which the first bet ever was placed at an NFL stadium retail sportsbook. The new venue is located on the north side of “The Great Lawn” and is not attached to the stadium. The modern building is set between two parking areas, making for easy access.

Is this the ceremonially opening of the BetMGM Sportsbook?

“The BetMGM Sportsbook at State Farm Stadium is one of the most revolutionary additions an NFL stadium has seen in decades and unlike anything fans have encountered on gamedays,” BetMGM CEO Adam Greenblatt said via press release. “BetMGM shares the Arizona Cardinals’ vision in pursuing new ways to break barriers and entertain fans.”

BetMGM joins FanDuel and Caesars Sportsbook as operators with open retail locations at professional sports venues in Arizona. FanDuel opened its state-of-the-art sportsbook at Footprint Center on Sept. 9, 2021. The facility has access from both the street and the concourse inside the arena. Caesars began taking bets via kiosk at Chase Field last fall and opened its permanent sportsbook June 21. It features wall-to-wall flat-screen televisions in a two-story venue that also has an outdoor patio complete with televisions.

So far, lawmakers in Arizona, Illinois, Maryland, Ohio, and Washington, D.C., have made it legal to have a sportsbook at or adjacent to a professional sports stadium. The first to open was the Caesars Sportsbook at Washington, D.C.’s Capital One Arena in August 2020. Retail books at Audi Field (FanDuel) and Nationals Park (BetMGM) have opened there since.

It’s likely that the next wave of pro stadium sportsbooks will open in Chicago, where construction is underway at the United Center (FanDuel) and Wrigley Field (DraftKings). In Maryland, where in-person wagering is live, the NFL Commanders and FedEx Field were approved for a sportsbook, though no partner has been announced. Wagering is not yet live in Ohio.

In Arizona, the State Farm Stadium sportsbook is the 25th retail location to open. There are currently 18 digital platforms that are tethered to professional franchises and tribal casinos and available to bettors.