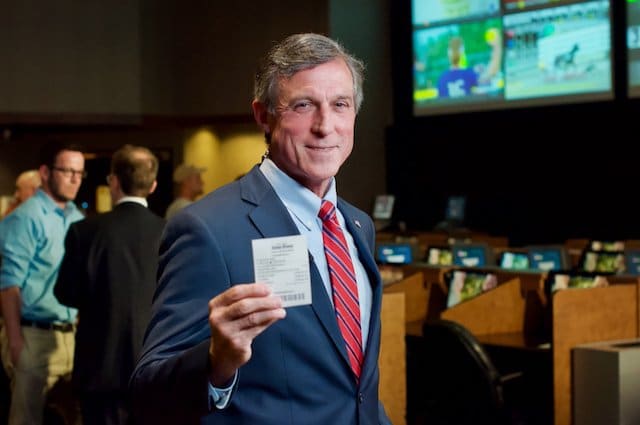 The governor, who had his choice of placing a bet on professional baseball, football, hockey, basketball, soccer, golf, or auto racing, laid down $10 on the Philadelphia Phillies at the Chicago Cubs tonight.

The bet, which capped off a jovial press conference, was delayed a bit as Carney, who was beaming and brimming with enthusiasm, patted down all of his pockets before he located the $10 bill he had tucked away for the bet.

Governor Jay Carney Is First to Lay Down Legal DE Sports Bet, Putting $10 on the Phillies.

Carney said that prior to the press conference, there were some quips about what he would bet on, but he assured those watching that “there will be no bets from this governor for any team that is not a Philadelphia team.”

Carney, who admitted to singing the Philadelphia Eagles fight song since they won the Super Bowl in February, was clearly thrilled to see the fruition of his and the state’s hard work.

“Delaware became the first state … and we were the whole country for about a week,” he said. “Then the rest of the states joined us. We’re delighted to be first again today.”

After the bet was made, all three of Delaware’s casinos – Dover Downs, Harrington Raceway and the Casino at Delaware Park were open for business.

Delaware has long been preparing for single-game sports betting. The state was one of three outside of Nevada that was grandfathered in under PASPA to have single-game sports wagering, and was prepared to do so in 2009. But that effort landed Delaware in the Third Circuit Court of Appeals against the pro sports leagues, which is where New Jersey eventually wound up as well in the battle that made its way to the Supreme Court.

Delaware has had a Legal Sports Betting Framework in Place Since 2009, and Needed Only a Few Weeks of Training and Review to Get DE Sports Betting Up and Running.

“It’s an exciting day here in Delaware, but days like this don’t happen by accident,” Eisenberg said at a press conference. “The Carney administration and the casinos have been preparing for the possibility that the Supreme Court would invalidate PASPA for the past for six months … it’s a great example of how Delaware moves quickly and nimbly.”

Eisenberg said that since the Supreme Court decision on May 14, staff has been testing and developing software, training staff and even considering logos. He said the state has been training staff, at casinos, the state lottery and regulatory offices.

To that end, the first lines were posted at Delaware Park before 8 a.m. and potential bettors were gathered at all three casinos in anticipate of placing bets.

After Carney placed his bet on the Phillies, Stu Fiener of Long Island became the first civilian to lay down a bet. Fiener appears well-known in betting circles  — and he didn’t mess around (see below):

As of now, sports betting in Delaware is limited to in-person wagers at the state’s three commercial casinos. And among the oddities of the rollout is this – bettors must be 18 to bet on horse races, but 21 to place a single-game sports bet.

The odd quirky thing Delaware sports betting here at Delaware Park is that you only have to be 18 to bet on the horse races here but you have to be 21 for the sports betting starting today. So security will stand at self serve betting terminals carding bettors @FOX29philly pic.twitter.com/1p14Pc9xTz

While Delaware will go down in history as the first post-PASPA state to have sports betting, it won’t be – like when it was the only state – alone for long. New Jersey’s Monmouth Park is planning to roll out sports betting as early as Friday, after both senate and assembly committees pushed through sports betting bills on Monday. A vote is expected in both chambers on Thursday.