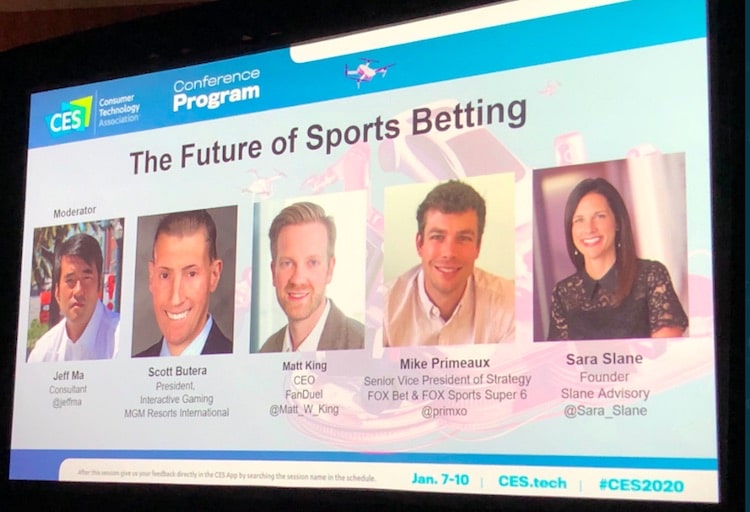 At last week’s Consumer Electronics Show in Las Vegas, a distinguished panel of sports gambling experts peered into a crystal ball during a session on the future of sports betting.

Jeff Ma, an sports wagering industry consultant and moderator of the session, asked the panelists to predict the yearly handle of the U.S. legal sports betting market by 2030. The responses fluctuated wildly from $80 billion annually to as high as $500 billion. Since the overturn of the Professional and Amateur Sports Protection Act (PASPA) in May 2018, U.S. customers have legally wagered more than $15 billion on sports, according to the American Gaming Association (AGA).

Sara Slane, a former senior vice president of public affairs of the AGA, admitted that her projection of $500 billion may be too ambitious. When applying historical Nevada sports betting figures to all 50 states, the handle for a fully mature U.S. sports betting market projected to around $150 billion, Slane indicated. The projections are also complicated by uncertainties such as the pace of expansion on the state level, consistencies in tax rates and the proliferation of mobile betting.

Ultimately, the panelists agreed that the industry should focus on curbing activity on the black market with the intent of bringing consumer dollars back onshore. FanDuel CEO Matt King opened the session with an anecdote that captures the scope of the illegal sports betting market.

Over the first six months of sportsbook operations in New Jersey, FanDuel research showed that 9 of 10 customers it acquired came to the site after previously placing a wager on the illegal market. Some window tellers who planned on writing the majority of their tickets on straight win bets, instead wound up taking a considerable amount of action on multi-leg parlays.

“We suddenly put our educational materials in the back and hid them away because they weren’t needed,” King said.

Interesting views of bettor player segments as @Matt_W_King said 9 of 10 players aquired in NJ were experienced bettors while @Sara_Slane said "There is going to be a whole player acclimation period that will have to occur" to educate new bettors. #CES2020 #sportsbetting pic.twitter.com/IZZEaRTa9p

Another panelist, FOX Bet SVP of Product & Strategy Mike Primeaux, predicts that the handle a decade from now will be around $175 billion annually. On a macro level, Primeaux monitors spending per adult in other top markets such as Australia and the U.K. as a comparison tool. The pace of legalization on a state-by-state basis is largely beyond the operators’ control.

Slane, who launched her own advisory group last year, indicated that a player acclimation period will transpire for certain segments of the markets that are new to sports betting. She emphasized that the growth of sports gambling among women is a key demographic to watch.

Each year, the show on the Las Vegas Strip is widely viewed as the world’s largest top technology conference drawing thousands of participants from around the globe.

Monumental Sports & Entertainment Senior Vice President of Strategic Initiatives Zach Leonsis did not set a timetable for when a sportsbook inside Capital One Arena will begin accepting wagers on sports. Leonsis said the property is under renovation and that he expects the book to open at some point in 2020, pending regulatory approval.

In October, Monumental Sports and William Hill US unveiled plans to build a sportsbook inside the venue.

“Our goal is that the renovations are totally complete and top notch because first impressions matter and we want the first impression to be a spectacular one for Washington D.C. and a great reflection on our company and William Hill,” Leonsis told Sports Handle.

Capital One Arena has filed for a Class A, provisional license with the DC Lottery’s Office of the Chief Financial Officer. As of Jan. 10, the application was still under review.

BREAKING: Capital One Arena has filed the first application for a DC #sportsbetting license and has asked for a provisional license while awaiting @DCLottery review. Still unclear whether that could be approved in time for #SuperBowl. #NBC4DC pic.twitter.com/9MIQhJJeda

As the home of the NBA’s Washington Wizards and the NHL’s Washington Capitals, Capital One Arena is on track to become the first U.S. professional sports venue to feature an in-stadium sportsbook. Monumental Sports does not own an equity stake in the sportsbook, Leonsis said.

Leonsis also believes that 5G technology has tremendous implications for the sports betting industry down the road due to latency issues associated with broadcast streaming. He envisions a scenario one day where streaming customers could be offered a package with a separate betting feed alongside a traditional broadcast. The technology for developing broadcasts with zero-latency streaming is not advanced enough at the moment.

“I know there are incredible challenges when it comes to zero latency streaming in broadcasts, but in the future anything can happen,” he added.

In-play or “micro” betting on the next play to occur in a game also served as a hot topic at the conference. The NHL is set to roll out its player and puck tracking technology this season, technology that will enable sportsbook partners to offer various props on the fastest skater or player with the fastest slap shot over the course of a game.

MGM Resorts indicated that it’s unlikely the bet types will be offered for the Stanley Cup Playoffs.

“It still has to go through a regulatory process, could we get there in time for the Stanley Cup? That’s more of a question for the NHL,” said Scott Butera, president of interactive gaming at MGM Resorts.

The timetable for the rollout of pitch-by-pitch for MLB betting is also uncertain.

Ma pressed King on how in-play betting can flourish over the next decade if operators frequently use tools like built-in delays and intentionally reject wagers in order to manage risk. The tactics are viewed unfavorably by sharp bettors. King expects that only a small percentage of in-play bets at FanDuel will be rejected in the coming years.

Numerous participants from the industry also attended a sports betting summit presented by Vegas Stats & Information Network (VSiN) at the SouthPoint Casino Hotel & Spa Jan. 8. Brent Musburger, host of VSiN’s My Guys In The Desert show, was asked if a network will add live, in-play odds to the bottom line of their NFL broadcasts anytime soon.

Musburger, the former host of The NFL Today on CBS Sports in the late-1980s, also worked for ESPN and ABC Sports for nearly 30 years.

“None of them will do that until the league says you can,” Musburger said. “The league hasn’t said that, nor will they give permission right now.”