This week we have six plays, including a rebound spot for Oregon and LSU getting over two touchdowns at home versus Alabama.

Oregon is my favorite play of the season so far, assuming quarterback Justin Herbert plays. Herbert suffered a concussion in last week’s loss to Arizona but returned to practice Wednesday.

Nothing went right for the Ducks in Tucson. It was an awful spot for them coming off two emotional games against Washington and Washington State. I looked hard at fading the Ducks last week but just couldn’t trust Arizona.

While last week was a terrible spot for Oregon, this week is the exact opposite. Chip Kelly returns to Eugene where he was the head coach for four years and led the Ducks to the National Championship Game. His UCLA Bruins are coming off a 31-point loss to Utah and have dropped 10 of their last 11 conference games on the road by an average of 16 points.

Oregon has Utah on deck but because they got hammered by Arizona, the Ducks can’t afford to look past the overmatched Bruins. Nothing went right for Oregon against Arizona. It’s one of those games you just throw away because Oregon simply didn’t show up. Expect them to show up Saturday with Kelly in town.

Oregon is 4-1 at home this season. The Ducks’ only loss was to Stanford when they fumbled running out the clock. I expect Oregon to roll at home on Saturday. This line should be up to two touchdowns by kickoff. It opened Oregon -13 then dropped to 7.5 when  Herbert was questionable Tuesday. It’s back on the rise, so if you like the Ducks, grab them as soon as possible.

Last week I took Kentucky as a +7 underdog against Missouri and they won outright. One thing I pointed out was the big difference in Missouri quarterback Drew Lock’s production when he plays good and bad teams. He was just 15 of 27 for 165 yards with no touchdowns against Kentucky. Lock’s numbers are great against weaker competition but he has a TD to interception ratio of 21-28 versus Power 5 bowl opponents.

He’ll face a tough test on Saturday against a Florida defense that ranks 11th in defending the pass, allowing just 170 yards per game. Meanwhile, Missouri’s pass defense has struggled all year ranking 94th in the country. Florida quarterback Feleipe Franks threw for only 105 yards in the loss to Georgia. He’ll find the Missouri defense much more giving. The Tigers allowed Kentucky quarterback Terry Wilson to throw for 267 yards. He didn’t have more than 167 yards through the air in any game this season before last Saturday.

Both of these schools are coming off tough losses. Florida lost to rival Georgia 36-17 but that score was 23-17 in the fourth quarter, so it was closer than the final suggests. Meanwhile, Missouri is coming off a brutal loss to Kentucky where the Wildcats scored on the final play of the game. If any team has a hangover, my money is on Missouri.

Kentucky is 2-6 ATS in its last eight games as an away dog and 0-3 ATS on the road this season. Oddsmakers like Missouri a lot more than I do given the Tigers’ lines the last two weeks. I’ll take Florida to bounce back at home laying less than a touchdown.

What a great spot for Ohio State. After getting blown away by Purdue 49-20-20, Urban Meyer and the Buckeyes had a week off to lick their wounds. Ohio State is 4-0 ATS the last four meetings against Nebraska and won the last three by an average of 42 points.

Nebraska is getting better but in two games on the road against Michigan and Wisconsin, the Cornhuskers were beaten by a combined 63 points. Now they have to travel to Columbus to face an angry Ohio State team that is very much still alive for the college football playoffs if they win out.

Typically, when Urban Meyer gets embarrassed, he gets back to smashmouth football. Ohio State rushed for just 76 yards against Purdue; the lowest total since Meyer has been at Ohio State. Expect him to crank up J.K. Dobbins and the running game against a Nebraska defense allowing 200 yards a game and 5.3 yards per rush.

This line opened up at Ohio State -20.5 and is down to 17.5 at many sports books. I usually don’t go against that type of line movement but this is a terrible spot for a young Nebraska squad on the road against a team that’s owned them recently. I’ll lay the points here.

The biggest game of the year so far pits undefeated Alabama versus one-loss LSU. As good as Alabama has looked this year, this line is a little overstated.

There’s no denying Alabama’s dominance, although look at the teams the Crimson Tide has played. Louisville and Arkansas are two of the worst teams in FBS. Who is the best team Alabama has beaten? Texas A&M? They’re 5-3 and just got beat down by Mississippi State.

In my opinion, this line should be around 11. LSU won in Auburn and destroyed Georgia. Those are tough games and if the Tigers can stay close into the second half, LSU will have an advantage because Alabama’s starters rarely play in the fourth quarter.

Alabama has dominated this series recently winning seven straight and the last five by double-digits. However, Ed Orgeron loves the underdog role. Coach O is 15-4 ATS versus SEC opponents and he’s covered six straight as an underdog.

LSU has lost by more than two touchdowns at home just once over the last four seasons, a 31-14 loss to Arkansas in 2015. Meanwhile, the Crimson Tide haven’t won by 14 or more points in Death Valley since 2006. I like LSU to stay within two touchdowns Saturday night.

The Georgia Tech offense is rolling. The Yellow Jackets have scored at least 49 points in three of their last four games. The one time they didn’t was against Duke. We had Duke in that matchup and pointed out how David Cutcliffe defends the option as well as any coach in college football. North Carolina isn’t Duke.

Last year when these two teams met, North Carolina gave up 403 yards rushing and 6.1 yards per carry to Georgia Tech’s option attack. So far this season, the Tar Heels give up 191 yards per game on the ground. Good luck stopping the Yellow Jackets.

These two teams usually play high-scoring games. Five of the last seven meetings have eclipsed 61.5 points and the OVER is 5-1 in Georgia Tech’s last six road games. I do believe UNC will be able to exploit Georgia Tech’s weak secondary enough to get the game OVER. I’m playing the Yellow Jackets and OVER here expecting a 49-31 kind of Georgia Tech victory. 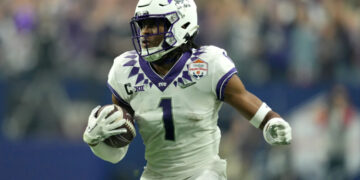