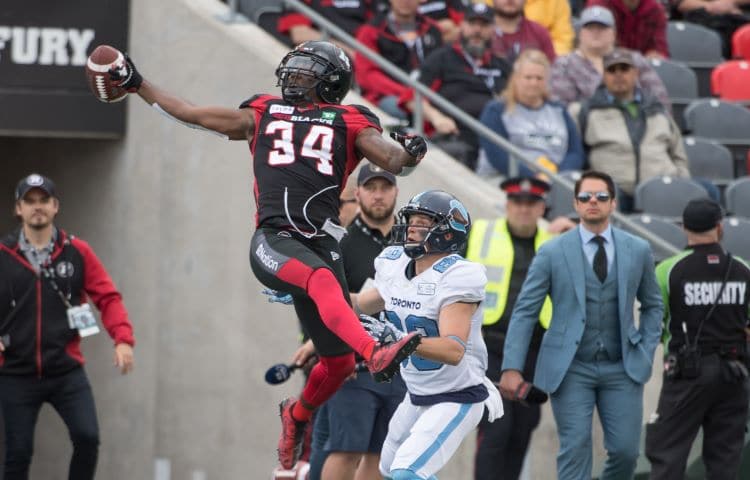 Still in financial straits after canceling the entire 2020 season due to COVID-19, the Canadian Football League reiterated calls on Wednesday for the legalization of single-event sports betting in Canada.

The addition of single-event sports betting will allow the CFL to partner with industry leaders in an effort to drive ticket sales and boost television ratings, CFL Commissioner Randy Ambrosie testified Wednesday evening in a hearing before the Senate Standing Committee on Banking, Trade, and Commerce. As with scores of other businesses throughout Canada, the CFL has been dramatically impacted by the global pandemic, Ambrosie told the committee.

While the CFL has already delayed the start of the 2021 season, the league intends on opening the campaign later this summer, Ambrosie said.

“The ability to grow our fanbase has never been more important or crucial to our future,” Ambrosie testified.

The ‘single greatest opportunity’ for the CFL

Ambrosie fielded questions at the hearing from Deputy Chair Larry Smith, a Conservative Party member from Quebec. Smith, a former running back with the Montreal Alouettes, spent nine seasons in the CFL, all with the franchise. Smith, the former No. 1 overall pick in the 1972 CFL Draft, later became the eighth commissioner in league history in 1992. The senator spent six years at the helm of the CFL before returning to the Alouettes as team president. Smith was elected to the Senate in 2017.

During the hearing, Smith inquired whether the prospect of mobile sports betting could increase the exposure of the league. Furthermore, he asked Ambrosie if the CFL has considered how it could pivot to accommodate a new, more diverse fanbase. In response, Ambrosie explained that the CFL has studied ways for creating connectivity and engagement with non-traditional fans.

Wednesday’s hearing started roughly an hour before Game 1 of the NHL’s North Division final between the Montreal Canadiens and the Winnipeg Jets. A free-to-play pick’em contest by Canadian network Sportsnet offers an NHL game-day prize of $1,000, along with entry into a draw for a new Dodge Ram 1500 Rebel truck. Sportsnet is owned by Rogers Sports & Media, a subsidiary of Rogers Communications, part-owner of the Toronto Maple Leafs.

The free-to-play contests allow a league or a sportsbook to engage with an audience before legal sports betting goes live. Although parlay wagering is legal in Canada in limited form, single-game sports betting is projected to generate about $10 billion for the Canadian economy as a whole, according to various estimates.

“This may be one of the single greatest opportunities the CFL has ever faced and it couldn’t happen at a better time,” Ambrosie said. “We see this as a recipe for a quicker recovery.”

Ambrosie previously penned a letter to the Canadian House of Commons enumerating the benefits of single-event sports betting to the league.

Ambrosie was unable to pinpoint an actual dollar figure on Wednesday when asked to project the revenue opportunity the CFL could derive from sports betting. Ambrosie did say that the element of sports betting could prompt viewers to tune in longer. The commissioner pointed to blowouts in basketball where viewers have shown a proclivity to stay with a broadcast for the final three minutes of a game to monitor the results of straight-win bets, along with props and other micro wagers.

Before COVID-19, the CFL lost in the neighborhood of $10-20 million a season in the years leading up to the pandemic, Ambrosie previously told the House of Commons. When the CFL went dark in 2020, the abandoned season created losses in the range of $60-80 million, the Toronto Star reported. But there are indications that single-event sports betting could bring each franchise an additional $2 million in revenue, plus $20 million for the league itself. The windfall could come from avenues such as increased attendance, merchandise sales, and possible sportsbook partnerships.

Some committee members raised concerns about match-fixing at Wednesday’s hearing. Diane Bellemare, a member of the Independent Senators Group from Quebec, questioned whether semi-professional leagues will have match-fixing safeguards as robust as larger leagues such as the CFL. Another senator, Pamela Walling, deputy chair of the committee, pressed the witnesses on if a specific amendment on match-fixing should be added to C-218, the bill that decriminalizes single-event sports betting.

In response, Canadian Gaming Association CEO Paul Burns testified that there are already provisions in the Canadian Criminal Code on match-fixing. Burns does not believe an amendment is needed. The CFL, Ambrosie added, has strong protocols protecting the league from match-fixing. In certain cases, it is within the league’s rights to suspend offenders for life, he said.

The clock is ticking

Separately, PointsBet announced on Thursday that it has appointed Nic Sulsky as chief commercial officer for Canadian operations in a move that signals the company’s intent to launch its products and services in Canada. Sulsky, a Toronto native, formerly served as president of Monkey Knife Fight, the third-largest daily fantasy sports operator in the U.S.

“Now that the legalization of single-game sports betting is close to final approval by the federal government, I’m looking forward to launching a truly Canadian platform that will not only provide good jobs in an exciting industry, but also offer Canadian fans an entertaining and engaging experience like no other,” Sulsky said in a statement.

The committee is scheduled to meet again on Friday before it files a report on its findings. The bill will then go to a vote before the full Senate. If it passes, some provinces could launch single-event sports betting by the fall, Burns testified Wednesday.

Senator David Wells, who is sponsoring bill C-218 that would amend the criminal code to allow for single-game sports betting in Canada, joins Rod Smith to discuss concerns that the bill might not get passed before June 25 when the Senate breaks for summer: https://t.co/soYSiXKudT pic.twitter.com/c80LwDkbKS

One committee member noted that Canada Prime Minister Justin Trudeau can suspend the legislature this summer while calling for an early election. Under the scenario, pending bills such as C-218 would fall to the wayside. The Senate adjourns for summer recess June 25.

“This legislation is long overdue, it has been long awaited, and should be carefully considered swiftly before the summer recess,” Ambrosie testified.