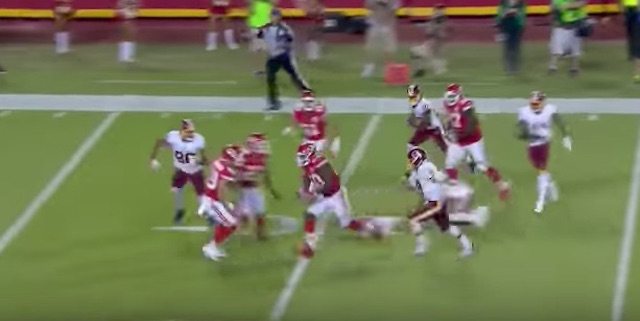 A cover is never a cover until the players have left the field, and even then it’s no sure thing. While some bettors began counting their winnings with four seconds remaining after Kansas City Chiefs rookie kicker Harrison Butker nailed a 43-yard field goal to put the Chiefs up 23-20 on Monday Night Football, veteran bettors knew four seconds of risk remained.

In most shops, the Washington Redskins went off as 6.5 or 7-point underdogs, putting them squarely in cover territory with a 3-point deficit. After a touchback following the field goal, Kirk Cousins took a shotgun snap and threw a short wide receiver screen to Jamison Crowder, who had blockers set up for a few yards but no space to run. So he chucked it backwards to Kirk Cousins, who couldn’t field the lateral. Redskins bettors gasped.

Tight end Jordan Reed picked up the ball when some players thought the play was over. It wasn’t. Live ball. Reed then handed it off to running back Chris Thompson, who got drilled by a pair of Chiefs near the 15, then he dropped the ball and Chiefs star linebacker Justin Houston grabbed it at the 12-yard line, leaving only Kirk Cousins and Jordan Reed to make a tackle. Good luck to offensive players against Houston, who charged toward the end zone.

“This might be meaningful to some” intoned Monday Night Football announcer Sean McDonough. He added, “We were told that the spread was 7.”

Indeed it was, and the 29-20 final score gave the win to Chiefs backers. The Redskins led for stretches of the game and looked like they might win outright until their defensive players started dropping like it’s hot (it was pretty warm on the field). The Chiefs cover was certainly not “deserved” to the extent that the Redskins proved to be the right side. But the right side is not always the winning side, and that’s part of what makes sports betting so exciting, exhilarating and for Redskins bettors here, excruciating.

The goofball touchdown didn’t matter only to the spread. As the Chiefs threatened to score in the final minute, the game total came into focus. It was 47.5 at most sportsbooks. Like the Redskins cover, the under looked safe when the Redskins held Kansas City to a field goal try. Had the rookie kicker missed, overtime could have easily resulted in an over if one team opened with a field goal on the first drive. So, sweet relief for the under — for a few minutes.

And so the circus touchdown wrecked the under as well — moving it up to 49 and a very unlikely win for the folks on the over. What a wild way to cap off Week 4 and a reminder to never count your winnings until they’ve hatched.

And it had big fantasy implications as well! More on that from Yahoo! Sports’ Andy Behrens:

Week 4's bad beat is 1 of the worst ever! Many can relate as 7.6% of drafted H2H Yahoo leagues won on KC's fumble recovery & TD #FFLBadBeats pic.twitter.com/x0YPwh1nPX