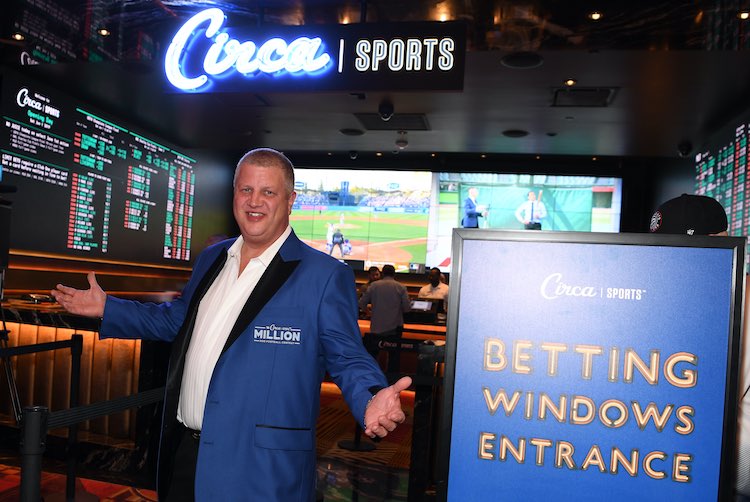 Derek Stevens at the Circa Sportsbook opening in 2019 (Photo: Denise Truscello)

Buoyed by the success of its debut NFL pick ’em contest, Circa Sports is going bigger for the 2020 NFL football season, announcing Tuesday it has raised the guaranteed total prize payouts to $3 million for the Circa Million II contest while again offering a $1 million top prize.

The contest, in which bettors make five picks against the spread each week of the pro football season, was an instant hit according to Circa Las Vegas owner Derek Stevens, who had 1,875 entrants last year to cover the $1.5 million in prize money awarded and is eager to build on the momentum created.

“We had such an incredible turnout for the very first Circa Sports Million Pro Football Contest that we had to keep the fun going,” Stevens said. “From game-day wagering to season-long competitions, we are excited to continue to offer unique betting opportunities to players across the country.”

Registration for the Circa II Million begins March 6, with registration available at Golden Gate or the D Las Vegas at $1,000 per entry with a maximum of three entries. Along with the $1 million top prize, there will be a total of 50 season-end prize-winners — a large increase over last year’s top 10. Non-Nevada residents may register a proxy to submit their picks for them each week.

The Circa Million II will again award quarterly prizes each month, with a higher payout in 2020. A total of $250,000 is available each quarter for the top-three finishers, including a $150,000 top prize. That’s higher than those offered this year in the Las Vegas Westgate SuperContest, probably the most well-known NFL pick ’em contest, which will pay out $100,000 to its quarterly winners, plus $25,000 to second and $10,000 to third each quarter of the season.

“The greatest response was that people really enjoyed the quarters,” Circa Sportsbook Operations Manager Jeff Benson told Sports Handle, noting that it gave players who had a poor start greater incentive to play throughout the season. “Some of the things we brought into Year 2 and improve upon was paying out more than the 10 players in Year 1.

“People wanted the pay scale to be deeper and flatter, not as top heavy. You’re not going to get everything right and we’re not naive to that. We want to be receptive to what our players are looking for, and that was for the pay to be a little deeper. The quarters were well received, so we increased the pay there.”

Additionally, the first two quarter winners of the Circa Million II will also be given hotel rooms for the opening night of the Circa Resort & Casino, which is currently scheduled to open in December 2020. Should there be more than 3,000 entries (at $1,000 per entry) to cover the $3 million in guaranteed payouts, the money from the overage would be put towards the prize pool for the quarterly winners.

Last year, “Booty Blockers-1,” the alias of an entry submitted by Isaac Meier, accumulated 58.5 of a possible 85 points with his picks to claim the $1 million top prize, compiling a record of 57-25-3 against the spread. The top 10 finishers split a total of $1.3 million in prize money.

The SuperContest, meanwhile, doled out nearly $1.5 million to its first-place finisher last season and will pay out to its top 100 finishers in 2020.

Also new this year at Circa Sports is a “booby” prize of $100,000 to the person with the fewest points accumulated over the course of the season, provided that entry submits all five picks for all 17 weeks. Benson gave full credit to Stevens for this new feature for Circa Million II and is intrigued by the possibilities of how contestants could play to “win” that prize at the other end of the standings.

“The booby prize is something that creates fantastic game theory, a contest within a contest,” Benson said.  “People sign up, make picks and the line moves, and they take the line mover and take the win … There’s going to be a subset of individuals who focus on winning the booby prize because not as many will try to win the million dollar prize.

“They may be going against line movements and fade the general public or the top consensus plays because there may not be as many people trying to compete compared to the ones going for the million.”

And once again Circa will not be taking any rake — with all entry fees going toward prizes for the players.

.@CircaSports will be joining the party in Colorado, bringing its mobile sports betting app to CO through a partnership with Century City Casino in Cripple Creek. pic.twitter.com/htiRXfyIv9

Circa Sports is also offering a $1 million guaranteed top prize for a new NFL survivor pool contest. The entry fee is also $1,000 with a maximum of five entries. A bettor picks one team per week to win its game straight up and is not allowed to use that team for a pick for the remainder they stay alive in the pool.

One interesting twist is Circa Sports has made pro football games played on Thanksgiving a standalone “leg,” which means the season will consist of 18 legs. It could require bettors to be more judicious knowing they may have to stash one of the six teams playing to remain eligible should the contest reach late November.

Benson again gave Stevens full credit for devising the Thanksgiving standalone and confirmed a bettor would be eliminated if they did not have any of the six teams available to select had they reached that point with a chance to win.

“We felt to offer an additional $1 million bonus, we had to provide our contestants with a game theory element or a week that made it hard on the participants to choose things,” Benson explained. “Thanksgiving week was a great additional week to make it 18 weeks, having a standalone and having contestants debate throughout the year — use a team in Week 3 and not use them on Thanksgiving added ingenuity and creativity in terms of structuring the contestant’s strategy.”

In addition to the $1 million prize for the survivor pool winner, an additional $1 million “Undefeated Bonus Prize” will be awarded if a bettor records a perfect 18-0 record. Benson said that if a bettor had clinched the $1 million prize before Week 18, they will be allowed to continue making picks in a bid to win the additional $1 million. He added that money comes out of “their pockets,” meaning Benson, Stevens, and Matt Metcalf, Circa’s Race and Sportsbook Director.