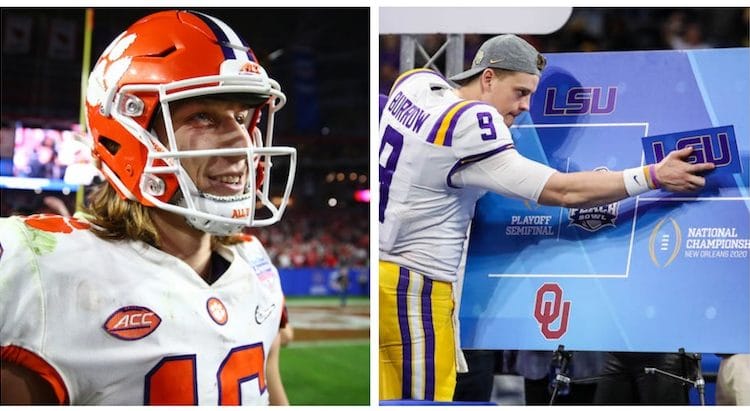 It’s a matchup that has a little bit of everything: the defending College Football Playoff champion in Clemson seeking a third title in four years, the current Heisman Trophy winner in LSU quarterback Joe Burrow, two elite offenses that can put up piles of points but also two defenses that have the ability to slow down the other.

Monday night’s showdown at the Mercedes-Benz Superdome in New Orleans between No. 3 Clemson and top-seeded LSU will end with either Clemson entering the conversation as one of college football’s best dynasties or LSU completing one of the most remarkable seasons in recent history on the strength of its standout quarterback.

LSU opened as a 3-point favorite, which prompted a run of betting on the SEC champion and pushed the line to 5.5 or six points depending on the online sportsbook. DraftKings, FanDuel, PointsBet, and BetRivers all list Ed Orgeron’s team as a 5.5-point favorite as of Friday morning, and LSU is ranging as a moneyline favorite between -210 and -238.

Clemson, which is looking to win its 30th straight game since its loss to Alabama in the 2017 CFP semifinal, has a more narrow range as a money line underdog between +175 and +185. The over/under has been listed at 69 and 69.5 points at various sportsbooks.

For a team that is the defending College Football Playoff champion, Clemson (14-0) has essentially flown under the radar for most of the season. Dabo Swinney’s squad tore through the Atlantic Coast Conference — only North Carolina lost by less than double figures — and the Tigers coach has made a point to convince anyone and everyone who will listen that nobody expects them to win and nobody wanted them here in the first place.

What Clemson does have, though, is a winning pedigree. This is its third trip to the CFP final in four years, and the moment will not be too big for sophomore quarterback Trevor Lawrence after shredding Alabama in last year’s final and rallying his team past Ohio State 29-23 in the Fiesta Bowl semifinal two weeks ago. Lawrence has quietly put together better numbers than last season, throwing for 3,431 yards and 36 touchdowns with only eight interceptions. On the ground, he showcased his dual-threat abilities by rushing for 514 yards and eight scores.

Lawrence’s elusiveness keyed Clemson’s comeback versus the Buckeyes as he slipped past defenders and raced 67 yards for a touchdown. He also threw two touchdown passes — both to running back Travis Etienne — furthering his status as a big-game quarterback. In three CFP games, the 20-year-old has racked up 933 passing yards and eight touchdowns without an interception.

Trevor Lawrence takes the ball 67-yards up the gut for a TD.

Though Etienne was held to 36 rushing yards by the Buckeyes, the two-time 1,500-yard rusher had a career-high 98 receiving yards. He also has bonafide big-game chops with seven total touchdowns in Clemson’s three playoff games and 231 rushing yards on merely 34 carries. Tee Higgins is still Lawrence’s top receiving option with 56 catches for 1,115 yards and 13 touchdowns, but he and Justyn Ross were knocked around by Ohio State’s secondary and will face a similar challenge from LSU’s defensive backs.

Clemson’s pass defense is in for its biggest battle of the season as it tries to slow down Burrows and LSU’s high-octane offense. The ACC champion is the top-ranked team in the country when it comes to passing defense, holding opponents to 151.5 yards per game and is also the top team in the nation when it comes to scoring defense, conceding just 11.5 points per contest.

There were flashes of Burrow’s skill last season following his transfer to LSU from Ohio State, but no one would have expected him to amass the video-game numbers he has put up in his first season operating passing game coordinator and wide receivers coach Joe Brady’s offense. Burrow has thrown for a staggering 5,208 yards and 55 touchdowns and is on pace to set the NCAA’s single-season completion percentage mark as he enters this contest with a 77.6 percent accuracy rate.

Most touchdowns thrown into a tight window (per @PFF)

If Joe Burrow was a stock, I’d literally invest my savings in him. pic.twitter.com/74ZEDMab5S

And those numbers have not come against fluff competition. Burrow has faced six AP Top 10 teams this season and thrown for 2,320 yards and 22 TDs with only two interceptions while LSU has won all six contests. He obliterated Oklahoma’s defense in the semifinals, racking up all seven of his scoring tosses in the first half as LSU rolled to a 63-28 victory in the Peach Bowl.

Burrow has an elite trio of receivers in Ja’Marr Chase, Justin Jefferson, and Terrace Marshall Jr. They have combined for 48 touchdown receptions, with Chase and Jefferson grabbing a school-record 18 apiece that also match the SEC single-season record. Jefferson set overall Peach Bowl records with 14 catches for 227 yards and four TDs versus Oklahoma and leads the team with 102 receptions while Chase has a team-best 1,559 yards.

While Burrow and the passing game get most of the accolades, running back Clyde-Edwards Helaire remains a dangerous option on the ground with fresh legs. He had just two carries versus Oklahoma but enters the Superdome with 1,304 yards while averaging 6.6 yards per carry.

LSU does not have a standout defense, ranking 29th in scoring with 21.6 points per game allowed, but Ed Orgeron’s team does have a plus-9 turnover margin after recording 21 takeaways. Derek Stingley and Kary Vincent have combined for 10 of the team’s 17 interceptions, with Stingley tied for fifth nationally with six.

Edwards-Helaire UNDER 99.5 rushing yards (-110 on DraftKings): Clemson’s standout pass defense should result in Edwards-Helaire getting more touches than he did versus Oklahoma, but asking the LSU running back to reach the century mark for the first time in four games in such a high-pressure spot appears to be too big an ask. Clemson is yielding just 3.1 yards per carry on the season, and while it occasionally gets gashed for a chunk play, that total looks to be out of sight considering the proficiency of LSU’s passing attack.

Clemson +12/OVER 63 points teaser (-110 on PointsBet): Excluding Alabama’s 2017 victory over Georgia, the other four CFP championship games have resulted in point totals of 60 or higher. It is dangerous to underestimate Clemson’s championship mettle, especially against an LSU team that has only a “good” defense as opposed to a great one. Another point to consider is how LSU and Alabama raced past the over/under of 65.5 points earlier this season with expectations the defense would prove challenging.

Ja’Marr Chase OVER 101.5 receiving yards (-112 on FanDuel) — After being held to a combined 102 receiving yards in the last two games, the expectation is for LSU to get Chase involved early and often to set an offensive tone. Chase had 123 or more yards in LSU’s first four games versus AP Top 10 opponents this season and his deep-threat capabilities means he may be able to clear this total on as few as four receptions.