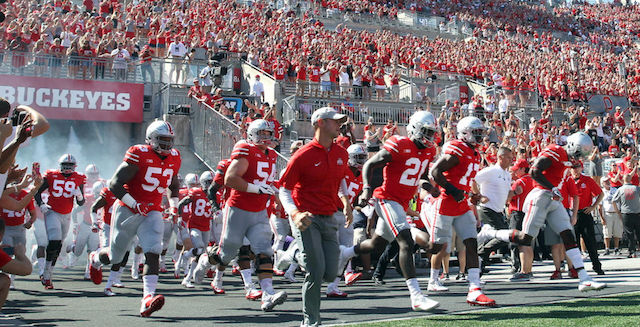 Since Penn State’s loss at Minnesota in early November, there has been little variance in the Top 4 of the College Football Playoff rankings, as the same four schools have projected as national semifinalists in each of the last four weeks.

A defeat by Georgia in Saturday’s SEC Championship against LSU will likely create a shakeup near the top, opening the door for Utah, Oklahoma or Baylor to claim the final spot in the four-team playoff. Although No. 1 Ohio State and No. 2 LSU appear close to securing trips to the semis, no team should feel safe heading into Saturday’s conference championships. With the stakes high before the CFP committee releases its final rankings on Sunday afternoon, bettors will have a surfeit of options throughout the weekend.

At PointsBet USA, Ohio State is a slight favorite over Clemson and LSU to win the national title. The undefeated Buckeyes are pegged at +180 to prevail on Jan. 13 in New Orleans, ahead of defending national champion Clemson (+200) and SEC West champion LSU (+200). From there, PointsBet has set odds of 14/1 on Georgia, followed by Oklahoma at 20/1, Utah at 40/1 and Baylor at 100/1.

Wisconsin, meanwhile, enters the weekend as a  750/1 longshot at William Hill US. The Badgers are off the board at PointsBet.

Who do you think will win it all? pic.twitter.com/i0dAdc4PN5

No faith in Wisconsin in rematch with Ohio State

Three prominent books are pulling for an upset in the Big Ten Championship, where Ohio State is a heavy favorite over Wisconsin. Despite considerable juice on the Buckeyes (-770), more than 90 percent of handle at DraftKings Sportsbook is on Ohio State on the moneyline. FanDuel Sportsbook has also seen one-way action on the Buckeyes, with approximately 98 percent of the moneyline handle and 92 percent of the spread handle on Ohio State.

On the spread market, Ohio State has ticked up one point at FanDuel to a  -16.5 favorite over the Badgers. The Buckeyes are 15.5 point favorites at PointsBet, which has also seen significant one-way action on Ohio State. In the first meeting between the teams on Oct. 26, Ohio State defensive end Chase Young recorded four sacks as the Buckeyes cruised to a 38-7 victory.

“The first meeting between these teams is clearly fresh in bettors’ minds,” said Matt Chaprales, PointsBet USA’s head of content.

The public has backed Ohio State on over 85 percent of tickets and just under 80 percent of handle at the spread. The top-ranked Buckeyes have won all 12 of their contests this season by double-digits. Ohio State also leads the nation with an average margin of victory of 38.1 points per game.

Although Utah opened as 4.5-point favorites over Oregon in the Pac-12 Championship, a considerable amount of money has come in on the Utes ahead of Friday night’s matchup. Now favored by 6.5 points, Utah has the nation’s stingiest run defense. The Utes allow just 56.3 rushing yards per game and a measly 2.26 yards per carry.

A fair amount of money has also poured in on LSU, as the Tigers seek their first SEC title since 2011. The Tigers opened as four-point favorites over the No. 6 Bulldogs, but the line on the Vegas consensus has since spiked to seven. After reaching as high as 56.5 points, the total dropped to 54.5 on Dec. 5 before rebounding back to 55.5 as of 11 p.m. ET Dec. 5. In five of the last seven SEC Championships, the total has hit 55 points or above.

Georgia is also dealing with a litany of injuries ahead of Saturday’s crucial showdown. Already thin at receiver with Lawrence Cager out for the season (ankle), Georgia will be without George Pickens for the first half due to suspension. D’Andre Swift, the fourth-leading rusher in the SEC, also unexpectedly landed on the injury report this week with a shoulder ailment. While Macken noted that there has been a slight overreaction in the market to the injuries, he emphasized that about 80 percent of handle is on LSU (at minus-7).

LSU is led by quarterback Joe Burrow, the overwhelming favorite to win the Heisman Trophy. Burrow, a transfer from Ohio State, is also a slight favorite over Young to be the top pick in the 2020 NFL Draft.

At Fanduel, Oklahoma is a 7.5-point favorite over Baylor in the Big 12 Championship. Macken has seen an even 50-50 split on moneyline wagers in Saturday afternoon’s game at AT&T Stadium in Arlington, Texas. Following a 34-31 win over Baylor on Nov. 16, Oklahoma is a -320 favorite in the rematch. Despite boasting the league’s top scoring defense (18.4 points per game), Baylor is a +250 underdog on the moneyline.

When the Ducks and Utes meet in the Pac-12 Championship, forecasts call for winds north of 15 mph at kickoff. The forecasts prompted Macken to lower the total by more than five points to 45.5.

Macken recalls several contests at Santa Clara’s Levi’s Stadium, including the 2016 Pac-12 Championship, where windy conditions impacted the total. Washington also dealt with severe wind in that game, a 41-10 victory over Colorado. High winds in Santa Clara for both 49ers and top college games typically can move totals by several points, Macken indicated.

“To be honest, the 5.5 point move based on the forecast is warranted,” Macken said.