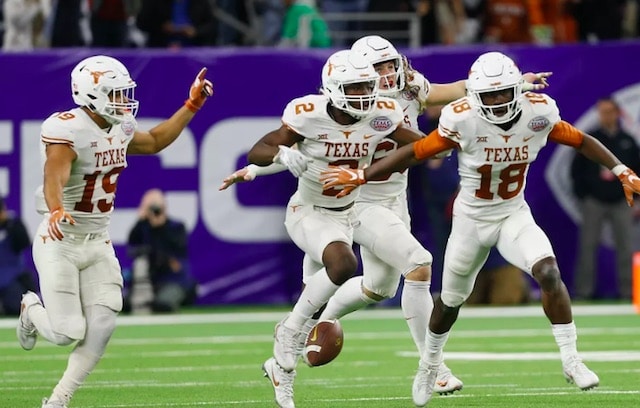 After an interminable wait since Alabama’s exciting 28-23 win over Clemson in the College Football Playoff National Championship, the 2018-19 college football season is just weeks away. With that, many sportsbooks have posted over/under win totals for all 129 FBS teams and I have attempted to identify some of my “best bets” in this article.

In making these types of plays, I historically try to both “buy low and sell high” depending on the public perception of teams and also pay close attention to marquee coaching changes at schools with large big fan bases. Shopping around for the best number is also key, as the lines are not as tight as a typical full slate of heavily bet games.

Note below that I have “shopped” for lines both at the Westgate SuperBook and the SouthPoint in order to recommend a play that best suits my projections.

While my allegiances lie with my alma mater, the University of Texas, I have not been high on the Longhorns since the disappointing end to the Mack Brown era and the disaster that was Charlie Strong. Speaking of Mack Brown, while Texas hasn’t won the nine games it will take to cover this total since Brown’s final season in 2012, most publications have the Longhorns ranked in the mid-teens in their preseason top 25 polls. I think the Longhorns are a sleeper to make the College Football Playoff this season.

Despite only posting a 7-6 record in 2017, the Longhorns defense was vastly improved and the team suffered an overtime loss to a heavily favored USC team in Los Angeles and had the ball in Oklahoma’s territory (as 14.5-point underdogs) with a chance to win in the final minutes in the Red River Showdown.

This season Texas will be double-digit favorites and should net four easy wins against Maryland (currently -11, while noting the loss as a double digit favorite to Maryland at home last season), Tulsa, Baylor and Kansas, plus they should be a touchdown favorite or better against and Kansas State (currently -7.5). The Horns should actually be favored in every game this season, the lone exception being against Oklahoma (currently +5 after opening at +12).

If Texas can beat USC (currently -4.5 after USC opened as the betting favorite) at home in Week 3, then the College Football Playoff hype machine will be in full effect for Longhorns’ annual tilt with Oklahoma in Dallas, with both teams potentially entering the game with 5-0 records. Even if Texas loses to both USC and OU (which I don’t think will happen), there is still a decent chance that it runs the table to secure 10 wins. 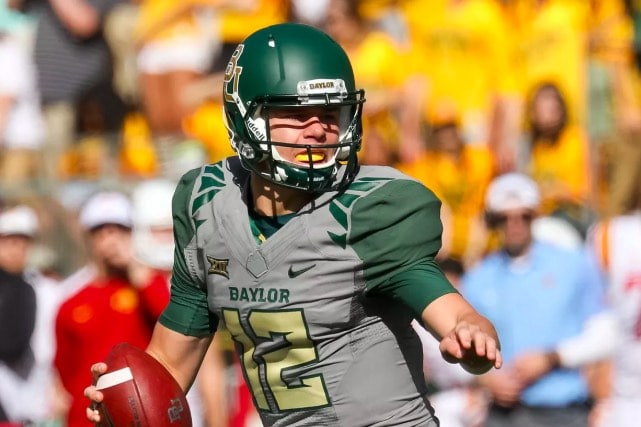 The Baylor Bears would like to forget a rocky 2017 both on and off the field. Following a tumultuous offseason rocked by the deplorable sexual assault scandal and ultimate firing of head coach Art Briles, the 2017 Bears mustered only a single win — over perennial Big 12 doormat Kansas — and suffered home losses to Liberty, the University of Texas and San Antonio (UTSA).

Charlie Brewer emerged as a legitimate candidate for quarterback of the future in Waco; however, this Baylor team is still very young and inexperienced at most positions and 2019 looks like the more likely year for any turnaround story. While Baylor could conceivably start the season 4-0 with wins over Abilene Christian (yes, this is a real school), UTSA, Duke and Kansas, it is equally conceivable that the Bears fail to win another game, much less the three additional wins that it would take to push the Bears over the six-win total. 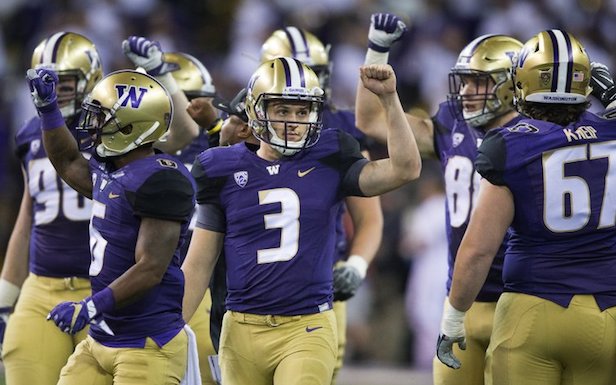 With Heisman candidate QB Jake Browning entering his senior season, and just one season removed from an appearance in the College Football Playoff, the oddsmakers have made Washington one of the betting favorites to reach this season’s College Football Playoff. It won’t take long to find out if Washington is a contender or a pretender this season, as the Huskies start the season against Auburn at Mercedes-Benz Stadium in Atlanta in a de facto home game for the Tigers. Washington is currently a 3-point underdog in this game and a loss would mean that the Huskies would need to run the table to eclipse the 10.5-win mark.

While Washington is fortunate to avoid USC for the second consecutive season, the Huskies always seem to lose a game or two that they shouldn’t, particularly on the road (see their 13-7 road loss as -17.5 favorites at Arizona State last year). The odds are good that Washington falters in at least one of its road games at Utah, UCLA, Oregon, California or Washington State.

Bonus note: If you like the Huskies to cover the total, the Westgate SuperBook is offering the Huskies total at 10 (o -145/u +125). In lieu of taking both sides and paying significant juice on both plays, a simple “hedge” opportunity to consider if you like the under is to take the Huskies +3 against Auburn or even on the money line at +140 and hope that they drop a couple more games down the road. 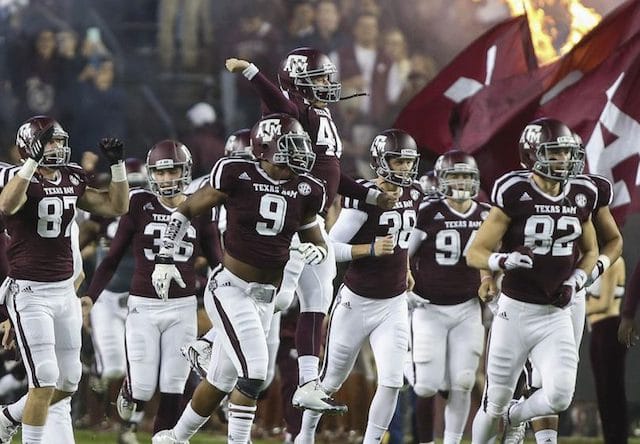 The arrival of Jimbo Fisher as head coach has not only caused hopes to skyrocket in College Station for the 2018 season, but has also secured the aggies* a token appearance at the tail end of many preseason Top 25 polls. While Texas A&M has talent on the offensive side of the ball, their defense allowed 35 points or more in half of its games last season (and another 55 to Wake Forest in the Belk Bowl) en route to a 7-6 overall record. It will take more than bringing in a big-name coach to correct these problems.

A&M is known for scheduling patsies and 2018 is no exception with “pay to lay down” wins already inked in the books against Northwestern State, Louisiana Monroe and UAB. Finding the next five wins needed to go over the win total will be a far greater challenge for Fisher’s squad. The aggies will be heavy underdogs underdog in at least five of their games, including at home against Clemson (currently +12.5) and in three road games Alabama (currently +24), Auburn (projected +7) and Mississippi State (currently +4).

Texas A&M projects to be a small favorite on the road at South Carolina (currently -2), at home against LSU (currently -1.5) and their annual meeting with Arkansas in Dallas always seems to come down to which team has the ball last. In sum, there are plenty of “almost guaranteed” losses and “quite possible” losses on what is a gruesome schedule for the 2018 aggies.

*Note: as a Longhorn graduate, I am ethically prohibited from capitalizing the word “Aggies.” 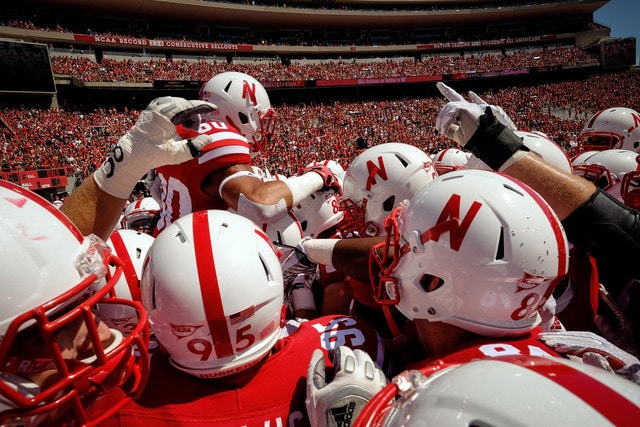 Similar to the changing of the guard at Texas A&M, Scott Frost (coming off a “National Championship season” at UCF) has the Nebraska faithful believing that the Huskers will rebound from their 4-7 campaign in 2017. Nebraska should have no problem with picking up non-conference wins over Akron and Troy, but will also play a very losable game at home in Week 2 against Colorado.

The play: Under (Best Bet)

Iowa State Cyclones (6.5, o -120/u EVEN at the Westgate SuperBook and SouthPoint)
Projected regular season record: 5-7
The play: Under

Barry McFadden is a co-founding partner of Greathouse Holloway McFadden PLLC in Houston, Texas and has significant experience representing clients in the gaming and sports betting industry.  In addition to his legal practice, Barry and a partner finished in 3rd place in the prestigious Westgate Las Vegas NFL SuperContest in 2015, besting nearly 1800 other entrants for a payday of $181,335. 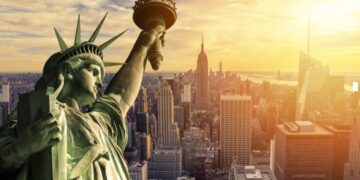