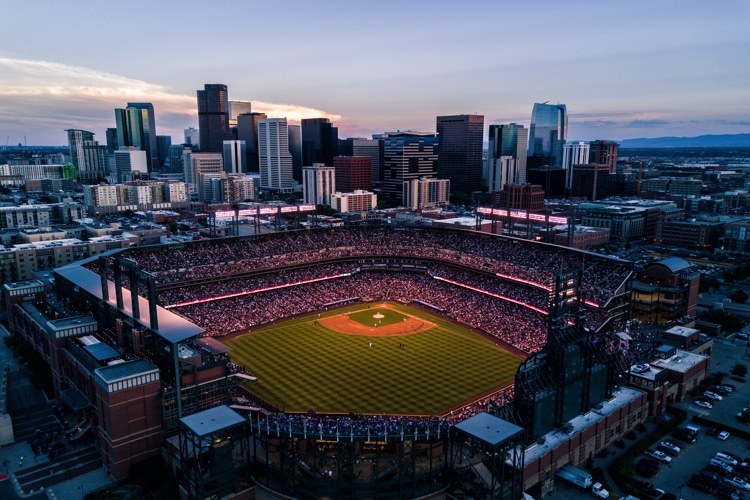 Colorado in August became the seventh state in the post-PASPA era to surpass $8 billion in sports wagering handle, as the state’s Division of Gaming on Wednesday reported more than $290.1 million in wagers were accepted during the month.

The Centennial State joined New Jersey, Nevada, Pennsylvania, Illinois, New York, and Indiana in that select group by edging to nearly $8.2 billion in handle since launching operations in May 2020. Colorado also became one of seven states to surpass $3 billion handle for the calendar year, though that group will grow notably in September.

Colorado operators had their best month outside the first two months of activity in terms of win rate, posting an 8.9% hold to claim $25.9 million in gross revenue. That contributed to an all-time monthly high of $22 million in adjusted revenue, marking the first time adjusted revenue was at least 75% of the gross revenue claimed and the second consecutive month it topped 70%.

That helped the state collect more than $1.8 million in taxes for August, the second-highest haul behind only the nearly $2 million that filled the coffers last November. One contributing factor to the higher adjusted revenue to gross revenue percentage may be tighter oversight. The Division of Gaming was dinged for notable tax discrepancies by an audit that spanned the first year of wagering in the state.

The state legislature voted to gradually eliminate operator tax write-offs, but that change does not take effect until Jan. 1.

August’s handle and revenue numbers were significantly higher compared to both July of this year and August 2021. Handle increased 12.3% compared to July and 36.9% versus August of last year. The biggest spike came in adjusted revenue compared to August 2021, when the state was eligible to tax just $7.1 million.

In addition to the 8.9% gross revenue hold ranking third all-time, the 7.6% adjusted hold easily cleared the previous benchmark of 5.7% from June 2020. Despite the lofty win rate by Colorado standards, it ranks ahead of only Louisiana (7.6%) and Nevada (3.9%) among the 24 states that thus far have reported figures for August. Illinois and Arizona have yet to report their numbers.

Colorado handle has surged 55.9% through the first eight months of the year compared to 2021, when handle was slightly more than $2 billion. The gross revenue win rate, however, is down nearly one full percentage point to 5.9%, which has put a drag on gross revenue to a degree. The $185.6 million in operator revenue is 35.2% higher compared to the same cumulative period last year, and adjusted revenue is up 27.6% to just shy of $86 million.

The state has collected $9.2 million in taxes for the 2022 calendar year, which is running almost $2 million ahead of last year’s pace. Colorado has generated $23.8 million in 28 months of sports wagering.

Baseball and parlays rule the roost in August

Even with the Colorado Rockies a flop in the NL West, baseball continued to be the primary source of action in the Centennial State. The $117.8 million handle it generated marked the fourth consecutive monthly record, though the public fared better in August than July, holding the house to a 5.5% hold and $6.5 million in revenue versus $7.3 million the previous month. Baseball handle is less than $7.9 million shy of reaching $1 billion all-time.

Parlay wagering ranked second in both handle and revenue at $52.7 million and $5.7 million, respectively. The 10.9% hold is somewhat low, though, considering the nationwide hold for August’s wagering is currently 10.6% for gross revenue. As a point of comparison, New Jersey reported a 21.3% hold on parlays from $137.9 million handle for August.

Pro football was third in revenue in Colorado with $4.1 million, but a good portion of that appears to be futures wagering, with the $21.5 million handle ranking third among all sports for August. Tennis squeezed into second with more than $29 million, with operators narrowly missing a 10% hold with $2.9 million in revenue.

Operators also set an all-time monthly high for soccer revenue at $1.8 million, creating a 9.5% hold from $19 million wagered. College football bets created $1.7 million in revenue, but again, that appeared to be coming more from futures wagers, as play did not begin until the final weekend of the month and handle totaled $4.3 million.