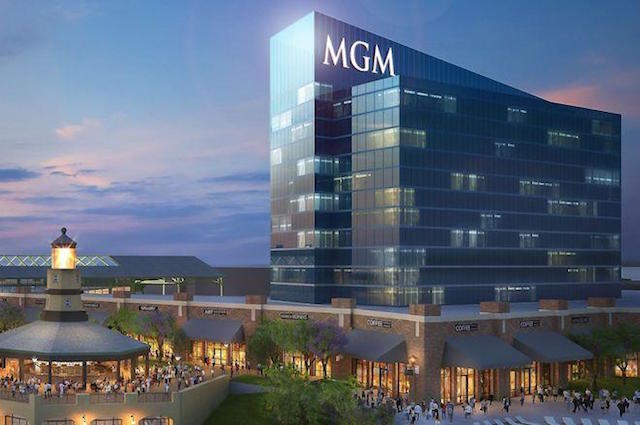 A rendering of an MGM Bridgeport property

Connecticut has always been on the forefront of gaming. Just four years after the Indian Gaming Regulatory Act passed in 1988, the Foxwoods Casino opened for business, drawing patrons in the Tri-state area. When it comes to legal sports betting, Connecticut is also looking to become one of the first movers.

The Connecticut State House passed House Bill 6948 last year to make it one of the first states to consider sports wagering as a new source of revenue. And this year, the state assembly’s Public Safety and Security Committee has legal sports betting on its docket on a to-be-determined date this month.

Committee Chairman Joe Verrengia (D-West Hartford) wrote recently, “I will be working closely with my colleagues this session to study all aspects of expansion, including the budgetary, regulatory, and social impact, in order to make the most informed decisions possible should Connecticut decide to adopt related measures.”

MGM is Angling to Build Commercial Casino in Connecticut, Presumably to Establish a Sports Betting Foothold in a State

Recently Representative Chris Rosario (D-Bridgeport) sponsored a bill calling for the withdrawal of plans to license an Indian casino in East Windsor to open competitive bidding for construction of  a casino in the coastal town of Bridgeport, near the New York state border.

Bridgeport is a two-hour drive from New York City and there is ample rail service between the two.

MGM Resorts International, a Nevada-based gaming giant, has proposed a casino in Bridgeport and is seeking the chance to become the first non-tribally owned gaming corporation to do business in Connecticut. The bill would require bids by Jan. 1, 2019 and the recommendation of a winner by April 2, 2019.

MGM’s interest in putting down roots in Connecticut may mean that it’s betting on the Supreme Court overturning the Professional and Amatuer Sports Protection Act (PASPA), the 1992 federal law effectively banning sports betting outside Nevada. A property in Connecticut would give it an even stronger foothold in the northeast with the MGM Springfield (Massachusetts) set to open in October. Massachusetts legislators have also recently expressed interest in sports betting.

Connecticut wants to move pretty quickly. In fact, legislators were talking about legalized sports gambling long before the current assembly convened on Feb. 7.

“I would like [a sports betting bill] to be one of the first bills voted out of committee and I would like for the General Assembly to act on it quickly after that,” House Speaker Joe Aresimowicz (D-Berlin) told the Connecticut Post in January. “It’s another area where if we don’t act, I’m sure neighboring states and other areas will.”

Complicating matters is that some Connecticut lawmakers are opening the door for a commercial casino on state, not tribal land, according to the Courant. This has drawn vehement opposition from some state lawmakers as a possible violation of tribal-state agreements, and could jeopardize revenue sharing agreements with tribal casinos.

We will update when the date of the Public Safety and Security Committee schedules its forum.