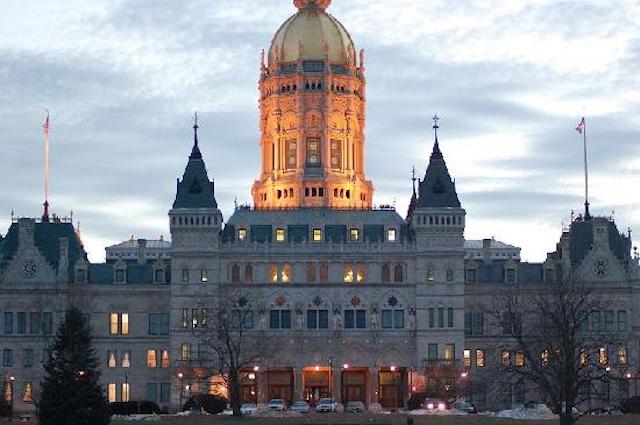 The Connecticut Capitol Building at Sunset

Two weeks ago, Connecticut’s Public Safety and Security Committee brought together a varied group of stakeholders to discuss the possibility of Connecticut sports betting in a fairly long and at times lively session. Connecticut officials heard the discussion and now after a public hearing on March 15, it’s clear that influential parties favor legal sports wagering in Connecticut.

This hearing also brought a representative from a powerful Tribal casino, who issued a cutting rebuke of Major League Baseball and the NBA’s testimonies at the March 1 hearing. That written testimony, first reported by Steve Ruddock of Online Poker Report, came from Seth Young, Executive Director of Online Gaming at Foxwoods Resort Casino. Young expressed Foxwoods’ wholehearted support for online gaming (such as in New Jersey), for legal sports betting, and for regulated online gambling in general.

But Young’s and Foxwood’s remarks about Major League Baseball and the NBA’s lobbying efforts at the earlier hearing was the most eye-opening section of the statement — a thorough dismantling of the leagues’ disingenuous (at best) positions on how states should handle sports betting regulation.

Two other important parties — the Connecticut State Lottery’s Steve Wagner (“Lottery”) and Connecticut Attorney General George Jepsen office (“AG”) — also submitted written testimony. The Lottery focused on the potential implementation of Connecticut sports betting while the AG devoted his attention to a complication involving the Tribal casinos and their ability to operate online gaming and sports betting — in accordance with their existing compacts with the state. Below we’ll break down the testimonies individually with major top-line takeaways — focusing on sports betting – with analysis and some important quotes.

Young and Foxwoods (of the Mashantucket Pequot Tribal Nation) honed in on three main areas:

Note: the Joint Committee on Public Safety and Security called this hearing to discuss a number of issues; the sports betting bill under review specifically is House Bill 5307, which would “require the Commissioner of Consumer Protection to adopt regulations to regulate sports wagering when federal law is enacted or repealed or a federal court decision is issued that affirms the authority of a state to regulate sports wagering.” All eyes on Murphy v NCAA, aka the Supreme Court sports betting case, with a decision forthcoming before late June on the fate of the federal law banning sports betting outside Nevada, PASPA.)

(1) Let’s begin with the harsh words on the sports leagues’ lobbying efforts. It’s a powerful, convincing and entertaining read. And as we’ve watched the leagues’ expansive lobbying efforts unfold across a dozen-plus states discussing legal sports betting, this is probably the most thorough, cohesive takedown of the self-serving nonsense the leagues are pitching.

Not only that, but if Massachusetts, New York (considering giving the leagues a small “integrity fee” as well as data control), Rhode Island and other neighbors are paying attention, the direction Connecticut decides to go could have a real impact on other states’ lawmakers’ thinking.

Here are the three body blows:

Now cut back to this March 1 exchange about the so-called 1% off-the-top “integrity fee” the leagues want (click on here for a graphic showing what that does) from all sports wagers in every state:

Asked Representative Kurt Vail (D-Somers and Strafford) of MLB representative and counsel Bryan Seeley: “Would you still be in favor of [legal sports gambling in Connecticut] if we eliminated that 1% fee?

“No,” said Seeley, without hesitation.

(2) Certainly the number one issue in their view, Young and Foxwoods are also concerned as to whether the Tribes’ compacts with the state would permit sports wagering, which might necessitate new legislation or amendment of some kind to put them on equal footing with commercial properties and the Lottery.

(3) Revenue estimates: “We estimate that the entire sports gambling market opportunity in Connecticut is worth between $75M to $105M per year, split between all operators, before any operating costs or taxes are contemplated.”

Continued: “With iGaming and sports gambling operated together by the Tribes, we project Connecticut will collect tax revenues of $20.8M in Year One, escalating to $29M in Year Five, for a total of $127.7M in projected new tax revenues over five years.”

Let’s cut to the most revealing portion of the remarks, pointing to what operations in Connecticut might look like, depending which was PASPA goes:

The Delaware Lottery operates sports betting for that state. Interestingly, we share the gaming system vendor – Scientific Games – that operates the retailer terminals that sell lottery games and sports betting. Delaware only sells NFL parlay wagers through the retailer terminals. Of their approximately 600 retailers, only 108 locations sold sports wagers, and the gross sales of those few retailers was about $28 million last year over the course of 20 weeks. That is a huge number, and is only from the sale of a single sport for a portion of the year in a very small state

If the federal prohibition is overturned, and if sports betting is approved in Connecticut, a model similar to the Delaware model could be implemented fairly quickly by the Connecticut Lottery, but we would also like to leverage technology. The sports betting world is fluid, point spreads and odds can change frequently, and the sheer number of games for some sports makes it very difficult to get the most current data to the players. To truly implement sports betting in the best possible way would require the ability to place bets via the internet and mobile devices. This would allow the Lottery to update lines in real time, and give each customer the ability to view all games and options at their leisure.

That’s a lot of potential for a lot of revenue to spread around amongst these retailers, like highway gas stations for example. Operator William Hill manages Delaware’s systems for their retail locations. (More on Delaware’s positioning here.)

Office of the Attorney General:

First the AG urges the lawmakers to proceed carefully on sports wagering. It appears they are. And then the thrust of the testimony: 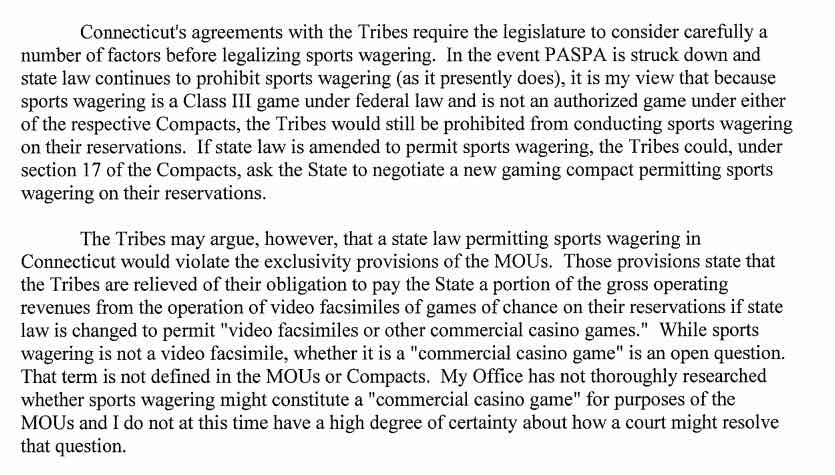 Connecticut makes a lot of money in their revenue sharing agreements with Foxwoods Casino and Mohegan Sun in Uncasville. They don’t want to lose that or upset the relationship. I would expect that the committee will keep their interests top of mind as the bill advances along. We’ll be keeping an eye on it, so stay tuned.