Connecticut Bill Gets Out of Committee, But Tribes at Odds With State 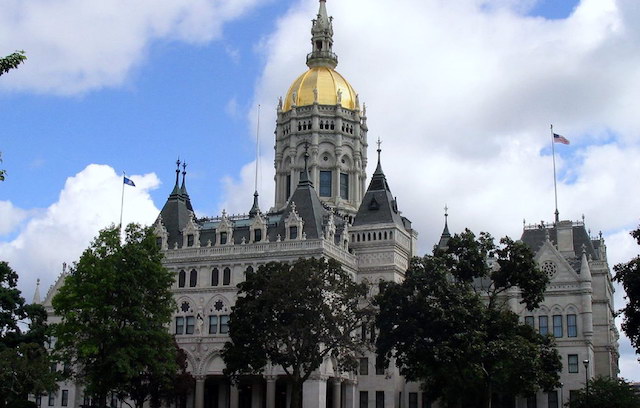 The Connecticut State Capitol in Hartford

Connecticut’s House Judiciary Committee voted 28-5 on Monday to pass HB 5307, one of multiple sports betting bills floating around the state legislature. Because the committee passed the bill, it can now move onto the House floor for a full vote. The bill was approved by the Public Safety and Security Committee earlier in the session.

While Monday’s action means that sports betting in Connecticut inches closer – if the Supreme Court indeed overturns the Professional and Amateur Sports Protection Act – there are still hurdles to overcome. In particular, the state’s two tribes, which run the Mohegan Sun and Foxwoods casinos, believe they would have exclusivity when it comes to offering sports betting, should it become legal. Key state lawmakers and the attorney general, according to The Day, aren’t so sure.

“The attorney general and many of us here don’t exactly agree with that,” House Speaker Joe Aresimowicz (D-Berlin) said in a press briefing on Monday.

Though Connecticut Sports Betting Wasn’t on the Table When Gambling Was Legalized in State, Connecticut Tribal Powers Are Claiming Exclusivity.

House Majority Leader Matthew Ritter (D-Hartford) echoed his counterpart, saying that sports betting didn’t fall under the original compacts the tribes have with the state, in part because sports betting wasn’t on the table at that time.

“It was never contemplated, the specific words were never used, and here we are 26 years later and they’re raising it for the first time,” Ritter said at the briefing. “I’ve heard better legal arguments than that one.”

The timing of the Judiciary Committee’s approval of HB 5307 is a bit curious, as both tribes sent letters to legislative leaders late last week outlining their objections. In fact, the Mohegan tribe threatened to stop paying the state the current 25 percent cut of slot machine revenue, should lawmakers legalize sports betting without striking a deal with the tribes.

“If the state authorizes video facsimile gaming, the exclusivity provisions of (the compacts) would be violated and our obligations to make the slot contributions cease,” Mohegan attorney general Helga Woods told the CT Post.

It’s Likely Connecticut and Its Tribes Will Have to Come to an Agreement About Sports Betting Revenue.

The letters are likely just an opening volley from the tribes to get the state to the negotiating table. In 2015, the two struck a deal when the state began offering Keno throughout Connecticut and not just at the two casinos.

Connecticut is among a dozen states that appear to be trying to get ahead of the Supreme Court, which is set to rule on Murphy v NCAA before the term ends in late June. Should the court side with the state of New Jersey and overturn PASPA, the federal level ban would be lifted, leaving individual states to decide, or not, to pass laws to make sports wagering legal.

Connecticut’s senate has its own sports betting bill, SB 540, which got a favorable report from the Finance, Bonding and Revenue Committee in April. Since the committee voted, SB 540 has been subject to a financial review and assigned a calendar number, but not a calendar date.