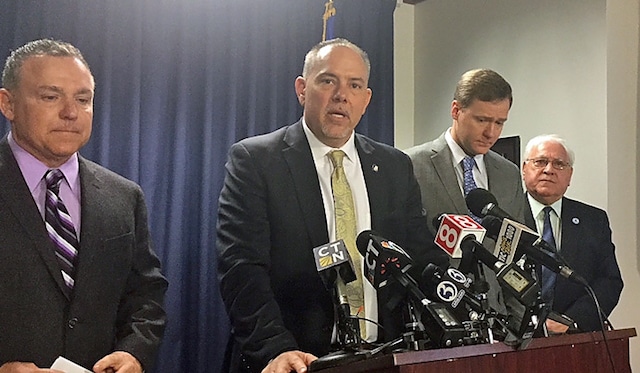 So far, there’s been a lot of talk but little action when it comes to the idea of legal sports wagering in Connecticut. On Wednesday, the conversation on the possibility of Connecticut sports betting continued when three House representatives, including Speaker Joe Aresimowicz (D-Berlin), held a press conference on the matter.

The main thrust of the debate is this: state legislators believe that Connecticut should capitalize on existing infrastructure (tribal casinos and off-track betting sites) and have the framework in place to make sports wagering in Connecticut legal ahead of the Supreme Court decision on Murphy v. NCAA, in which New Jersey seeks to overturn the Professional and Amateur Sports Protection Act. If the high court strikes PASPA entirely, that would allow states across the U.S. to license and regulate sports betting in their borders (or not). A decision in the matter may come as early as Monday.

Connecticut will take one more step toward drafting legislation, when the House Public Safety and Security Committee hosts a forum Thursday morning on the “Present and Future Trends of Gaming.” The NBA and Major League Baseball, which have been lobbying across the U.S. for an “integrity fee” on all sportsbook receipts, will be represented at the forum, as well as officials from the daily fantasy company DraftKings and the multi-national sportsbook William Hill.

Joe Verrengia (D-West Hartford) is co-chair of the committee and was among those at Wednesday’s press conference, and he believes Thursday’s forum will help legislators better understand how to proceed. The forum will be followed next week by a broader informational meeting.

“I think it’s important that Connecticut is poised to compete in the marketplace should sports betting become legalized,” he said. “The informational hearing …  is intended to assist legislators in their decision-making process.”

Connecticut is likely trying stay in lockstep with – if not get ahead of – neighbors New York and New Jersey, both of which have been more high-profile in the legal sports betting game. New Jersey, of course, is the birthplace of Murphy v. NCAA, while the New York legislature is currently entertaining bills in both the House and the Senate with more legislation and pathways to come. Both states are also more populous, but Connecticut has the advantage of being able to draw gaming customers from border states that include both New York and Massachusetts.

There’s easy access from both Boston and New York to Connecticut’s two Indian-owned casinos, and both are well-established. It is less than 90 minutes from Boston to the Foxwoods Casino complex and less than two-and-a-half hours from New York City to both Foxwoods and Mohegan Sun. But like New York, Connecticut has the complication of negotiating the interests of tribal-owned casinos, commercial casinos and more.

Per the Connecticut Post, Rep. Vincent Candelora (R-Durham) said he wouldn’t “dismiss” legalized sports betting in Connecticut, but “gaming agreements between the state and the Mashantucket Pequot and Mohegan tribes, who own Foxwoods Resort Casino and Mohegan Sun respectively, could be additional hurdles,” writes the Post.

Connecticut took its very first step in legalizing sports wagering in Connecticut nearly a year ago, when it passed HB 6948, which calls for an “advisory council on large entertainment venues, the regulation of sports wagering and the number of off-track betting facilities.”

Essentially, the bill calls for the state to develop regulatory framework for sports betting, though it’s unclear if such framework has been written, or at least lawmakers recognize they need to do more.

Wednesday’s press conference was another play by Connecticut democrats to put pressure on the state assembly to legalize sports betting, which lawmakers say could put $40-$80 million in tax revenue into state coffers. Legislators want to be ready to turn on the tap.

“Connecticut should be ready to act as soon as the Supreme Court decision is handed down,” said House Majority Leader Matt Ritter (D-Hartford). “Based on the oral arguments before the court late last year, it seems entirely possible that the federal ban on sports betting will be overturned, and we want to be competitive with other states.”