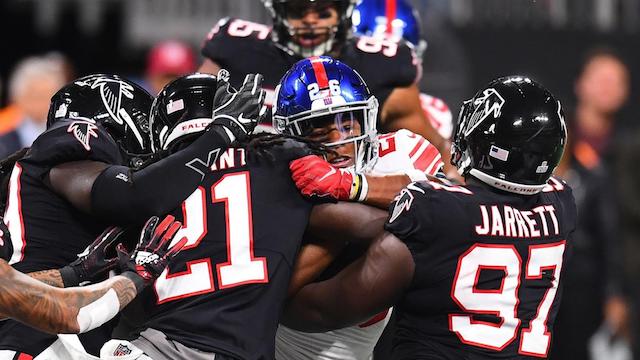 The New York Giants delivered more agita on Monday night for scores of Giants fans but in the end, with five ticks remaining, Big Blue came through for the bettors on a late Eli Manning touchdown strike to Odell Beckham Jr. from short range.

The TD narrowed the score 23-18 in the Falcons’ favor, which actually sealed the cover in the Westgate Las Vegas SuperContest, in which the spread locked at 5.5.  For spread bettors outside the SuperContest, the Giants’ successful two-point conversion resulting in a 23-20 final would have given most/all Giants backers at cover as the line floated and closed around 3.5 or 4 at most shops.

Everything else being equal on the time-space-football continuum, Giants head coach Pat Shurmur’s earlier analytics-driven decision to go for a two-point conversion (which failed) when the Giants trailed 20-12, did not ultimately impact the SuperContest spread. But it certainly made the final Saquon Barkley two-point rushing plunge a spread-tastic conclusion to MNF game between two teams going nowhere.

Overall, four of the top five consensus SuperContest picks (figures via FantasySuperContest) were favorites who covered the number — the Vikings, Patriots, Chiefs and Lions. Here’s a snapshot of Week 7 and then we’ll get into some specifics.

SHOCKER OF THE DAY

Baltimore scored what they believed was the tying TD near the end of regulation but Justin Tucker missed the FIRST XP OF HIS CAREER and the Saints hold on to win 😱😱😱 pic.twitter.com/lSn0RKiUy8

The affinity for favorites this past week extended down to the ninth pick when finally an underdog appears — the Saints +2.5 at Baltimore.

Proving that nothing and nobody except Sofia Vergara is perfect, Ravens kicker Justin Tucker missed the first extra point of  his career (he was 222-for-222 previously), giving the Saints a 24-23 road win at Baltimore, preventing an overtime decision and possible Ravens cover.

At MetLife Stadium, there’s not a lot of Jets believers as a banged up Gang Green defense let the dams break in the second half, allowing 27 2H points for an easy Vikings cover.

In Chicago, the Patriots went off as a 1- or 1.5-point favorites depending on where you play, meanwhile the line locked in the SuperContest at 3. So, theoretically better to be on the Bears on the static line. Theoretically, because it doesn’t pay long-term to bet against the Brady-Belichick Patriots.

It looked good for Da Bears until Patriots return specialist Cordarrelle Patterson did his thing and sliced through the Bears’ coverage unit for a 95-yard score. And then again, tied at 24 midway through the third quarter, it looked like sharps on Chicago might be right, until Dont’a Hightower bulldozed Bears reserve tight end Ben Braunecker en route to blocking a punt that Patriots teammate Kyle Van Noy returned for a touchdown. Allowing two defensive or special teams scores allowed is pretty much a death knell.  The Pats rolled 38-31.

And then there’s Kansas City, which lit up the Bengals 45-10 on Sunday night (the total managed to stay under either 56 or 57!), streaking to a perfect 7-0 against the spread. They’re now a 10-point favorite over the visiting Denver Broncos on Sunday.

Rounding out the top five consensus picks was Detroit, which covered wire-to-wire against Miami and played solid run defense and relatively mistake-free football. As Ryan Tannehill recovers from a shoulder injury, Fins backup QB Brock Osweiler will get another start on Thursday against Houston, meaning one more opportunity to pick against the Brock Lobster — so far a 1-1 proposition.

Contestant JAZ maintains in the top spot after a 4-1 week, the only blemish being Baltimore. Get your picks in and giddy’up, somehow it’s already Week 8.