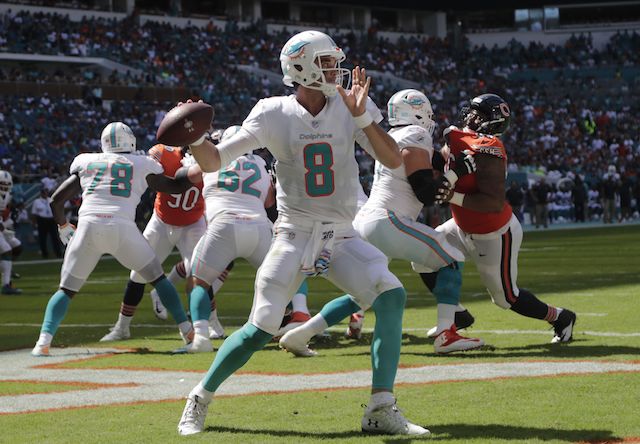 To round out NFL Week 6, the Green Bay Packers (-9.5) gave little hint of a cover on Monday night against the visiting San Francisco 49ers in another vintage Aaron Rodgers performance in which the QB brought the Pack back from 30-23 for a 33-30 win as time expired.

Together with the Chiefs-Patriots Arena Football League-themed game on Sunday night, teams in the two primetime games combined for 146 points scored. But back to the point spreads that decide fates in the 3,120 player field competing for a $1.5 million top prize in the Westgate Las Vegas SuperContest: It was not a pretty picture for the most popular teams this week, which went 1-4 overall, the lone cover coming courtesy Pittsburgh at Cincinnati.

Contestants collected a respectable 2.4 with two points apiece, a step up from Week 5’s 2.24, but let’s dig into what went wrong for top consensus picks New England, Jacksonville, Chicago and Indianapolis (figures via FantasySuperContest). Here’s the weekly snapshot, then we’ll dig into the consensus picks and a bit more below:

.@AB84 DID IT TO THEM 😳 pic.twitter.com/HJXM8zvsCy

Here you see the full top five consensus pick breakdown. Interestingly all of the lines in these games were 3 or one half point plus or minus:

Late in the fourth quarter between Steelers and Bengals, Steelers backers were able to exhale a bit thanks to the 20-14 lead, however the Bengals erased that with 1:18 remaining — Steelers still covering at 21-20, with the ball  going back into Big Ben’s hands. As ever, the possibility lingered of a soul-crushing pick-6 finale to squash the cover.

But Roethlisberger and Antonio Brown delivered on a 31-yard touchdown strike where AB took a dumpoff and slingshot through the Bengals defense (play shown above).

As for the Patriots… wow, hope you don’t like defense. There was one punt total in this game, 946 yards of total offense and 27 points scored in the fourth quarter alone. Although it looked like the Patriots were cruising toward a comfortable win at halftime up 24-9, Tyreek Hill found a bit of open space and pressed the Nitro button during three second half touchdowns. Here’s the 75-yard touchdown that made it 40-40:

Expect 12 more touchdowns in the last 3 minutes of this @Chiefs vs. @Patriots game 😦 pic.twitter.com/rOBGhzbzJF

With the ease of scoring, there remained the possibility that New England would still cover with a late touchdown after KC tied… but once the Patriots got into field goal range after a long Rob Gronkowski reception to KC’s 9, the cover was cooked. Other teams might have screwed up mismanaged the clock but the Patriots were playing to keep the Chiefs offense of the field and it worked. Final 43-40, Pats backers hung by the hook.

I don’t quite have words for what happened to Jacksonville in Dallas. Going to be some soul-searching going on in the Jaguars’ building this week after they share extra helpings of humble pie. Remember in January when Blake Bortles transformed into an asset, not a liability? Those days are over. Again. Also, the Cowboys defense is pretty good. Govern yourselves accordingly.

And then Chicago! My, oh, my. Dolphins backup QB Brock “Lobster” Osweiler got the start after learning Sunday morning he’d be starting for the injured Ryan Tannehill.  Vic Fangio’s ascending defense didn’t get off the airplane in the 31-28 overtime loss, allowing Frank Gore and Kenyan Drake to combine for 28 rushes and 158 yards (5.6 average) and some key chunk plays to receiver Albert Wilson.

The most humiliating part of this non-cover is that Chicago closed a 7-point favorite at most books after Tannehill (shoulder) was ruled out, while the SuperContest line remained static at -3, obviously. And the SuperContest entry deadline arrived on Saturday before Tannehill’s status was finalized. So, sweet salvation for those Miami backers (15th most popular pick) who found themselves on the short end of that line shift, but came out ahead.

Finally, the Colts suffered death by a thousand (or, 7) field goals at New York as Jets kicker Jason Myers nailed 7 of 7 from everywhere, while Jets punter Lachlan Edwards largely had a day off (one boot). Indy made a couple late runs in the 42-34 scoring fiesta but fell short as the road ‘dog.

New SuperContest leader is… JAZ, following a 5-0 performance (WAS, PIT, ATL, SEA, DEN), inching ahead 0.5 on second place KAPITAL GAINS who fell back after a 3-2 showing.