Team owner also owns Sahara casino, and platform will be first foray outside of Nevada 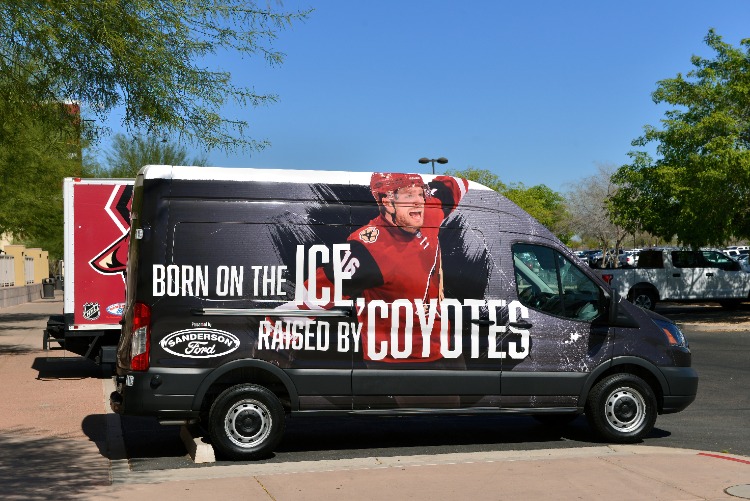 The Arizona Coyotes on Wednesday announced they’ll launch a digital sports betting app, and the operator should come as no surprise. The team is owned by Alex Meruelo, who also owns the Sahara Las Vegas casino and the Grand Sierra Resort in Reno. The venture will be the company’s first in sports betting outside of Nevada.

According to a press release from the Coyotes, SaharaBets.com will go live on Jan. 12, well ahead of the Super Bowl and the NCAA’s March Madness. Future customers can sign up for more info about the platform, which currently states: “YOUR NEW FAVORITE WAY TO BET ON SPORTS. Launching soon. Subscribe and receive the latest updates.” The platform appears to be the first for the company, which previously used William Hill (now Caesars) to run its Las Vegas sports betting location and online/mobile platform.

The Coyotes will be the second-to-last last major professional sports team in Arizona to launch a digital platform. On the opening day of the 2021 NFL season, FanDuel launched a digital platform and opened a retail sportsbook in partnership with the Phoenix Suns, Caesars went live via a deal with the Arizona Diamondbacks, BetMGM launched in partnership with the Phoenix Cardinals, DraftKings went live through the PGA Tour, and Barstool Sportsbook launched through its deal with NASCAR. Since then, BetRivers went live through the Arizona Rattlers, and at least five other platforms are available through tribal partnerships. BallyBet, which is partnered with the WNBA Phoenix Mercury, has yet to launch.

“The Coyotes are dedicated to providing innovative and entertaining experiences for our great fans,” said Coyotes President and CEO Xavier A. Gutierrez. “Our partnership with SaharaBets will offer next-level gaming experiences for fans who want to unleash their competitive spirit.”

A exciting day in the sportsbetting space. I'm happy to be part of the team to launch @SaharaBets_ in AZ with @ArizonaCoyotes

Myself & the whole SHB team look forward to bringing a unique sportsbooks to compete in the new Arizona market. Looking forward to launch next week! https://t.co/57QWoJX5Zs

Where Coyotes will play remains uncertain

The Coyotes were among 18 sports franchises/venues to get licenses from the Arizona Department of Gaming (ADG) in August, but it was unclear at the time where the team would play its games in the future — or if it would even remain in Arizona. The team currently plays at Gila River Arena through an agreement with the city of Glendale.

Meruelo, however, owed Glendale and the state $1.3 million in unpaid taxes last fall. The city wanted its money and threatened to lock the team out if the taxes weren’t paid. According to The New York Times, Meruelo paid the bill in full after the Arizona Department of Revenue put a lien on the team’s parent company.

The team’s arena lease ends on June 30, 2022, and won’t be renewed. It’s unclear where the Coyotes will play in 2022-23, but NHL Commissioner Gary Bettman has indicated the team won’t relocate. The Times also reported that a deal to build an arena and entertainment center in Tempe is in the works. The Coyotes are the least profitable team in the league.

The announcement that a wagering app is coming would seem to be an indication that the team will be staying in Arizona. The license isn’t valid in any other state, and the ADG already has two unused licenses for professional sports franchises/venues. Lawmakers earmarked 10 licenses each for pro teams and tribes, but so far, there are only eight pro franchises that meet the criteria, leaving two licenses unused. The ADG doesn’t have the power to shift those to tribes, even though more of those want licenses than there are licenses available.