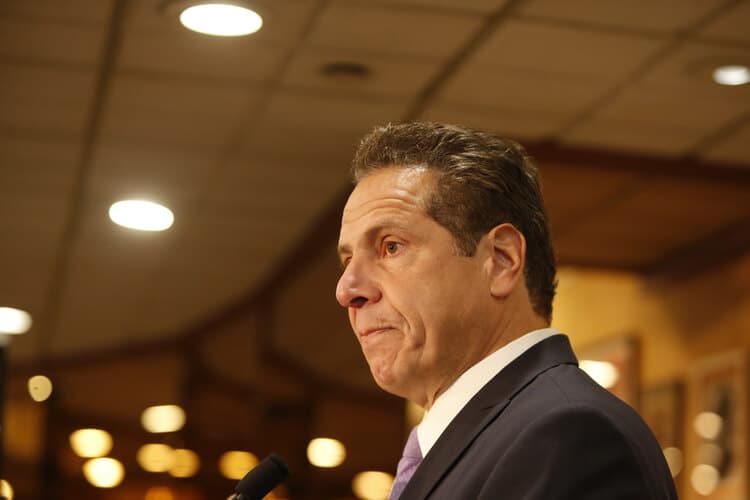 As expected, Cuomo did not mention mobile sports betting during an hour-long address Tuesday at the Kitty Carlisle Hart Theater at the Egg in Albany. It marked the second consecutive year that Cuomo, a three-term governor, has left mobile sports wagering out of the state budget since the Supreme Court struck down a federal ban on sports gambling in May 2018.

For the moment, four upstate casinos are the only licensed properties statewide that are allowed to accept sports wagering at their respective brick-and-mortar facilities. The four licensed sportsbooks – a FanDuel powered sportsbook at Tioga Downs, a sportsbook powered by DraftKings at del Lago Resort and Casino in Waterloo, a sportsbook powered by International Game Technology and Betgenius at Resorts World Catskills and a retail sportsbook by Rush Street at Rivers Casino & Resort Schenectady – generated less than $7.0 million in sports betting revenue in 2019.

Without making reference to mobile betting specifically, Cuomo noted that the state is not including any new casino revenues in the FY 2021 budget.

“This is not the time to come up with creative, although irresponsible revenue sources to solve a problem which doesn’t really exist,” Cuomo said in the address.

Cuomo is facing a budget deficit in excess of $6 billion, his largest for any single year since taking office in 2011.

With the passage of the upstate New York Gaming Economic Development Act in 2013, political leaders in New York set the stage for the eventual launch of sports betting at the four aforementioned casinos. At the time, the casinos were not allowed to accept sports wagers due to the federal ban. Cuomo now seeks to expand sports betting beyond the designated sports lounges, but stopped short of allowing mobile sports betting outside the casino walls.

Current law requires that wagering on sports be exclusively operated in a casino’s designated sports wagering lounge. The Budget ends this restriction by allowing for sports wagering outside the lounge, but still within the casino, per Gaming Commission regulations. — New York FY 2021 Executive Budget

The slight changes will likely do little to appease Sen. Joseph Addabbo, Jr., chairman of the Senate’s Racing, Gaming and Wagering Committee. Addabbo, a Democrat from the 15th district in Queens, has led the charge to bring mobile sports betting to the Empire State in recent months. Addabbo, in particular, has grown frustrated with the lack of progress regarding mobile sports wagering legislation in New York, as the activity has proliferated throughout New Jersey.

“I am hopeful that mobile sports betting is on a similar road as some other issues, such as Paid Family Leave and Medical Marijuana, which were initially rejected by the governor. Fortunately, these initiatives are now in place to benefit the people of our state — as would mobile sports betting,” Addabbo wrote in a Jan. 21 statement. “I look forward to working with the governor’s administration, the state legislative leadership, and my colleagues on this matter during budget negotiations.”

Update on the @NYSGamingComm's selection of the @SpectrumGamingG to conduct NYS' highly sought mobile sports betting study. The study is tentatively expected to be released on April 1, the same day the NYS budget is due. https://t.co/0iTAo44gbq

New York’s state budget is due on April 1, the same day an RFP draft report of a New York mobile betting study is scheduled to be submitted to the New York State Gaming Commission. The final report of the study, which is being conducted by Spectrum Gaming Group, is set to be submitted by June 1.