Interface changes will be applied to the web browser, mobile apps, and retail kiosks 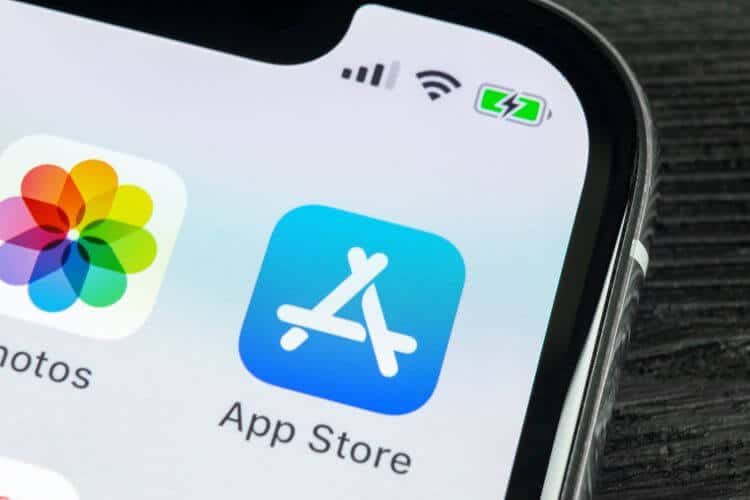 Two weeks ago, my inner golf nerd was in full force. With the PGA Championship soon arriving, I watched YouTube videos, read articles, and perused tweets trying to learn as much as possible about the host golf course and potential contenders.

Some of the research was to satisfy my golf fandom and some was intended to fulfill the hope of cashing a few bets and putting together a competitive golf DFS showing (rare for me in recent months). As an exercise for work, I decided to once again give GambetDC a shot as my sports betting platform of choice, as I live just minutes from Washington, D.C. I wanted to compare the betting process to that of DraftKings with its mobile sportsbook available in Virginia, a state I previously lived in for two years.

Using GambetDC — a D.C. Lottery-run sports betting app developed by Intralot — didn’t completely squash my excitement for the golf tournament, but it clearly illustrated why some customers complain about the District’s sports wagering platform. The D.C. Lottery has promised upcoming changes to fix those issues.

“We have a two-click type response that we’re trying to do,” said Nicole Jordan, the D.C. Lottery’s director of communications. “You should only have to do two clicks to do anything you want to do, and right now we know that that is not the case.”

I wanted to place a handful of bets on the PGA Championship, including top-20, top-10, and winner bets. Using GambetDC on my iPhone, that became quite an adventure.

To bet on a golfer to finish in the top 5 of the PGA Championship, I first navigated to the “golf” section of the platform. Oddly, the first screen shown on my iOS app was for the “parlay of the day,” which featured NHL matchups that day and had absolutely nothing to do with golf. 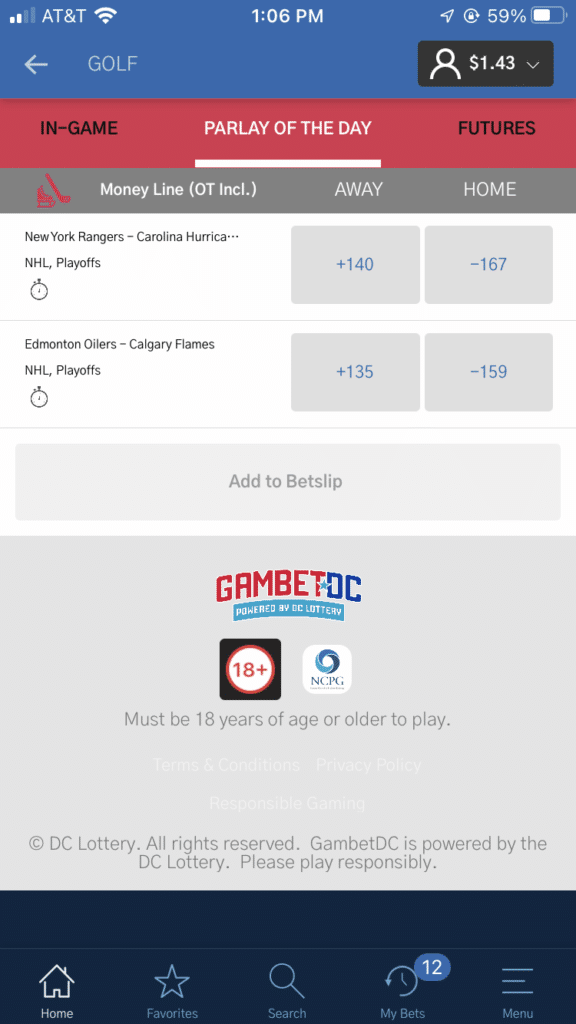 From there, I needed to click on the “futures” tab. Another click to “men” gave me a range of tournaments at the men’s professional level to select. I clicked “USPGA Championship 2022,” which surprisingly wasn’t first on the drop-down list of tournaments. For some reason, betting on the 2023 Masters and an upcoming Korn Ferry Tour event were among options listed above the upcoming major championship. 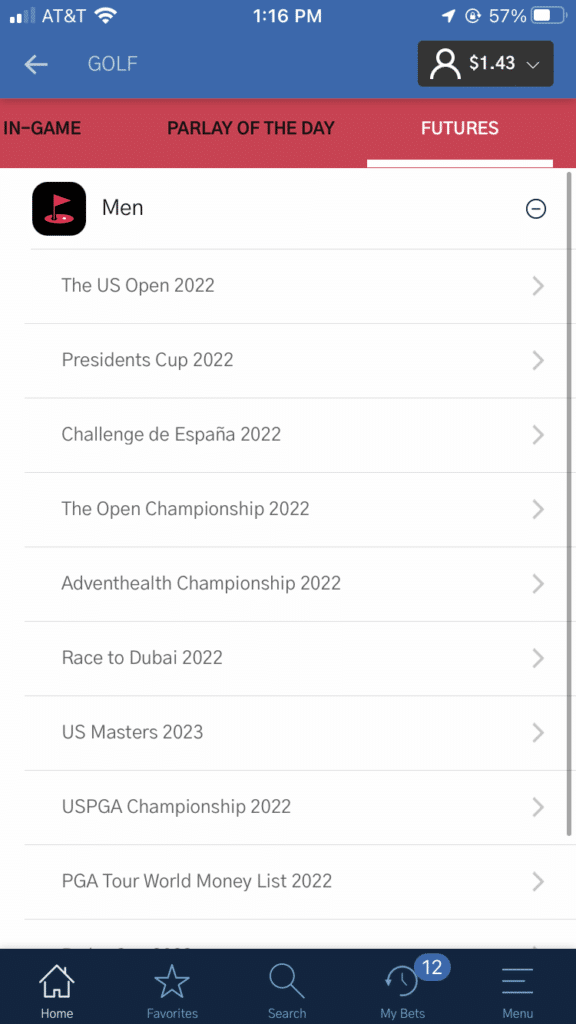 “If you’re used to DraftKings or FanDuel in other states, using this app is like going back in time and using MS-DOS,” one App Store review said of GambetDC. “Nothing intuitive about it. Must have been designed by middle schoolers as part of a school project.”

Complaining about a 15-second wait to make a small golf wager may cue the world’s smallest violin to play, but the GambetDC interface is an inconvenience. When it comes to recreation and entertainment, I’m not a big fan of inconvenience, and I’m guessing many others aren’t either.

To wager on professional golf on GambetDC certainly takes more than two clicks and includes a whole bunch of mindless scrolling. That’s what the upcoming interface changes are supposed to address.

“We’ve created this app, and we’ve listened to our customers,” Jordan said. “We know that it’s not as intuitive as others would like.”

Jordan said a thorough examination of major national sportsbook operators helped guide an enhancement of GambetDC’s features. The lottery isn’t aiming to revolutionize mobile sports betting platforms, but rather create a platform that effectively mirrors those of industry leaders like BetMGM, DraftKings, and FanDuel.

On DraftKings, a golf bettor can peruse menus at the top showing various tabs with different types of bets. Instead of having to scroll for 15 or more seconds to bet on someone to finish in the top 20, a user can easily select the “top 20” category and find the player they want to back with their bet. 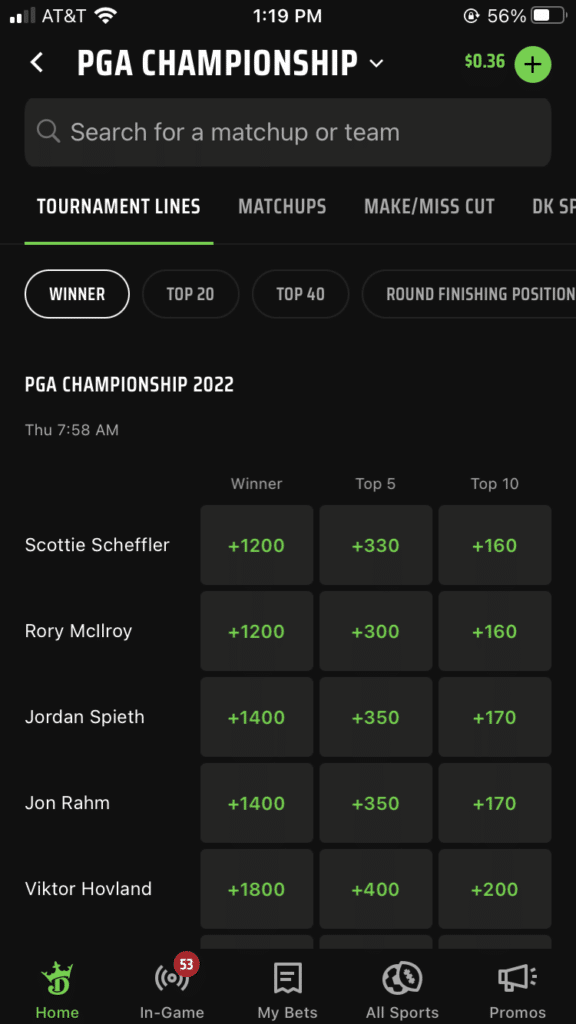 When are changes coming?

Look for GambetDC’s interface changes to arrive in the next few months, and expect to see changes to the web browser, apps, and retail kiosks.

“The goal is to have that actually implemented by football season,” Jordan said. “It’ll be a phased approach, because we’re also adding some additional features to the platform itself, but by football season you’ll be able to see significant changes to the interface.”

Expect GambetDC to add other options such as cash-out functionality that are common on other mobile sports betting platforms. Such changes could help the lottery overcome two years of significant backlash. If they don’t, the D.C. Council could seek a way out of the Intralot contract, perhaps paving the road to expand access for major operators within the District.

Until then, I’ll likely drive to Virginia to bet on the U.S. Open. 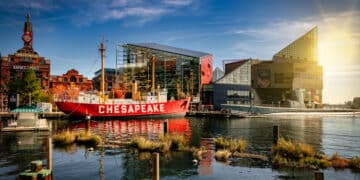