Sports Handle is your place for everything you need to know about legal Delaware sports betting. Delaware became the first state after the Professional and Amateur Sports Protection Act (PASPA) was struck down on May 14, 2018 to offer legal sports betting.

Governor John Carney placed the First State’s first sports bet on June 5, 2018 at Delaware Park. All three of the state’s “racinos” are open for sports betting. Delaware was one of four states, along with Montana, Nevada and Oregon that already had sports betting laws on the books.

up to $100 Instant Deposit Match

According to the director of the state lottery, Vernon Kirk, Delaware was uniquely prepared to offer sports betting as the state was ready to do so in 2009 before a court decision blocked the effort. Kirk said the state really just needed to dust off existing technology and re-train employees on how to handle sports bets.

The state’s Sports Lottery was first introduced in 1976, but didn’t do well and was resurrected in 2009 under then-Governor Jack Markell. The Sports Lottery limits bettors to parlays of at least three NFL games with some teaser games.

Delaware governor John Carney placed the state’s first single-game sports bet (on the Phillies) at Dover Downs on June 5 to much fanfare. In the first month, the state saw handle and revenue that went beyond its projections.

Where you can bet on sports in Delaware

Sports betting is legal at Delaware’s three “racinos”, a racetrack that also has gambling facilities, which may include slot machines and table games. All three racinos have dedicated poker rooms.

The state lottery has a contract with Scientific Games, which is partnered with William Hill US for its sports wagering offerings and risk-management.

There are also over 100 retail locations that have previously taken wagers for the NFL parlay wagers, but they won’t be able to offer full-fledged wagering yet like the location below.

The retail locations will be dealing strictly with college and pro football parlay cards and that’s all for now,” said Delaware Lottery Director Vernon Kirk, in a call with Sports Handle in June.

In response to the Jets' claims, Fubo described the petition as "without merit" and intends to defend its position.

Here’s “Get a Grip,” recapping the week’s top sports betting headlines, highlighting some fresh news, and rounding up key stories. 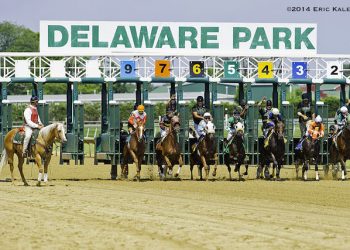 In October, Delaware's total sports betting handle dropped almost $2 million, from $16,830,010 in September to $14,738,223, according to the latest report from the Delaware Lottery. But that $14.7 million September handle is the second biggest since the First State...

On May 14, 2018, the Supreme Court ruled in favor of the state of New Jersey in  Murphy vs. NCAA,  overturning the Professional and Amateur Sports Protection Act (PASPA), the 1992 federal law that prohibited full-fledged sports betting in every state except Nevada.

In essence, that means sports wagering is now a states’ rights issue. Every state is free to choose if it wants sports betting and, if so, how to regulate and tax it.

Since May 14,  legal Delaware sports betting began at its three commercial casinos on June 5. The state of New Jersey accepted its first sports bet at Monmouth Park on June 14.

The road to the United States Supreme Court (SCOTUS) took about seven years in a lengthy legal battle between New Jersey and the NCAA alongside the major professional sports leagues, who used PASPA to block the state from offering sports betting.

The high court heard oral argument in the case in December 2017 and ruled in May. Justice Samuel Alito authored the majority opinion.

In an opinion joined by all of the justices except Justice Ginsburg and Justice Sotomayor, Alito stated:

The legalization of sports gambling requires an important policy choice, but the choice is not ours to make.

Congress can regulate sports gambling directly, but if it elects not to do so, each State is free to act on its own. Our job is to interpret the law Congress has enacted and decide whether it is consistent with the Constitution. PASPA is not. PASPA ‘regulate[s] state governments’ regulation’ of their citizens, New York, 505 U. S., at 166. The Constitution gives Congress no such power. The judgment of the Third Circuit is reversed.”

New Jersey built its case on constitutional grounds — arguing that the law “commandeered” states to uphold its anti-gambling laws, or maintain them, or prevent states from repealing them — in violation of principles of state sovereignty. And it worked.

Congress had overstepped its bounds. Congress could have outright banned sports wagering, and still could, but that’s not what PASPA did.

The case, originally titled Christie v NCAA (it changed with the new governor), was heard by the Supreme Court after making its way through the U.S. Third Circuit Court of Appeals, before SCOTUS granted New Jersey’s petition for a day in the high court.

What was the Professional and Amateur Sports Protection Act?

The Professional and Amateur Sports Protection Act, known as PASPA, is the 1992 law that prohibits sports betting in every state except Nevada. Ironically, New Jersey senator Bill Bradley, a former New York Knick, was a driving force behind the bill.

The key ideas behind the bill were to preserve the “integrity of the games”. Also to stop youths from betting on sports, and to prevent other states from legalizing sports betting.

At the time the law was passed, New Jersey was among the states that had one year to legalize betting. The state failed to do so. Three states, Delaware, Montana and Oregon did take advantage of the one-year filing deadline to continue quasi-sports betting games.

The law grants the U.S. attorney general and the leagues the power to go to the courts to block a state from legalizing sports betting, which is what the leagues have done with New Jersey.