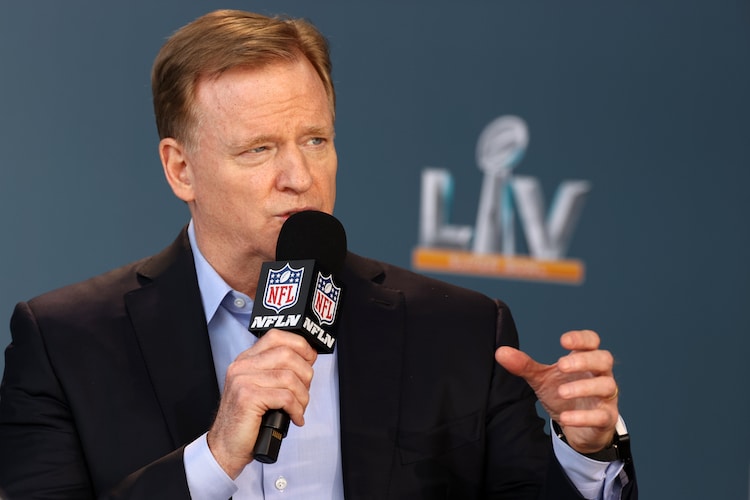 Major League Baseball, meanwhile, launched its season last Thursday with a debut of “Bettor’s Eye,” its own betting-focused show, sponsored by BetMGM, to air on MLB.tv.

The NBA and NHL, of course, have joined those two organizations in the gambling gold rush over the past three years.

It’s all happening even though the leagues, as well as the NCAA, backed the Professional and Amateur Sports Protection Act of 1992 (PASPA) before suing New Jersey 20 years later to try to prevent that state – or any state – from joining Nevada in being able to offer full-fledged, Las Vegas-style sports betting.

To put the depth of the the leagues’ longstanding opposition into context, Sports Handle took a “deep dive” into past formal comments by leaders of the various leagues.

No “quick bucks” from gambling

“We do not want our games used as bait to sell gambling,” Taglibue said. “We should not gamble with our children’s heroes.”

The commissioner expanded on the sentiment:

“Our games embody our very finest traditions and values. They stand for healthy competition, teamwork, success through preparation, and honest effort. With legalized sports gambling, our games instead would come to represent the fast buck, the quick fix, the desire to get something for nothing.

“Our players cannot be expected to serve as healthy role models for youth if they are made to function as participants in gambling enterprises. Legalized sports gambling also sends a regrettable message to our young people that about government – that ‘anything goes’ when it comes to raising revenues or bolstering local economies, and that we might as well legalize, sponsor and promote any activity so that the state can get its ‘cut.'”

In July 2000, the commissioners of the four longest-standing pro sports leagues wrote to the House Judiciary Committee and sought to exploit an ongoing congressional debate about banning college betting even in Nevada.

“If Congress is prepared to reconsider the judgment it made in 1992 that existing legal sports gambling should be grandfathered, then there is no justification – moral, legal, or otherwise – for limiting such reconsideration to gambling on amateur sports.

“The harms it inflicts are just as real, and the cost to the integrity and reputation of our games, and to our values as a nation, are just as great. … If sports gambling is unacceptable everywhere else as a matter of federal policy, it cannot be acceptable in Nevada.”

If the commissioners’ words had ruled public policy, it seems exceedingly that the 2021 landscape would include the Las Vegas Raiders of the NFL, the Vegas Golden Knights of the NHL, or an NFL Draft scheduled to take place in Paradise, Nevada (originally for April 2020 but rescheduled for 2022 due to the COVID-19 pandemic).

An official statement by the NFL, MLB, NBA, and NHL in December 2002 opposed Delaware’s efforts to mirror Nevada’s betting options.

After stating that team sports “embody our finest traditions and values,” the statement added, “With legalized sports gambling, our games would instead represent the fast buck, the quick fix, the desire to get something for nothing” – echoing Tagliabue’s words of more than a decade earlier.

In February 2006, the same quartet – this time joined by future ally the NCAA – sent a letter to Congress backing passage of the Unlawful Internet Gambling Enforcement Act (UIGEA).

“When sports gambling is prevalent, the games begin to represent a ‘quick fix,’ the desire to get something for nothing, and even corruption” – yet again reprising Tagliabue’s words from 1991.

A year later, in May 2007, the same quintet sent a missive to a House of Representatives committee to voice opposition to House member Barney Frank’s bill that would have allowed mobile sports betting – even though the bill would allow each organization to opt out of authorizing it.

“We have long opposed sports betting because of the harm it inflicts on fans of all ages, professional and collegiate athletes, and the integrity of American sports,” the letter read. Five months later, the organizations asked that no tax revenue for such gambling on their sports be included in estimations, because all of them would exercise their veto on the gambling.

In August of 2012, just after a lawsuit was filed by the leagues against New Jersey’s state law allowing for sports betting at state racetracks and Atlantic City casinos, Goodell provided the court with a declaration.

“If gambling is permitted freely on sporting events, normal incidents of the game such as bad snaps, dropped passes, turnovers, penalties, and play calling inevitably will fuel speculation, distrust and accusations of point-shaving or game fixing.”

Goodell added that legal sports betting would make it more likely that the allegiance of fans would shift from their favorite team “toward an interest first and foremost in winning a bet.”

(Of course, that didn’t stop the NFL owners, during the course of the PASPA lawsuit, from making deals with daily fantasy sports companies making revenue through entry fees charged to customers picking players from a variety of teams.)

In his November 2012 deposition in the New Jersey sports betting case, Goodell was asked if the NFL’s reputation was harmed in playing a regular-season game in London, where sports betting is legal.

“Our reputation where?” Goodell asked.

“Reputation in the United States.”

“I don’t think the people in the United States are aware of those laws.”

“The NFL has been successful in preventing any incidences involving gambling that would harm the integrity of the NFL, correct?”

“If it ultimately is lawful to have sports gambling in New Jersey, does the NFL plan to implement any additional or new procedures to protect the integrity of the NFL?

“Well, we’d have to take that into consideration if it occurs. We don’t believe it’s going to occur, and we don’t think it should occur.”

“Are you having any contingency plans put in place at the NFL in the event it is lawful?

“No, we don’t, because we don’t believe it will be lawful. It’s not now, and it won’t be in the future.”

Evidence hard to come by

“On what do you base the statement that the legalization of gambling in New Jersey will threaten to damage irreparably the integrity of the public confidence in NFL football?”

“It’s a very strongly held view in the NFL, it has been for decades, that the threat that gambling could occur in the NFL or fixing of games or that any outcome could be influenced by the outside could be very damaging to the NFL and be very difficult to ever recover from,” Goodell replied.

“Commissioner, other than the concern about the threat, does the NFL have any evidence that the legalization of sports wagering in New Jersey will harm the integrity of the NFL?”

“We do research, we do other facts about the integrity of our game and that’s important to us. And so we will continue to do whatever we can to uphold that and make sure people have confidence in our game but more importantly believe that the NFL’s doing the right things.”

“The NFL, I believe it’s your testimony, has not conducted any focus groups, independent analysis, empirical studies to confirm the NFL’s concern that the legalization of sports wagering in New Jersey will harm the integrity of the NFL. Is that correct?”

“I am not aware of any specific research of New Jersey law.”

“In your view, does the legalization of sports gambling in Las Vegas undermine the public’s confidence in the character of the games, the NFL games?”

“We would certainly take the position that we would rather not have it happen, yes.”

“Has the NFL considered having a franchise in Las Vegas?

“Not when I’ve been Commissioner.”

“You said that the new sports gambling scheme that New Jersey proposes would also greatly increase the likelihood that the allegiance of certain fans will be turned from teams, players, and high-level athletic competition, toward an interest first and foremost in winning a bet. What support do you have for that statement, Commissioner?”

“And common sense in what way?”

“And that’s the common sense?”

Goodell added that “we don’t do studies on common sense.”

“Do you have any evidence that consumers believe that the NFL supports sports wagering because it’s legal in Las Vegas?

“We don’t have a team there,” Goodell replied.