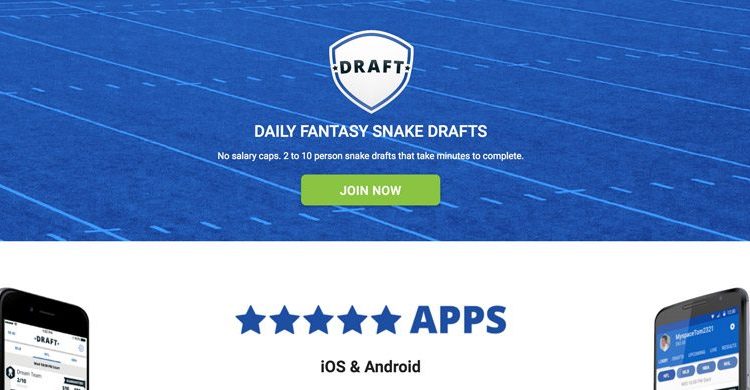 There’s a new player in the daily fantasy realm and it’s simply called DRAFT because it’s predicated on what fantasy players love the most: The Draft.  Each DRAFT contest (playdraft.com), outside of their “Dream Team” format, features a snake draft involving anywhere from 2 and 12 people.

The new platform seems to have mastered the idea of shrinking the season long fantasy feel into weekly contests, because the snake draft format offers the same unpredictability and on-your-feet thinking as typical season long drafts. Here’s the skinny on each specific format for the NFL:

Head-to-head (H2H) drafts permit 60 seconds per pick, while Multiplayer contests with three or more participants allow a mere 30 seconds per pick. With such a quick turnaround, having your players pre-ranked in the correct order is important, especially because your strategy ought to differ based on the size of the league. Fortunately, DRAFT allows users to adjust pre-draft rankings before every draft begins. 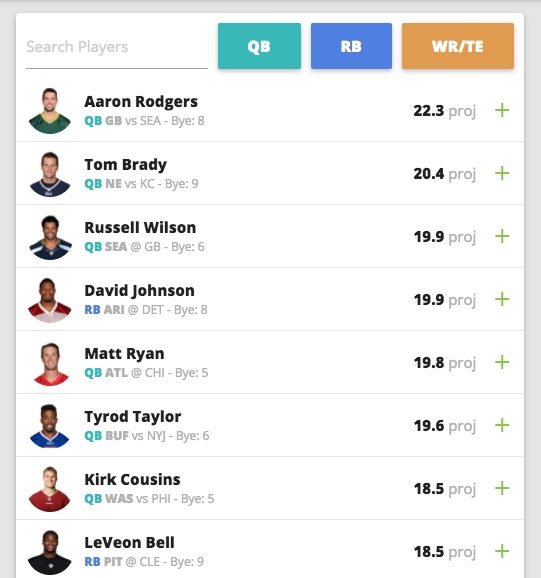 In addition to weekly H2H and Multiplayer drafts, DRAFT features some different options based on NFL games. Let’s start by taking a closer look at the “Best Ball” format.

You can find all of the Best Ball details here, but essentially you draft a team of 18 players and don’t touch it all season long. Just draft and that’s it. And then each week, one QB, two RBs, three WRs, one TE and one FLEX player contribute to your weekly scoring output. Only your top performer at each position factors into your score, while 10 players don’t get counted at all that week.  Best Ball features 0.5 PPR scoring just like DRAFT’s weekly contests and follows the typical 0.1 points per yards and 6 points per touchdown for RBs, WRs and TEs. 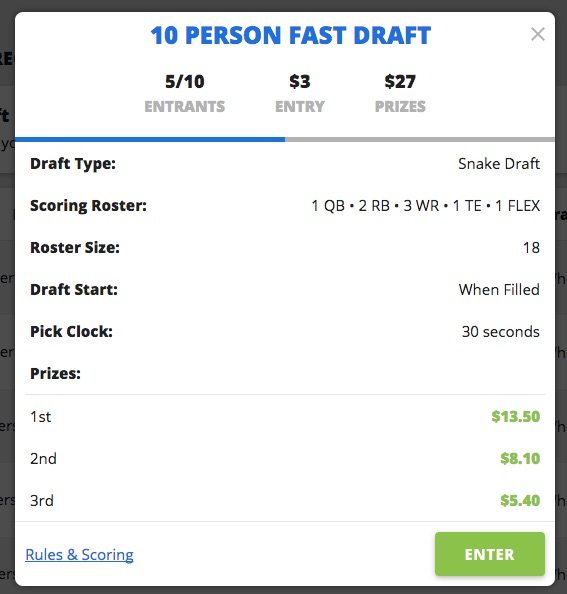 The Best Ball contests include either 3, 10 or 12 participants. In the 3-man contest the top contestant (aggregate points) gets paid at the end of the season (weeks 1 through 16). The top three get paid in the 10-man and four in the 12-man league. DRAFT takes a customary 10% rake. Best Ball contests also allow a “slow draft” option that allows an 8-hour pick clock, for those that might not have access to a device for a while. And in general, all these contests go off as soon as they’re filled.

The strategy behind Best Ball is what makes it so attractive. With no transactions throughout the season, the draft becomes absolutely paramount. A team riddled with injuries (or injury-prone players) can really limit your upside, while guys like DeSean Jackson and Ted Ginn Jr. become more valuable because they tend to post some monster weeks while the majority of their down weeks won’t reflect in the scoring. Also, with a randomized order to the snake draft, participating in several different leagues can produce an array of rosters and expose you to certain players you wouldn’t be interested in for season-long leagues.

I think it’s a great season-long option for those interested in drafting a bunch of teams. It’s also a good alternative for groups of friends who aren’t interested in weekly maintenance but enjoy the drafting process and following along.

DRAFT has created more unique alternatives to traditional DFS games: the Dream Team and Expert Draft weekly options. Dream Team is a format that allows contestants to pick any 5 players they want — regardless of price — to score the most fantasy points possible. There is no salary limit when playing Dream Team, but players still have to meet their positional requirements. The NFL is rather straightforward, but in more top-heavy leagues like the NBA, star players are removed to decrease similarities between lineups and increase the skill needed to play. While it may not be the most skill-driven DFS game we’ve seen, Dream Team is another cool option.

On the other end of the spectrum is Expert Drafts, which eliminate the top projected players at each position from the pool of available players. As a result, players have to dig deeper and find the best match-ups from the mid- and lower tiered options. It provides a perfect counter to the Dream Team format, as there likely won’t be any “lock” selections when choosing teams. Gaining an edge on the field will require more research.

Some additional odds and ends

You can deposit with PayPal or credit cards, make up to 5 withdrawals per month and contest entries range anywhere from $1 to $1,000, last I checked. Also you’d better make sure you allow push notifications from the app on your phone or browser notifications, otherwise the draft may go off without you.

Now several years after DFS burst onto the scene, the community has yearned for some more options and DRAFT has provided just that. The game types are unique, and offer players of all skills and interest levels the opportunity to participate in fantasy sports. I look forward to continue seeing them grow and coming up with more ways to diversify the DFS world.