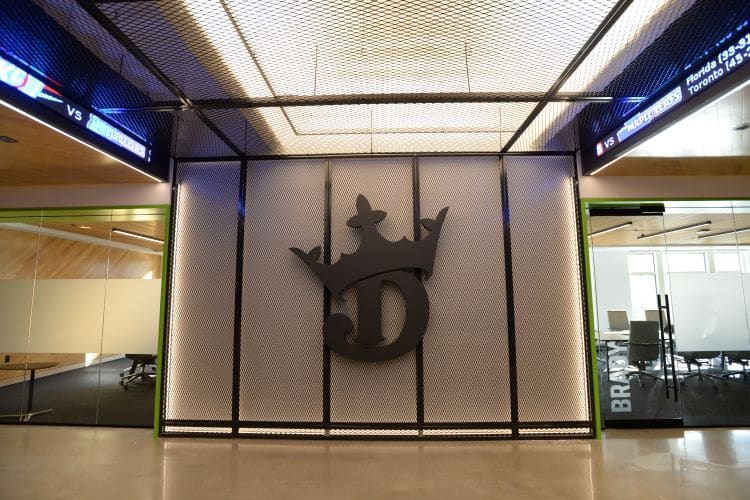 DraftKings endured another volatile trading session on Friday morning, falling near all-time lows in spite of strong growth prospects surrounding its acquisition of Golden Nugget Online Gaming and a top-line earnings beat over the first quarter of 2022.

DraftKings’ shares initially surged more than 5% in pre-market trading, rising above $15 a share as the company increased revenues by 33.6% over the same period from last year. The bounce was short-lived, however, as DraftKings fell as much as 8% in the first hour of trading to $13.11, pennies above last month’s all-time low of $13.06 a share. Analysts attributed the sell-off to larger market concerns, as tech stocks continued to get battered by long-term inflation prospects.

A day earlier, the NASDAQ plunged 5%, its worst session in nearly two years, as investors expressed skepticism about the Federal Reserve’s ability to curb inflation despite its largest interest rate increase since 2000.

Speaking to Wall Street analysts on the company’s 2022 first-quarter earnings call, Robins indicated that DraftKings will employ a multi-brand approach that it expects will enhance cross-selling opportunities and drive increased revenue growth. The acquisition, which was completed on Thursday, is expected to bring expected synergies of $300 million at maturity, including potential technology and game expansion, DraftKings noted.

One of the focal points of the closely watched acquisition is DraftKings’ ambitions to broaden its audience. Robins pointed to the company’s ability to leverage Golden Nuggets’ online gaming brand, where GNOG enjoys a foothold in the market. More specifically, DraftKings intends to grow its customer base by engaging GNOG’s iGaming-first customer to produce higher returns on advertising spending and stronger cost efficiencies.

$DKNG CEO Jason Robins on acquisition of Golden Nugget Online Gaming: “We are well prepared to integrate our respective businesses, begin executing on our multi-brand strategy, and capture Adjusted EBITDA synergies which we expect to reach approximately $300 million long-term.” pic.twitter.com/bjfjBhN2Hd

DraftKings reported adjusted earnings per share of -$0.74, which beat the Nasdaq consensus estimate of -$1.15. Despite the beat, the company still reported net losses of $467.7 million, up from losses of $346.3 million in the same quarter a year ago.  While DraftKings announced in February that it intends to achieve profitability by the fourth quarter of 2023, the company has reported losses in excess of $100 million in every quarter since it went public in April 2020.

DraftKings also had revenues of $417.2 million for the three-month period ended on March 31, slightly topping the Zacks consensus estimate of $404.2 million for the quarter. Moving forward, DraftKings is increasing its revenue guidance from a range of $1.85 billion-$2 billion to a range of $1.95 billion-$2.05 billion, which equates to year-over-year growth of 49% to 56%.

One metric that DraftKings utilizes to measure user engagement performed well over the quarter. as the company’s Average Revenue per Monthly Unique Player (ARPMUPs) came in at $67 — an increase of 11% from an average of $61 per player during the first quarter of 2021. DraftKings attributed the improvement to increased user engagement and its ability to cross-sell customers to other verticals of its business.

Still, DraftKings noted that the increase was partially offset by atypically low hold rates, primarily during the NCAA Tournament. DraftKings CFO Jason Park indicated that the company took a $25 million hit in revenue purely from sporting event outcomes, while Robins alluded to customer winnings from Saint Peters’ improbable run to the Elite Eight as a factor in the lower holds.

Robins is confident that new online sports betting offerings will help the company increase its margins in the coming months. Furthermore, he noted that DraftKings’ same-game parlay product is still in its infancy, since the company launched the product only six months ago. Robins views same-game parlays as one of DraftKings’ largest drivers of upward holds in the relatively near future.

Game outcome is an addback for $DKNG? It's so ridiculous to adj. hold %.

Another point, they emphasize the same game parlay product offerings and driving players to use it. That is, IMO, predatory. The entire hope is parlays/iGaming.

While DraftKings has yet to go live with online sports betting in Ontario, the company intends to launch by the second half of 2022. Robins emphasized that DraftKings’ market share in Ontario could be compromised by the prevalence of gray market operators in Canada‘s largest province.

DraftKings projects that the acquisition of GNOG, along with its expected launch in Ontario, will contribute an additional $130 million-$150 million in revenue for Fiscal Year 2022, the company wrote in an investor presentation. DraftKings’ 2022 full-year guidance excludes the GNOG acquisition and several anticipated new launches in U.S. states, as well as Ontario.

DraftKings online sportsbook is live in 17 states, with future plans to go live in Ohio, Maryland, Ontario, Puerto Rico and Kansas (assuming it's sports betting bill is signed into law as expected) ; $DKNG also has its iCasino live in five states

During the first quarter of 2022, DraftKings incurred sales and marketing expenses of $321.5 million, up from $228.7 million in the previous year’s quarter. It marked the seventh consecutive quarter that expenses in the category topped $170 million. Although Robins did not provide a breakdown on marketing expenses per state, he did admit that the company’s launch of online sports betting in New York provided headwinds.

As the U.S. sports betting market matures, Robins anticipates that “promotional intensity” for new user offers will soften. DraftKings also expects that marketing expenses will abate as the company continues to transition to a national advertising strategy. Expenses in the category ballooned in DraftKings’ first years as an online sportsbook operator, as the company focused on its local advertising strategy shortly after the Supreme Court’s repeal of PASPA.

The acquisition of GNOG also raises questions about the timing of DraftKings’ potential sports betting licensure in Nevada. While Boston-headquartered DraftKings has an application on file with the Nevada Gaming Control Board (NGCB), it is still unclear if the company’s licensing hearing will be on the agenda at the NGCB’s next scheduled meeting in June. The Golden Nugget Las Vegas Hotel & Casino has approximately 38,000 square feet of gaming, including a retail sportsbook.

“The application is being actively worked on by a team and will be on an agenda as soon as the investigation is completed,” the Nevada Gaming Control Board said in a statement provided to Sports Handle. “We have no further comment.”

Wow, very interesting development. DraftKings is being very active with celebrity/athlete advisors, sponsorships, and acquisitions right now and a move like this is yet another big bet on their future. A license to operate in Nevada must be coming sooner rather than later too. 🤔

As part of the acquisition, DraftKings and Fertitta Entertainment expect to rebrand several retail sportsbook locations at Fertitta Entertainment-owned Golden Nugget properties into DraftKings sportsbooks. Robins said little Friday about DraftKings’ prospects of gaining licensure in Nevada, other than reiterating that the company is intrigued by the possibility of expanding into the state. In October, DraftKings announced plans to open a 90,000-square-foot office in southwest Las Vegas.

As of 12:30 p.m. ET Friday, DraftKings traded at $13.76 a share, down about 4.7% on the session. DraftKings is down considerably from its levels last spring, when the company traded at an all-time high of $74 a share.