Will DraftKings’ Prolonged Battle With Short-Sellers Intensify In 2022?

by Matt Rybaltowski
in Features, Sports 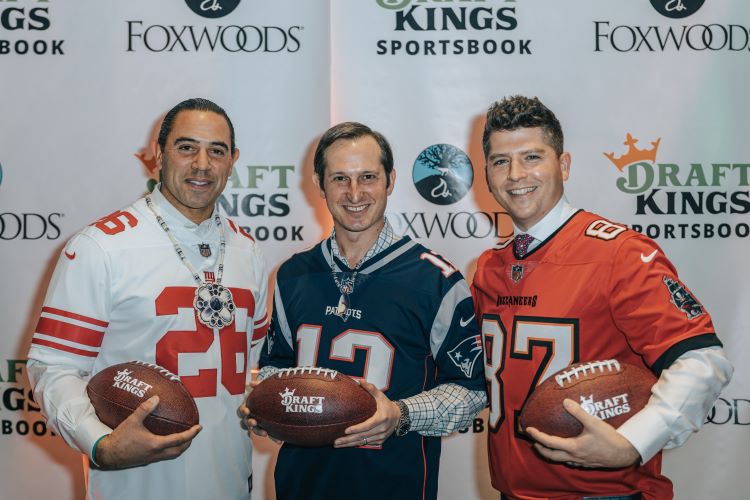 As DraftKings moves closer to its highly anticipated mobile sports betting debut in New York, the industry heavyweight continues to fend off a nasty battle with a famed short-seller.

DraftKings CEO Jason Robins made an impromptu appearance this month on CNBC one day after Kynikos Associates founder Jim Chanos disclosed on the network that he has been shorting DraftKings for most of the year. Chanos, who has also taken short positions on Tesla and Uber in recent years, remarked that DraftKings could increase revenues four-fold while keeping expenses level and still lose $200 million a quarter.

Chanos cited a metric often used to value early-stage tech companies in claiming that DraftKings traded last month at “30 times runway revenue.” In finance parlance, “a runway” refers to the amount of time a company has before it runs out of cash, on the condition that it does not raise additional funds.

Robins immediately questioned the calculations, contending that Chanos’ math “made little sense.” DraftKings did not trade anywhere near the 30x valuation, Robins argued, but closer to levels that were less than half of that. DraftKings ended the third quarter of 2021 with approximately $2.4 billion of cash on its balance sheet, the company disclosed last month.

"We are not trading anywhere near 30x revenue. It's less than half of that," says @JasonDRobins. "@WallStCynic is a smart guy I'm sure he knows better–we are not really focused on people selling short. We are focused on people who are believers." pic.twitter.com/b237MCB7Tr

Chanos is not alone in taking a considerable short position in DraftKings. As of Dec. 15, short interest in DraftKings eclipsed $1.1 billion, with 39 million shares shorted, according to Ihor Dusaniwsky, managing director of Predictive Analytics at S3 Partners LLC, a financial analytics firm.

S3 Partners has seen consistent short activity on DraftKings in 2021, as the total amount of shares shorted have nearly doubled over the last 12 months. Since Dec. 15, 2020, DraftKings shares’ shorted are up by 18.6 million shares, worth approximately $534.8 million, as shorts flourished while the stock plunged. On Monday, DraftKings set company highs for the amount of shares shorted and the short interest as a percentage of float, at 39.6 million shares and 12.2% respectively, Dusaniwsky noted. Typically, when short interest as a percentage of float tops 10%, the figure is considered to be relatively high and indicative of pessimistic sentiment in a stock.

Short activity in DraftKings since Jan. 1, 2020

“Even if DraftKings has a short-term rebound, short-sellers are now playing with house money and are more likely to hold onto their positions even if they suffer some smallish short-term losses,” Dusaniwsky told Sports Handle.

On Thursday, DraftKings traded at $28 in the morning session, down about 60% from its 52-week high in March. Sports betting stocks have rebounded slightly from November’s crash, when a bevy of industry giants plummeted 25% or more amid concerns about long-term profitability and the omicron variant of COVID-19.

When DraftKings announced a business combination with SBTech and Diamond Eagle Acquisition Corp. (DEAC), a special-purpose acquisition company, in December 2019, the company released a 25-page investor presentation detailing its long-term strategy. In outlining a path to annual EBITDA of $1.2 billion, DraftKings projected that it would require $3.7 billion in net revenue — an estimated $2.3 billion of which would come from online sports betting — to arrive there.

The projections assumed that approximately 65% of the U.S. population had access to legalized sports betting, with DraftKings achieving roughly 25% market share. The forecast also projected marketing expenses of $400 million a year.

Last month, DraftKings set full-year 2022 revenue guidance of $1.7-$1.9 billion, while projecting 2021 revenues of $1.26 billion. During the third quarter, DraftKings had revenue of $214 million, a year-over-year increase of 60.4%, but reported adjusted EBITDA of negative $313.6 million. The company incurred net losses of $545 million during the quarter, leading to earnings per share of negative $1.35.

“You can believe in sports betting, but this business model is flawed,” Chanos told CNBC.

Why go long on DraftKings?

One of the most compelling arguments for “buying the dip” lies simply in the fact that the U.S. sports betting gold rush is still around halftime. Though more than 30 states have legalized sports wagering, you likely won’t be able to bet on your phones in California until 2023 at the earliest, and the return of mobile betting in Florida is uncertain. Goldman Sachs projects a $40 billion total addressable market for sports betting at maturity, but current estimates peg the market at less than a quarter of that.

Still, the market is growing at a rapid clip. Maryland went live last week, with New York set to make its mobile sports betting debut before the Super Bowl. In Ohio, a sports betting bill sits on Gov. Mike DeWine’s desk, while Massachusetts, Georgia, and Missouri could all legalize at some point next year. Remarkably, 43 months after the Supreme Court’s historic PASPA decision, none of the nation’s top four states by population — California, Texas, Florida, and New York — offer mobile sports betting.

With a combined 110.3 million residents, the four states represent one-third of the nation’s population. A strong start out of the gate in New York could buttress investor sentiment. On Tuesday, DraftKings disseminated an email to New York customers alerting them that a pre-registration period is approaching. 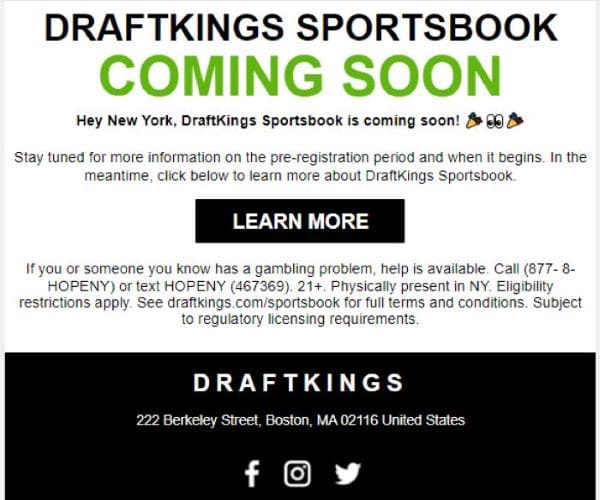 If DraftKings’ market share in the Empire State aligns with trends across the nation, the company may top $100 million in pre-tax gross gaming revenue (GGR) in Year 1. While nine sportsbooks are expected to offer mobile sports betting in New York by early next year, the operators will pay the state a 51% tax on their online gross gaming revenues — the highest rate in the country. Robins still believes DraftKings can achieve long-term profit margins in New York by pursing a “two-to-three-year path” to profitability.

Despite the recent downturn, Robins is sticking to the company’s long-range playbook. While DraftKings’ marketing expenses have topped $170 million in each of the last five quarters, Robins is confident that the marginal costs will abate as more customers come aboard and the company executes its national advertising strategy.

For those who don’t know the $DKNG story:

Well-capitalized sportsbook operators with backing from major institutional investors can absorb hundreds of millions in annual expenses, while the smaller companies cannot. By 2030, many of those companies may be swallowed up by the larger fish in the sea. DraftKings’ $1.56 billion acquisition of Golden Nugget Online Gaming is expected to close early next year. In October, DraftKings abandoned a $22 billion proposed acquisition of U.K.-based Entain, one that would have created the world’s largest gambling company.

Irked by Chanos’ position, a group of traders assembled on the Reddit forum WallStreetBets, determined to squeeze him out. On Wednesday, investors created another forum on the site, this time focused on whether DraftKings presents a buying opportunity at current levels. 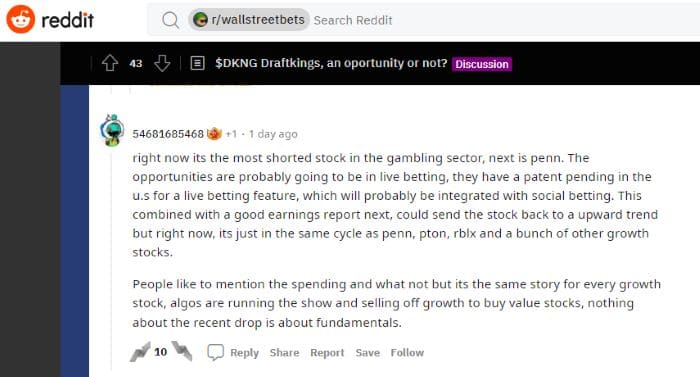 Inflation and other macro factors

Investors must also keep an eye on key macro factors, namely inflation. Beyond gambling, growth stocks in general tend to perform poorly in a high inflationary environment. On Wednesday, Federal Reserve Chairman Jerome Powell signaled that the Federal Open Market Committee (FOMC) will accelerate the tapering of its asset purchasing program, while potentially lifting interest rates three times in 2022. DraftKings finished up 3% on the session.

Robins did not address Chanos’ comments or his views on the New York market at last week’s grand opening of a DraftKings’ retail sportsbook at Foxwoods Resorts Casino in Connecticut. Once DraftKings adds mobile in New York, the company will have online sports wagering in every key Northeastern state except Massachusetts, home to its 100,000-square foot headquarters in Boston’s Back Bay.

As DraftKings stays laser-focused on achieving explosive growth into 2022, it remains to be seen whether bearish investors will hold onto their shorts. Dusaniwsky, for one, expects short-selling in DraftKings to remain elevated.

“Shorts have ridden their hot streak and doubled down their bets in DraftKings in 2021,” Dusaniwsky said. “We see continued short-selling in the near term, as DraftKings’ stock price weakness is drawing more betting on the ‘don’t pass’ line.”