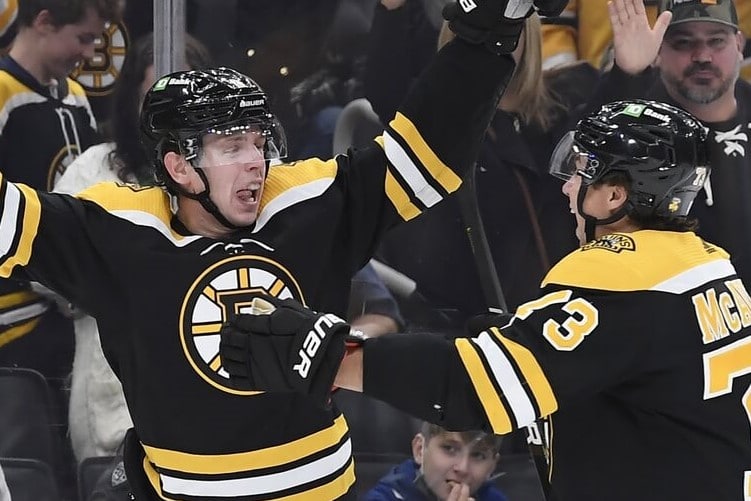 The multi-year deal lays the groundwork for DraftKings to be the Bruins’ and TD Garden’s sportsbook partner when sports wagering becomes legal in the state of Massachusetts.

“The Boston Bruins are excited to announce this new partnership with DraftKings, a Boston-based company that has established itself as the premier hub for daily fantasy sports,” said Bruins President Cam Neely in the release. “We are looking forward to collaborating with DraftKings to continue to provide the best possible sports and entertainment experience for our fans at TD Garden.”

Today, @DraftKings announced a deal with the @NHLBruins to become the exclusive, Official DFS Partner of the team and @tdgarden. We're excited to team up with our hometown team to provide fans with a premier sports entertainment experience. Full release: https://t.co/oduuiFg38z pic.twitter.com/Gyec7kpEcV

DraftKings operates mobile sports betting in 15 states, including nearby Connecticut and New Hampshire.

“We are thrilled to announce our latest team deal with the Boston Bruins, an exceptional team that like us is relentlessly focused on the fan,” said DraftKings Chief Business Officer Ezra Kucharz. “I’m looking forward to seeing our partnership and branding greet fans wherever they are — online, through the premier Boston Bruins Foundation 50/50 raffle which galvanizes viewers while advancing fantastic charitable causes, and in-person, including with the iconic, supersized, digital LED billboard facing inbound traffic into Boston’s famed TD Garden.”

The Bruins weren’t the only NHL team to announce a partnership Thursday, as the New York Rangers made a  sports betting and daily fantasy deal with Caesars Sportsbook. The pact also includes partnerships with the National Basketball Association’s New York Knicks, the MSG Network, and Madison Square Garden.

In a play for New York, @CaesarsSports partners with #Knicks, #Rangers and Madison Square Garden.

Direct access to fans in stadium and over the airwaves, as well as chance to build out sportsbook.https://t.co/vNBocQBzc5

In July, DraftKings partnered with the Boston Red Sox to become the baseball team’s official DFS partner, and the company previously landed pacts with the Boston Celtics and the New England Patriots. With the addition of the Bruins to its roster, DraftKings now has deals with all of Boston’s major professional sports teams.

Legalization of sports betting in Massachusetts is unlikely this year, as conflict surrounds the issue of betting on college sports. As a result, sports bettors in the state have been crossing state lines to Connecticut and New Hampshire in order to place wagers, according to GeoComply.

For the last two years, more than a dozen sports betting bills have been filed and discussed on Beacon Hill, but all bills must run through the Economic Development and Emerging Technologies Committee, which has not yet come to a consensus.