Listen, getting this whole tale in a headline is a fool's errand, so just grab a cup of coffee and read on 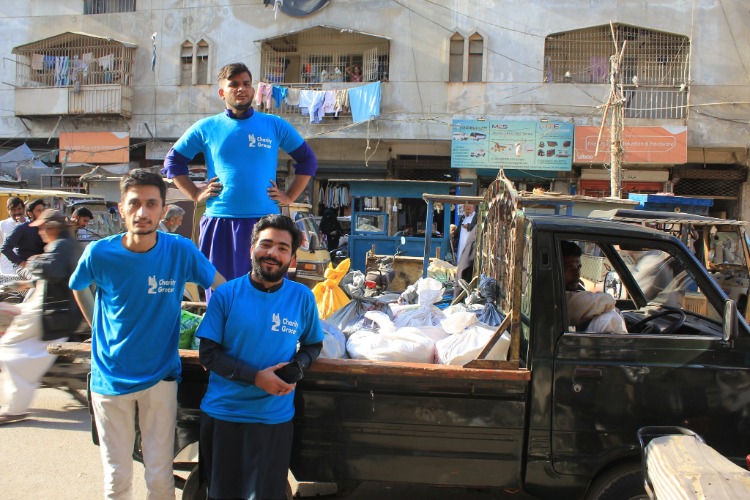 If you had told me at the start of business Tuesday that I would be called an “idiot” by the CEO of DraftKings and then, moments later, play a not-insignificant role in securing $100,000 for the building of water wells in the poorest parts of Pakistan, well, you could’ve knocked me over with just the mere whiff of a feather.

But you never know, y’know?

It started with the Twitterverse going gaga over the idea that Jason Robins, the CEO of DraftKings — and who no longer thinks of me an idiot, thank you very much, though that comes later — was running a burner account for himself on Twitter. You know, an account to take on the haters.

Is this the most obvious Jason Robins burner of all time? 39 tweets all responses to negative things about Jason/DK. 10 followers with Jason being one lol https://t.co/1FhYDjNPXq

And truthfully, the account — which was under the name of @GazipuraMo — did look a trifle suspicious. Mo had been a Twitter member since 2015, but only started tweeting on Nov. 25 of this year, and all of his tweets were in defense of DraftKings and/or Robins.

One tweet, in particular, stood out. Ol’ Mo asked a question, and then posted directly underneath it “good question!” It seemed as if Robins forgot to switch accounts.

It really did look pretty bad, all things considered. It’s embarrassing to get caught with a burner. Just ask Kevin Durant or Bryan Colangelo.

And when Mo was confronted with this — and more — on Twitter, he laughed it off and pointed people to his Linkedin page, which yielded more information about a man known as Mohsin Gazipura, who listed his job as CEO of Charity Grocer.

Ace reporter to the scene

At this point, I, being an award-winning* journalist, decided to try and track down this mysterious Mo. (*It’s true. I have won one first place journalism award in my life, and it was the first column I ever published. It’s been a steady downhill slide. But enough about me. For now.)

Anyway, I oh-so-cleverly @ messaged the guy on Twitter, and said let’s talk, and he said, “sure, in 15 minutes” and next thing you know I’m talking to Mo and — unless this was a seven-year catfishing plan meant to ensnare me — I am wholly convinced that Mo and Robins are not the same person, not connected in any way. Mo is simply a retail investor who is long on DraftKings and trying his best, via Twitter, to shut up the haters.

So I wrote up the story with the headline, “Does DraftKings CEO Jason Robins Have A Twitter Burner Account?” and the answer to that question was pretty much in the sub-headline, but Robins saw it and … well, he was upset and took to Twitter to show his displeasure, calling me an idiot in a since-deleted tweet.

I then @’d Robins — we had never had any interaction previous to this — imploring him to read the whole article.

And that’s when the wheels of clean water for Pakistanis started spinning.

The word ‘bonkers’ comes to mind

Within minutes, Robins DM’d me, apologizing for the “idiot” remark, though noting the headline was “a bit tough,” which I can grok. I get it. It was a little click-baity, but I stand by it.

What happened next, however, was probably a breach or three of journalism ethics, but whatever.

I basically told Robins it would be cool if he made a donation to Gazipura’s charity, Charity Grocer, which helps get food and water to poverty-stricken Pakistanis in rural areas.

Robins loved the idea. I told him I’d pass along Gazipura’s number, which I put in my phone as “Mo (Not Jason Robins)” because I enjoy delighting myself. I told Gazipura to expect a call. I expected Robins to donate $500, maybe $1,000.

Charity Grocer just received a $100,000 donation from @JasonDRobins! Pakistan is a country that’s suffering! Many people don’t have access to food, water and shelter. Your generosity will help so many people. and I can’t wait to put it to good use. We cannot thank you enough!

“It’s insane,” Gazipura told me. “The truth is I just started this charity with me, and I have some family back in Pakistan, so I have three or four people there, and I think we’ve gotten about $30,000 in donations over the past two or three years. We’re a fairly small charity, but just thinking about what this is going to do for a country that’s struggling, for a country that doesn’t have access to vaccines, doesn’t have access to clean water.

“We’re going to have to move beyond grocery delivery,” he continued. “We can use this money to build wells in rural areas. This is an amount of money we never expected as a donation. I’m in shock. This is insane.”

It’s so much money, Gazipura spent most of the last 24 hours trying to figure out how best to spend it past the wells and the groceries, including using some of it as college funds for Pakistani women.

At any rate, Gazipura said Robins messaged him, thanked him for the support on Twitter, asked to make a donation, and then Gazipura got an email showing the amount.

“I thanked him so much, he said it was his pleasure and that he hopes it helps a lot. Insane. Just insane.”

“I was glad to see there was a silver lining to the situation,” he told me via email. “Through the story, I learned that Mo is not only a believer in DraftKings, but is also doing good for others in need. Supporting people and organizations doing good has been something I have always done. Mo has been highly engaged on social media and showed that he deeply understands the business, which caught my attention. And, after learning about Mo’s charitable work, I was inspired by his cause and wanted to do my part to help and also support him given the unintended attention he received on Twitter as a result of this mix-up.”

And about that “mix-up,” as Robins refers to it?

“I was made aware of the rumor in the lead-up to the publishing of the story, but didn’t think it was anything more than something silly and a byproduct of the age we are living in where misinformation spreads quickly across social media,” he said.

So yeah. Just your average Twitter burner non-story CEO rural Pakistani charity tale. As I said up top: Tough to get in a headline.

All’s well that ends well, I suppose, and yes, that is doubling as a very bad pun.