Well, that's what most of Twitter thought for a minute there, but hold your collective horses ... 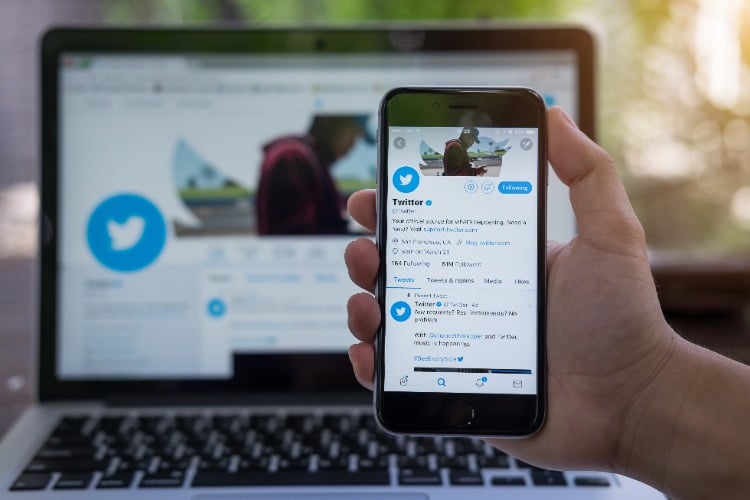 Jason Robins, the CEO and co-founder of DraftKings, is clearly one of the most important and influential people in the sports betting industry.

Mo Gazipura — or perhaps you know him by his Twitter handle, @GazipuraMo — is someone who really, really, really likes DraftKings and Jason Robins.

In fact, Mo is such a DK stan that Twitter was abuzz Tuesday afternoon with the notion the two of them are basically the Spiderman-pointing-at-Spiderman meme.

Yep, for a minute there, it appeared that Robins had a burner account, just like Kevin Durant, Bryan Colangelo, and probably a good chunk of Hollywood and D.C.

This possibility popped up Tuesday afternoon when a Twitter user — @AFrantzie — tweeted “Is this the most obvious Jason Robins burner of all time? 39 tweets all responses to negative things about Jason/DK. 10 followers with Jason being one lol.”

Is this the most obvious Jason Robins burner of all time? 39 tweets all responses to negative things about Jason/DK. 10 followers with Jason being one lol https://t.co/1FhYDjNPXq

This tweet came on the heels of Mo responding to a Legal Sports Report tweet concerning Robins speaking at an investment conference earlier that day, saying that sports betting is “an entertainment activity” and how DraftKings does not want people betting with the company who “are doing this for profit.”

Mo jumped into the fray, saying that was taken out of context, that the quotes from Robins were in reference to bettors who jump from site to site looking for sign-up bonuses.

At this point, it appears @AFrantzie, and others, started combing through Mo’s account, finding … well, finding that every single tweet from Mo — and there’s not a lot of them, as Mo has been on Twitter since 2015 but only started tweeting anything last week — was either in defense of DraftKings or Robins, including one that was particularly damning if you’re on the “Robins has a burner account” train.

It was from last week, and Robins posted a New Yorker cartoon about NFTs and turkeys (and that is allegedly funny). Responding to the tweet was Mo, asking Robins, “As an investor I am concerned with the potential of Disney buying up a competitor like Caesars and integrating SB/DF into its ESPN app. Worst case if this happens, do you believe DKNG could still thrive?”

Then Mo responded to his own question, stating “good question” at 1:35 p.m.

At 1:40 p.m., Robins responded that DraftKings doesn’t fear anyone.

Happy thanksgiving! As an investor I am concerned with the potential of Disney buying up a competitor like Caesars and integrating SB/DF into its ESPN app. Worst case if this happens, do you believe DKNG could still thrive?

Really, it doesn’t take a Sherlock Holmes type to deduce Robins, as Mo, forgot to switch out accounts before responding “good question.”

Case … not so closed.

When confronted on Twitter with the accusation, Mo laughed it off with some “hahahas” and then posted a link to his Linkedin account.

And while Mo’s Twitter account has long been dormant, his Linkedin is much more robust, with 500+ connections, a full bio (he’s the CEO of Charity Grocer Inc., more on that in a minute), and has a handful of recommendations.

So … if Robins does indeed have a Twitter burner account, he also created a deep fake profile of Mo Gazipura. Well, of Mohsin Gazipura, as his Linkedin account shows.

And … he’s also pretending to be Gazipura on a phone call to this reporter.

A call from California

“It was quite a surprise,” Gazipura told me from his San Diego home. “My day is normally wake up, look at the stock market, look at the news, do research, and trade.”

Yep. Gazipura is a stock trader. He also started an advertising agency in 2012 that his partner runs. And that Charity Grocer thing?

“It’s a Pakistan-based charity that helps people that need shelter and food,” Gazipura said. “We basically help them get groceries delivered.”

Yeah. It appears that not only is Gazipura real, but he’s also a real mensch.

“I think it started a week or so ago,” he said. “Years ago I deactivated all my social accounts, but went back on Twitter a few weeks ago to start following the CEOs of the companies of stocks I was invested in. I saw that Robins was getting a lot of hate on his Twitter, so I just responded back with facts. I’ve done a ton of DD [due diligence] on the company, I’ve listened to all his interviews, done a ton of research into the stock, and the stuff people are saying isn’t true. A lot of retail investors are short-term oriented and are upset the price of the stock is down, but what they don’t understand is that the full tech sector is down. I’m just trying to respond, and shed some light on the facts.”

And what about that “good question” tweet about Disney?

“I had no idea Robins was even following me,” Gazipura said. “So when I responded to him, I didn’t anticipate him responding to me, so I wrote ‘good question’ to double respond to his post, so maybe I’d have a better chance at getting a response.”

“And I did feel it was a good question, and it’s a legitimate concern of mine,” Gazipura said. “As a DraftKings investor for 18 months now, the one thing that scares me is not having a big enough moat and Disney sweeping us under the rug. And they have so many millions of users on their ESPN app, if they found a way to buy out Caesars or another sports betting company, it’s going to be hard for DraftKings to recover.”

Not exactly a Robins talking point, that.

In the end, I asked Gazipura point blank if he was Robins or if he was working in tandem with Robins.

“I am not Jason Robins, I never met him, I’m not working with him, but I will continue to be a fan of his even though I have lost a significant amount of money on my 5,000 shares,” he said. “But I believe in the company, and believe in Jason’s data-driven approach, and I will continue to back him by responding to posts that aren’t true.”

Well, there you have it. Mo Gazipura is not Jason Robins. Or I’ve been monumentally catfished (kidding). (I think.) (I hope.) (Definitely kidding.) (And I agree with the Tweet below. We may be living in a simulation.)

We’re living in a simulation https://t.co/hh6lm7eaBN

Worth mentioning: Emails to DraftKings were not returned as of the time of this writing.