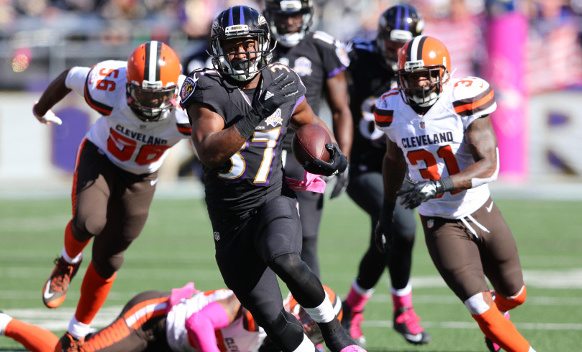 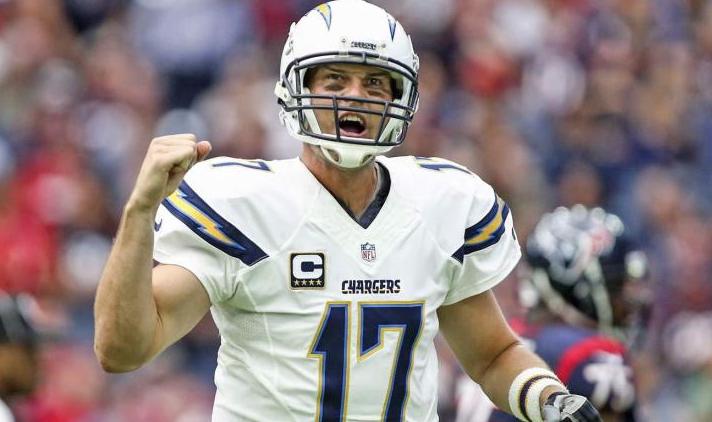 The Chargers have a solid implied team total of 24.8, and are taking on a defense that allowed the fifth-most passing yards per game in 2016 (262.4). The Dolphins allowed the fourth-most fantasy points to opposing QBs last season, including Rivers’ 324-yard, three touchdown game against them (he also threw four picks). He’ll now get to face them with Keenan Allen and Travis Benjamin healthy after they missed the game last year. Rivers was able to throw three TDs against a tough Broncos’ secondary in Week 1, so I expect him to have his way with the Dolphins in their first game of 2017. 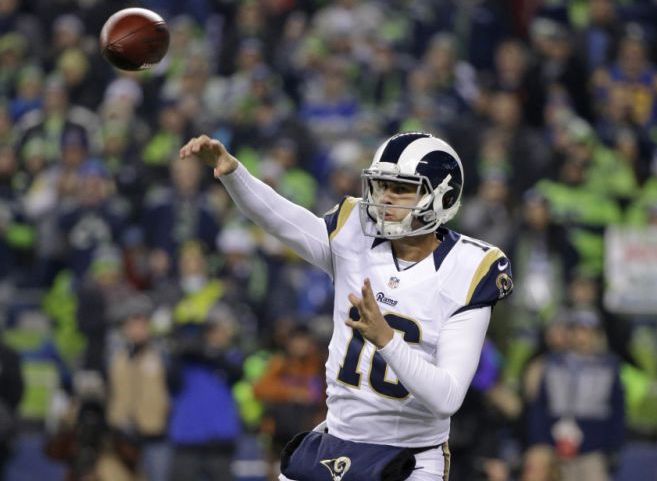 The Rams begin Wednesday as 2.5-point favorites over Washington with a solid point total of 24.3. It’s pretty clear that Sean McVay will produce a much better Jared Goff than Jeff Fisher could, as Goff threw for 306 yards and a TD in Week 1 vs. the Colts. Yes, the Colts are terrible, but the Redskins allowed Carson Wentz to throw for 307 yards and two TDs last weekend. Goff has some legitimate weapons in Sammy Watkins and Cooper Kupp, and while I don’t expect another 300+ yard game, Goff still provides value as an extremely cheap option on both sites. Not to mention, McVay was an offensive coach for the Redskins from 2010-2016, so he went against their defense in practice for seven years. He should have some tricks up his sleeve, and I think Goff will impress football fans for a second straight week. 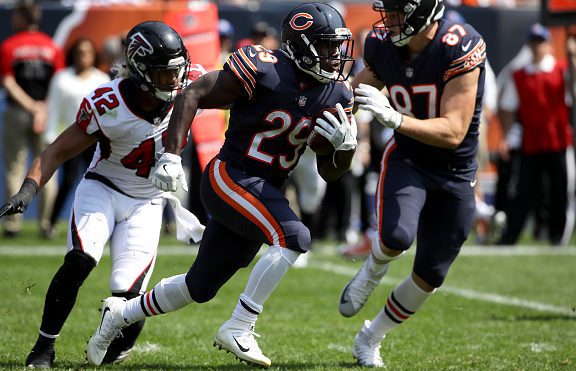 Cohen is no longer a secret in Chicago, as he broke out in his NFL debut with five rushes for 66 yards to go along with eight catches for 47 yards and a TD. The Bears are set up for a similar game script to the one they faced with the Falcons, as the Bucs begin Wednesday as seven-point favorites (same as ATL in Week 1). Cohen led the team in targets in Week 1, finishing with 12 and doubling up the next closest option (Zach Miller with 6). Now that WR Kevin White is out for the season with a fractured collarbone, there aren’t many reliable options left in Chicago. After seeing 42% of the RB snaps in Week 1 and outperforming starter Jordan Howard in the running and passing game, I expect Cohen to remain a fixture in the Bears’ passing attack, which will be utilized plenty against a Tampa Bay team that ought to pace the scoring.

Our second value play at running back comes from a team who lost their passing-catching specialist in Danny Woodhead. Allen will take over for Woodhead in those passing situations, and will likely see some touches on the ground as well. In Week 1 he saw the most carries on the team with 21, but Terrance West wasn’t too far behind with 19. West did get the lone rushing touchdown as well, but it’s clear that Allen will be involved with Woodhead out. With such a cheap price tag facing a Browns team as 7.5-point favorites, Allen will see more than enough opportunities to cash in on his value this weekend. 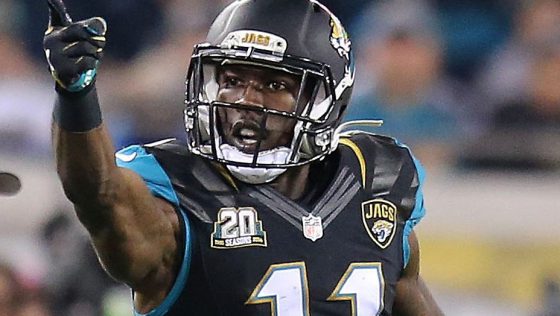 The Jaguars lost WR1 Allen Robinson for the season to a torn ACL, so Lee replaces him there on the depth chart. Although Jacksonville stuck with their game plan in Week 1 of playing tough defense and shortening the game by running on offense, Marcus Mariota and the Titans should provide a tougher offensive threat in Week 2. Blake Bortles was just 11 for 21 with a mere 125 yards passing, but will face a defense he’s thrown 320+ yards against in his last three outings (garbage time counts no less for our purposes). I’m not overly excited to play Lee at a price of $5,900 on FanDuel, but his price of $3,800 on DraftKings is something I can’t ignore. The Titans allowed the fourth-most passing yards and third-least rushing yards per game in 2016, so I expect the Jags to attack their weakness and stray away from their ground-and-pound game enough to give Lee some value this Sunday.

Luckily for us, pricing came out on both sites before Thielen’s nine catch, 157-yard performance against the Saints on Monday night. He remains under our value threshold entering Week 2, so I’ll happily fire him up for a cheap price while I can. I might be overreacting to what we saw in Week 1, but the Vikings have an all-around talented offense. Stefon Diggs, Kyle Rudolph, and rookie Dalvin Cook will all require attention from the Steelers, so I’m still confident Thielen will get plenty of looks. Minnesota will enter as six-point underdogs on the road and offer stiff opposition against rushers, so I expect Sam Bradford to throw consistently throughout the game. I wouldn’t be surprised to see Thielen lead the team in targets and catches once again in Week 2. 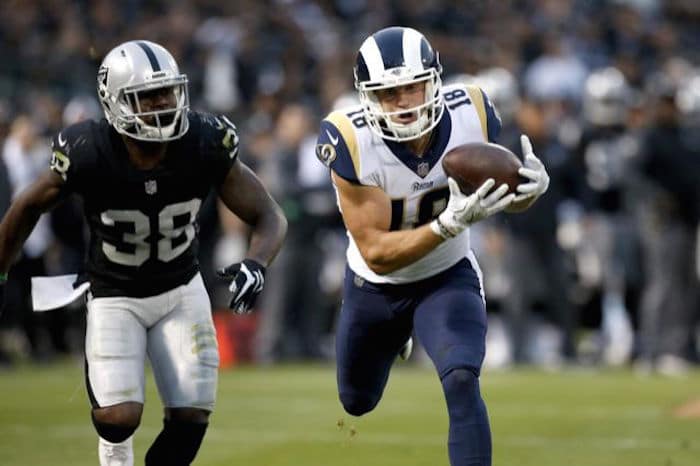 Kupp is another guy we should capitalize on while he’s still at a depressed price. The rookie out of Eastern Washington led the team with six targets, 76 yards, and hauled in the lone receiving touchdown of the game. This comes as no surprise as Kupp led the team in targets during the preseason, and he should have another chance to showcase his talents against the Redskins. Washington finished 29th in DVOA (Defense-adjusted Value Over Average) in 2016 and simply doesn’t have much of a pass rush. Washington’s struggles come mainly in the middle of the field, as they were terrible against tight ends last season and let Zach Ertz catch all eight targets for 93 yards on Sunday. Kupp should be able to own the middle of the field without a strong tight end presence in L.A., and will likely lead the team in targets once again.

It was unclear how the targets would be distributed among Jets’ receivers heading into the season, but it looks like we got a decent answer in Week 1. Kearse led the team with nine targets, catching seven of them for 59 yards. He established himself as Josh McCown’s safety blanket and short-yardage receiver. The Jets head west to Oakland as 14-point underdogs, so they’ll have to throw throughout the game to try and keep up with the Raiders. Oakland’s defense looked solid in Week 1, but volume can overcome a less than ideal matchup. I expect Kearse to see around 10 targets once again, bolstering his floor and making him a solid value play heading into Sunday. 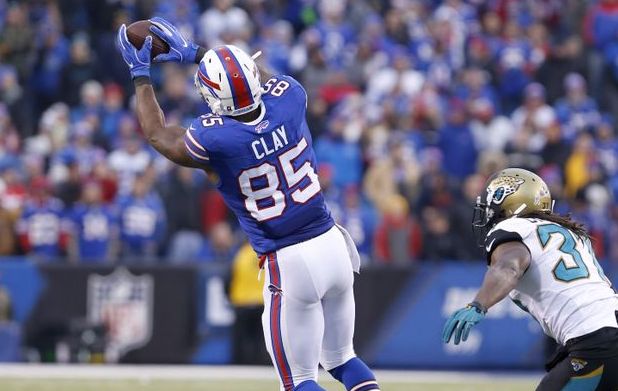 It was abundantly clear that Tyrod Taylor felt the most comfortable targeting Clay in Week 1. One of the lone pass-catching options that returned from last season, Clay saw nine targets from Taylor, with the next closest WR coming in at four (Zay Jones). The Bills will head to Carolina to face a Panthers defense that allowed the second-most points to opposing tight ends last season. Clay enters as the 21st ranked TE in terms of salary on both sites, a position I think he’ll easily outperform. Buffalo enters as seven-point underdogs, so they’re likely to throw more than in Week 1, meaning Clay should see plenty of opportunities.

Dak Prescott’s safety net in Dallas continues to put together solid fantasy outings at the ripe age of 35. Witten finished as TE3 in Week 1, catching seven of nine targets for 59 yards and a touchdown. He’ll be Prescott’s best friend in Week 2 against a Broncos defense that’s relentless rushing the QB and has cornerbacks who can shut down any wide receivers. While I think Ezekiel Elliott will shoulder much of the offensive load, I like Witten’s chances of leading the team in targets and receptions for the second straight week. 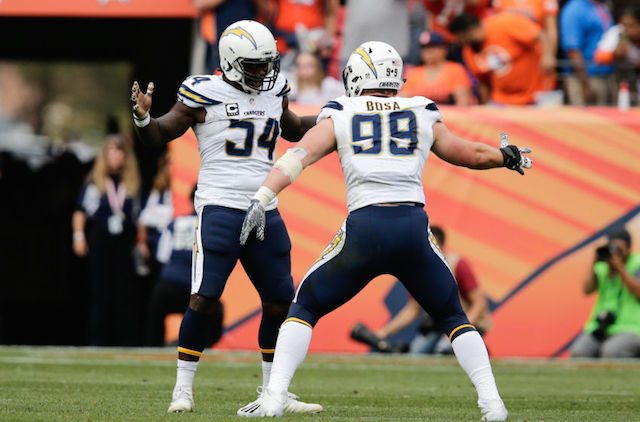 I’m a big fan of the Chargers’ defense at this price in a matchup against the Miami Dolphins. San Diego has a solid fantasy defense, as they have elite edge rushers in Melvin Ingram and Joey Bosa who can rack up the sacks, along with stud corners in Casey Hayward and Jason Verrett to limit explosive plays in the passing game. They’ll face a Dolphins team now led by turnover-prone Jay Cutler. In his career, Cutler has thrown 146 interceptions in 139 games to go along with 32 lost fumbles. Miami had extended time to prepare for the Chargers due to Hurricane Irma, but we saw a majority of offenses struggle in Week 1. I expect Cutler to go through some growing pains with his new team, and think the Chargers will keep the pressure turned up, resulting in sacks on Cutler and likely a turnover or two.