New Hampshire moved a step closer to launching legal sports betting on Monday when the state’s Executive Council voted, 3-1, to approve a contract that makes DraftKings the state’s exclusive operator. According to the terms of the contract, Boston-based DraftKings will operate a minimum of four and a maximum of 10 retail sportsbooks, and outside of the New Hampshire Lottery product, which will be powered by Intralot, it will be the state’s only mobile and internet operator.

Governor Chris Sununu has been an enthusiastic supporter of sports betting and if his comments Monday are any indication, the goal is for DraftKings to be up and running in time for the 2020 Super Bowl.

“We moved fast to get this done, and the deal is a win for New Hampshire,” Sununu said in a joint press release from DraftKings and the New Hampshire Lottery. “We’re partnering with a world-class company to provide a first-rate customer service experience. With today’s vote, everyone will now be able to bet on Tom Brady and the New England Patriots in time for this year’s Super Bowl.”

The Lottery selected only DraftKings out of 13 proposals made to operate retail or mobile sports betting in New Hampshire. The contract makes DraftKings the exclusive operators in the state if the state wants to get 51 percent of the mobile gross gaming revenue and 50 percent of retail revenue. Should New Hampshire decide at any point (within the bounds of the contract) to add an additional operator(s), the revenue share would drop to 21 percent.

There are many in the industry unhappy with the result in New Hampshire, and at least one called it a “rush job.” What is somewhat surprising is that New Hampshire appeared poised to be what stakeholders would have considered to be a model situation with the “open, competitive” marketplace that operators have asked for across the country during legislative hearings. By selecting a single non-Lottery vendor, at least for now, the Granite State eliminated the possibility of competition.

DraftKings offered the highest cut to the state in its proposal, and according to the press release, it also offered the “fastest implementation timeline,” which has been of paramount importance to the Lottery.

NH will be second in region to launch

According to a report from New Hampshire Public Radio, McIntrye told the Executive Committee, “the best money is out of state money.”

The comment reflects the Lottery’s desire to capitalize on being among the first to market in the region. Over the years, New Hampshire has been a destination for Bay Staters to purchase liquor or lottery tickets and to save on sales tax (New Hampshire has none). The state is hoping that sports betting will draw in more more business from its southern neighbors.

In New Hampshire, cities and towns are required to approve sportsbooks within their borders, and so far, five have done so — Berlin, Claremont, Franklin, Laconia, Manchester and Somersworth. Manchester is the biggest city in the state. The state capitol of Concord, and Nashua, which sits near the Massachusetts border, voted against having sportsbooks. 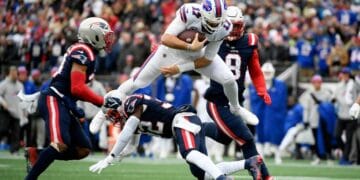