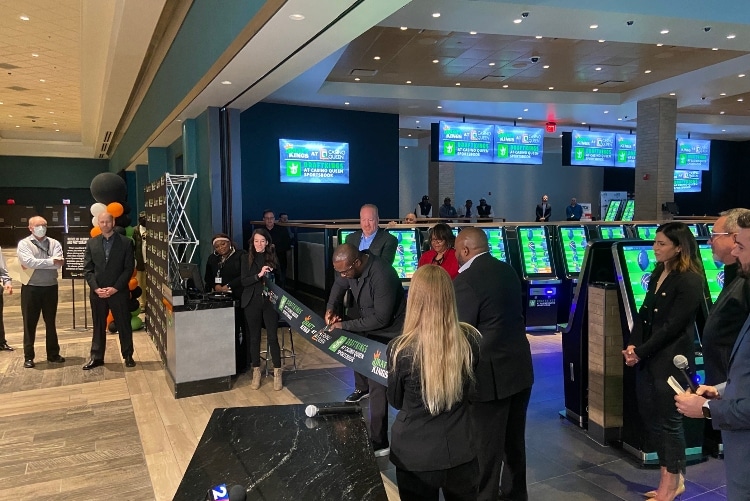 Patrons Derico Chatman and Robert Davis stood outside DraftKings’ newest brick-and-mortar sportsbook at Casino Queen in East St. Louis, Ill., Tuesday afternoon waiting for Marshall Faulk, who won an NFL MVP award while playing just a mile west of the casino, to cut the ribbon during a grand-opening celebration.

It took about three minutes into the conversation for the two St. Louis residents, who had never met before venturing across the Mississippi River for the event, to engage in a lively disagreement about the hottest game in the NBA that night.

“I have to go with Philly on that,” said Chatman.

“I’m taking Giannis [Antetokounmpo] and the over,” Davis responded.

In the end, after Antetokounmpo blocked Joel Embiid’s final shot attempt near the buzzer to preserve a 118-116 Milwaukee Bucks win, Davis got the last laugh. But the exchange illustrates one aspect of sports gambling that sometimes gets lost in the momentum of online sports betting apps nationwide: human interaction.

Nothing can replace face-to-face contact, especially for an American population exhausted by a pandemic and the social isolation it can cause.

“It brings people together, all ethnicities and races,” Chatman said. “It’s exciting, it’s fun. You can win you some money or you can lose you some money. It’s all up to you.”

Faulk, who played for the St. Louis Rams from 1999 to 2005, described himself as a “very responsible, low-key” sports gambler. He, too, sees gambling as an opportunity to engage with his friends and fans. He stood amid the 6,000-square-foot sportsbook, complete with a 60-foot video wall, dozens of high-definition screens, and 30 betting kiosks, and talked about people.

“I’m not trying to get rich off sports gambling,” Faulk said. “I’m literally doing it for the camaraderie and the fun. That’s what gambling is supposed to be. It gives the fan that likes to do casual betting for fun a place to come and really enjoy it, maybe do a little smack talk here and there. I mean, look at this place. Sometimes, guess what? People want to get a victory on me. They want to say they knew better. These types of things give you an avenue to do that.”

Faulk made the first bet of the day at the sportsbook: $100 on the St. Louis Cardinals to beat the Pittsburgh Pirates on Opening Day, April 7. Once the betting began, DraftKings and Casino Queen had waitresses serving cocktails and appetizers to the assorted media members and VIPs who attended the event. The new book replaces the temporary one next door that did not have food or drinks.

DraftKings has tent poles in both ends of Illinois

For DraftKings, the opening of the book after several delays caused by material shortages during the pandemic is a step toward the operator bookending Illinois. With a sportsbook at Wrigley Field already under construction, DraftKings will have splashy brick-and-mortar books at both ends of the state, in the two urban poles: Chicago and the area of the St. Louis metropolitan region that lies in Illinois.

Never mind that mobile sports gambling already is legal in Illinois and that Missouri is rapidly gaining momentum toward legalizing it.

“Look, I’ll shamelessly plug our app all day as the easiest to use, but look at this place,” said DraftKings spokesman Stephen Miraglia. “When you’re in person, screaming and sweating out the game with your buddies from a couch or a barstool, relaxing and having a beverage, that’s certainly something we wanted to provide. I think it might set it apart from just your Sunday afternoon or Tuesday evening when you just want to stay home and watch the game from your couch.”

The location of the sportsbook might come as a puzzler to some people at first glance. East St. Louis, with a median household income of roughly $24,000, is the poorest city in the nation according to analysis by 24/7 Wall St. But the sportsbook lies at the base of the historic Eads Bridge, on the banks of the river, less than a five-minute drive from St. Louis, which has a metropolitan population of about 2.4 million.

“All systems are go, we’ll be live in both ends of the state,” Miraglia said. “That’s the idea, right?”

“Any time you can have any new development and bring any new revenue and resources to your community, it’s awesome,” said East St. Louis Mayor Robert Eastern III. “And just think about it: They started this inside a pandemic. That tells you their fortitude and how they handled this and they took the bull by the horns. And it’s a testament to our city. We’re the city of champions. You’ve got to have that certain grit, like we do, and they’ve displayed that.”