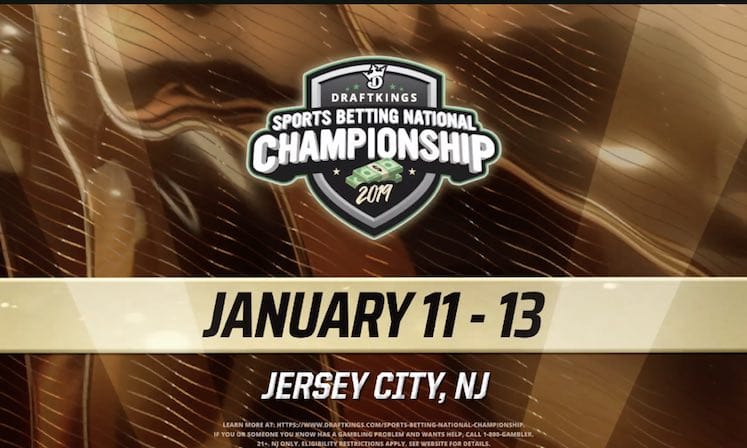 DraftKings is now facing some controversy in the form of bad publicity and, perhaps, some regulatory problems as a result of its first-ever and Sports Betting National Championship (SBNC).

Rleejr86, an alias used by the winner Randy Lee, reeled in the guaranteed $1 million first-place prize in the Friday through Sunday competition in New Jersey. Many of the players gathered at a watch party in Jersey City to make their bets, but the event was open to anyone physically located in the state and using the DraftKings Sportsbook mobile app and web platform to participate.

A controversy, however, has now erupted because third-place finisher Opti5624, the alias of professional gambler Rufus Peabody, was unable to bet the final game of the contest – Eagles vs. Saints – because his winnings on the Chargers vs. Patriots had not been officially added to his bankroll in time for him to make a wager on the last game of the weekend.

Peabody, who did not attend the watch party, soon learned via social media that some participants who did were able to use their first Sunday game winnings rolling the money over on the late game because they went to a “help” desk to expedite the posting of their funds.

Didn't get paid out in time. Brutal. Was going fire $25k on Saints Moneyline/Over parlay. https://t.co/NpOdLeye1m

The event drew 260 entrants who either won their way into the tournament or put up the $10,000 entry fee, with $5,000 going to the prize pool, guaranteed at $2.5 million. That’s an overlay of $1.2 million that attracted a significant number of professional sports bettors.

The top 25 finishers divided the prize money with all participants keeping all their real-money winnings.

Here’s a link to the final scoreboard showing who won what.

But, without any money yet credited to his account he was awaiting the Eagles vs. Saints showdown without any funds to bet it.

My Pats bet didn't grade before the Saints game started, so I couldn't get anything down. This is some sh*t.

It should be noted that entrants were able to bet on any sport on Friday and Saturday, but Sunday’s action was limited to just the two NFL playoff games with in-game wagers permitted on the Chargers vs. Patriots game.

Because all bets on the Eagles-Saints game had to be made before kickoff, because the first game ran longer than expected nearly running into the start of the last game, and because Peabody’s winning were not credited to his contest account, he was unable to bet the last game.

Afterwards, Peabody said he was constantly refreshing his screen to see when his winnings would show so he could check the leaderboard to see what he would need to do with his final wagers. But, the Eagles vs. Saints game kicked off before the money was posted.

As reported by Dave Tuley of VSiN, Peabody said, “Since I never saw exactly what position I was in, I never decided exactly what I was going to do. I really liked the under, so I was considering maybe parlaying that with a bet on Saints, but not sure if I would have used the money line or an alternate point spread – such as -3.5 instead of the game line of -8.5 – and ran out of time.”

Peabody said he was pretty sure that most of the contestants chasing him would use the Eagles on the money line and “if they won outright, I’d be toast,” but he said he would have felt comfortable with the Saints and the under for the $1 million prize. Instead, his hands were tied and he was unable to bet the game at all. He finished third with his bankroll of $81,891.83 to collect third-place money of $250,000 after being passed by rleejr86 and one other player.

Peabody continued, “I wasn’t at the watch party but I heard that some players were able to get their plays graded earlier by going to the help desk,” he said. “That’s not right. All plays should have been graded at the same time but it appears some were manually graded and it wasn’t a level playing field.”

Peabody expects to examine what legal recourse he has. It’s unknown if New Jersey gaming authorities will intercede in what could be a legal dispute.

This is what it feels like to win $1 million! Randy ‘rleejr86’ Lee in the winning moments at the DraftKings Sports Betting National Championship. #SBNC pic.twitter.com/vnWWtIiBxm

James Chisholm, a DraftKings spokesman, released the following statement after the tournament:

“The first-ever Sports Betting National Championship was an incredibly thrilling event. We recognize that in the rules the scheduled end of betting coincided very closely to the finish of the of Patriots-Chargers game. While we must follow our contest rules, we sincerely apologize for the experience several customers had where their bets were not graded in time to allow wagering on the Saints-Eagles game. We will learn from this experience and improve upon the rules and experience for future events.”

The statement is unlikely to put any cash more in Peabody’s pocket because it’s can’t be known how he would have wagered his winnings had he been able to access them.

Too Much, Too Soon

Here at the @DKSportsbook for the kickoff of #INDvsKC. The VIP lounge is pretty great. #SBNC pic.twitter.com/EzM3wiHKAR

Industry observers are speculating that the SBNC problems were caused by DraftKings desire to offer a promotion too hastily as the NFL season in drawing to a close. Such, contests for horse players have also been plagued by software glitches and rules problems over the years. Contest rules for horseplayers that, although may have seemed fair on the surface, were being utilized by some players to gain an unfair advantage.

Another issue is the variance between contests using “live money” and those in which players use a theoretical bankroll.

Horse racing has popular contests using both methods and there remain supporters of both kinds of competitions. Those opposed to horse racing contests using theoretical money note that because the money is not part of the pari-mutuel pool the win prices that determine the contest winner do not really reflect the true winning pari-mutuel price.

They also note that the mind set for wagering is entirely different in a “live money” contest in juxtaposition to “dead money” contests in which a certain number of bets are mandated at a certain theoretical dollar level.

Look for these types of contests to continue, but with lots of tweaks to make sure all entrants are treated equally. Also look for a detailed examination of how the mobile world impacts such contests. Some entrants reported having difficulty registering for the event at the DraftKings Sportsbook at Resorts Atlantic City, as well as issues opening tournament accounts and being unable to access the sportsbook online for portions of the time when the contest proceeded.

No one can fault DraftKings for trying such an event, it’s regrettable they may not have been quite ready.