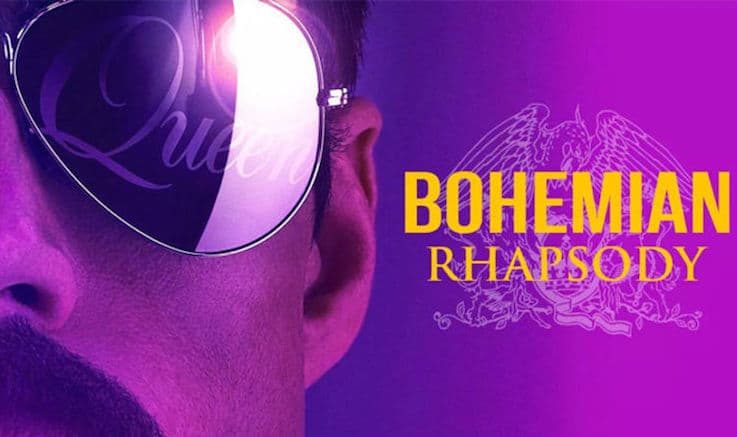 The 91st Academy Awards ceremony will mark at least two milestones: it will be the first time since 1989 that the show will go on without a host, and the first time that U.S.-based sportsbooks will be offering legal betting markets on the show.

For a complete breakdown on the movies, betting action to date, potential upsets and how DraftKings Sportsbook set their odds, I caught up with DraftKings’ Director of Sportsbook Operations, Johnny Avello.

We covered a lot of ground and in a footnote that probably few will care about, Avello and I discovered mid-conversation that we’re both natives of Poughkeepsie, New York. (The actor who played bassist John Deacon in Bohemian Rhapsody is Joseph Mazzello, who grew up in the area.) So, shout-out to Po-Town.

Sports Handle (SH): How much action have you guys seen so far on the Academy Awards betting?

Johnny Avello (JA): You know, it’s not earth-shattering. It’s not like it’s basketball or football, but it’s something else that adds to the overall menu. And as we get closer to the event on Sunday, I think it will pick up more.

SH: So far what’s the most heavily bet film that’s up for Best Picture?

JA: The money is kind of spread out on everything else but the favorite. You know, BlacKkKlansman, Black Panther, [Bohemian] Rhapsody, they’re all drawing a little bit of money. Not much interest in anyone laying $3 to win $1 on Roma.

SH: Are there any categories outside of the Big Six that are seeing some volume that maybe surprises you a bit?

JA: I’m not going to tell you that there’s a whole lot of big action, because there’s not. It’s small stuff right now. I think most of the smaller money is on trying to take a 12-1 shot, Best Film Editing BlacKkKlansman at 10-1, or The Star is Born in Adapted Screenplay at 20-1. Those types of bets.

SH: You said there hasn’t been a ton of action yet, but as it stands, on which actor/actress or film do you guys have the most exposure?

JA: I haven’t checked today but I would say it may be Black Panther. Because the odds are so high. You know Green Book got a little money. I’m sure come Sunday, there’s going to be a lot more exposure, but at this point it’s rather light.

SH: In your estimation, having seen all the movies, do you think there’s one category potentially ripe for a longer shot to hit?

JA: In the majors or anywhere?

For Best Supporting Actress, I believe Regina King deserves to be the favorite and could win it, but Amy Adams, who’s certainly well-known for her whole body of work, she could be a surprise there. 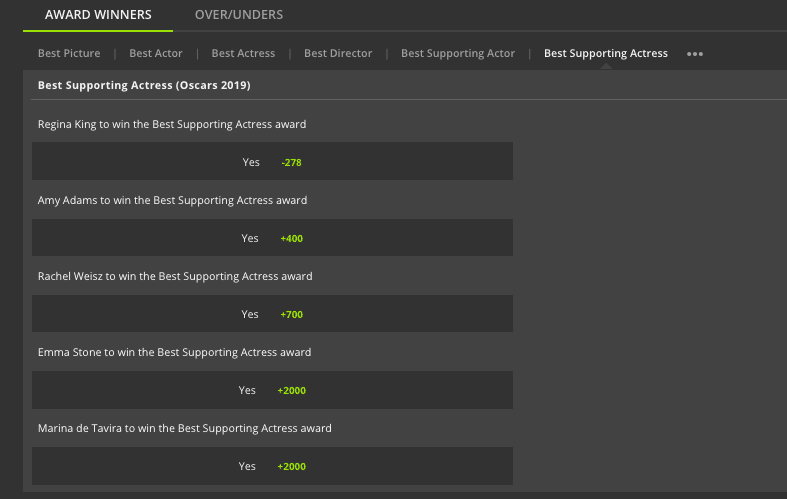 But I wouldn’t go much further than the second choices in most categories. Let’s see, another one, maybe in Film Editing, to me that’s wide open. I could see even a Rhapsody or BlacKkKlansman winning there. No surprise in Animated. I think Spider-Man is for sure going to take there. The Original Score, I kind of like the second choice a little. I get that If Beale Street Could Talk is the favorite, but I kind of like Black Panther a little as the second choice.

So there’s some categories that are pretty clear cut. I’d say there’s 8 to 10 that are clear cut and then there’s a whole bunch that are wide open, where you’ll see a couple of surprises. In my experience, through the years in the Oscars, the biggest surprises come in the Supporting Role. Now this year, I don’t think Mahershala Ali is going to lose. Regina King is not as big a favorite as he is. But that’s where I’ve always seen the biggest surprises because, maybe because the supporting actor doesn’t carry the movie, so that’s where I’ve had some eye-opening experiences through the years.

SH: From what I’ve seen at some of the other New Jersey books, the max win is set to $1,000, is that also true for you guys?

JA: That’s correct. That’s what the [Division of Gaming Enforcement] told us to do. And so that’s the way it’s set up.

SH: How did you guys go about handicapping the Oscars?

JA: I’ve been making Oscar odds since 1994. This is something I’ve been doing every year now for 25 years. And the way I do it is, I see all the movies, I do my research, I talk to some people that are so-called insiders to get their opinions, and then go ahead, and I usually do these way before the nominations come out. So I’m kind of ahead of the game on it. Now that doesn’t always mean that I am right. I think my track record on the top six categories, I think I’m 78% over 25 years. And I started doing all 24 categories about 7 years ago.

SH: Are you seeing some new customers coming in to bet the Academy Awards? Or is it mostly existing users getting down on Oscars?

JA: We’ve got a lot of users. We have a huge base and, if you’re asking me if anyone is signing up to bet it, I would say few. But they also have the opportunity to go to the retail location at Resorts in Atlantic City and play it. I know for sure there’s some people because I spoke to them that have actually gone to bet it, that aren’t sports bettors. So it’s attracting a different type of person that would like to wager. Not everybody is a sports player, and there’s some people who have opinions on this type of novelty.

SH: I recall that the Wynn Las Vegas would put these out for entertainment purposes. What do you think is still holding Nevada back at this point?

JA: Probably not much now that it’s been released in New Jersey. One thing about regulators in Nevada, they were always open to me and the guys who went them and said, “Hey, these are some of the things we’d like to do.” They would just ask us, “Could you tell us more about it? How are those results are compiled?” Those types of things. And if you could lay it out for them, they would normally give you a chance if you thought you were at a competitive disadvantage.

So I would think that Nevada is probably going to move forward on a lot of things because New Jersey has been very aggressive in the market. You know allowing us, we had Super Bowl props on Gatorade this year, we had players to retire. So we’ve been able to do a lot of things Nevada has never been able to do.

SH: As for more new things in entertainment wagering…. do you think we might see in New Jersey other offerings that would attract interest, for example, the outcome for Game of Thrones?

JA: I think we’ll do some things. We have to be careful on the outcome of Game of Thrones, but it’s a possibility. Because some of that stuff is filmed ahead of time, some people know the answers to it. Same goes for the show like The Bachelor, but I could see some opportunities in the areas of Emmy’s, Tony’s, Grammy’s, you know possibly a Dancing with the Stars or American Idol, those types of things, where we all know the results at the same time.

I’m not saying the Game of Thrones couldn’t happen, but it’s something where it’s been filmed already, it’s in the can and some people know those actual results.

JA: Just that I’m pretty excited about being able to watch the movies this year having a little interest. Well, I’ve always had an emotional interest, and this year we’ll have a monetary interest. So, it’s going to be a different kind of viewing experience for me. And, well, it’s going to be a different viewing experience for everyone since we have no host.

SH: True, it may be kind of odd or awkward.

JA: I don’t know what the organizers have planned to open the show and keep this thing moving through the night. So, it’s going to be different in many ways I guess.

SH: Maybe we see Billy Crystal get a call from the bullpen at the very last minute.