Despite opening of new office, DraftKings has no timetable for applying for Nevada sportsbook license 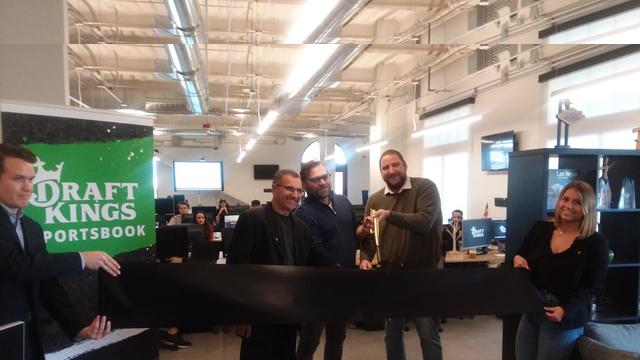 Less than a month after DraftKings announced a unique tri-merger that could lead to its public listing later this year, the company is expanding operations on the West Coast.

DraftKings opened a new, near-300 employee office adjacent to the Las Vegas Strip on Jan. 15, at a location within walking distance to Allegiant Stadium, the Raiders’ new home venue. The new office will contain teams of DraftKings employees dedicated to customer experience, fraud, iGaming, human resources and IT among other segments of its business, the company said in a statement.

DraftKings North America Co-Founder and President Matt Kalish took part in a ribbon cutting ceremony at the office inside Town Square Las Vegas, along with sportsbook director Johnny Avello. For now, there are about 70 DraftKings employees working at the new office, a figure that could increase to about 300 before year’s end.

“This new space exemplifies our continued investment in the success of our company and employees as we establish our technological prowess within one of the world’s top entertainment destinations,” Kalish said.

Scouring the Vegas market for talent

Over the last year, DraftKings has received approximately 45,000 applicants to join the company, Kalish added. The office will become DraftKings second-largest nationwide behind the company’s global headquarters in Boston, which recently underwent a 20,000 square foot expansion.

“The funnel of amazing talent is there for us, especially when we’re able to come to Vegas and tap into the type of talent that isn’t available in Boston,” Kalish said.

From an operational standpoint, there are numerous benefits for DraftKings to open an office just off the Strip. Avello, the former executive director of Wynn Las Vegas’ race and sportsbook, brought a member of the Wynn risk management team with him to DraftKings. Another former trader from William Hill US has joined Avello’s team. Avello was able to add the traders with experience in sophisticated risk-management skills from his own backyard.

Last month, DraftKings entered into a definitive business combination agreement with Diamond Eagle Acquisition Corp., a special purpose acquisition company and tech/software supplier SBTech on Dec. 23. Upon the completion of the deal, the new company, DraftKings Inc. will reincorporate in Nevada, according to a Jan. 6 SEC filing.

Despite DraftKings’ plans for the expansion of its workforce in Las Vegas, the timeline for when the company plans to enter the Nevada sports betting market remains unclear.

As of Jan. 14, DraftKings had not begun the process of applying for a sportsbook license in Nevada, a spokesperson from the Nevada Gaming Control Board told Sports Handle.

Complicating matters is Eldorado Resorts’ pending takeover of Caesars Entertainment. On Thursday, Eldorado cleared a hurdle when the Louisiana Gaming Control Board approved the $17.3 billion acquisition. Although the deal is expected to be completed by the first half of 2020, the transaction still requires approval from several other state regulatory agencies.

In addition, Eldorado completed a deal last January under which it acquired a 20 percent equity stake in William Hill’s U.S. subsidiary. The recent transactions have fueled speculation that William Hill US could eventually replace Caesars’ sportsbook operations at a number of properties throughout the nation.

Had DraftKings obtained a sports betting license in Nevada, the company may have emerged as a candidate to acquire the retail sportsbook properties owned by CG Technology, the operator of nearly a dozen sportsbooks in Las Vegas. As it turns out, William Hill announced the purchase of CG Technology’s sportsbook assets in November in a transaction where it acquired the leases of sportsbook properties at The Cosmopolitan of Las Vegas, The Venetian and The Palazzo, The Palms, the Tropicana and Silverton.

Nevada gaming regulations require on-premise signups from sportsbook customers, unlike stipulations in New Jersey that allow bettors to open an account remotely. Without a retail location in Nevada, DraftKings did not have a pathway for launching its mobile sports betting app across the state.

“We never had an urgency to get a license because we didn’t have a way for consumers to get access to the product,” Kalish said. “We need to solve that.”

When asked Wednesday if DraftKings will look to open a Nevada retail sportsbook through the Caesars agreement, Kalish indicated that pursuing those type of real estate transactions is not part of his job duties. Kalish, however, did not rule it out as a pathway for entering the Nevada sports betting market.

At the moment, DraftKings also does not offer its Daily Fantasy Sports (DFS) products in Nevada. DraftKings also needs to obtain a Nevada license in order to offer DFS contests in Las Vegas and the rest of the state.

DraftKings is expected to launch its highly anticipated IPO at some point this year.