by Andy Means
in Features 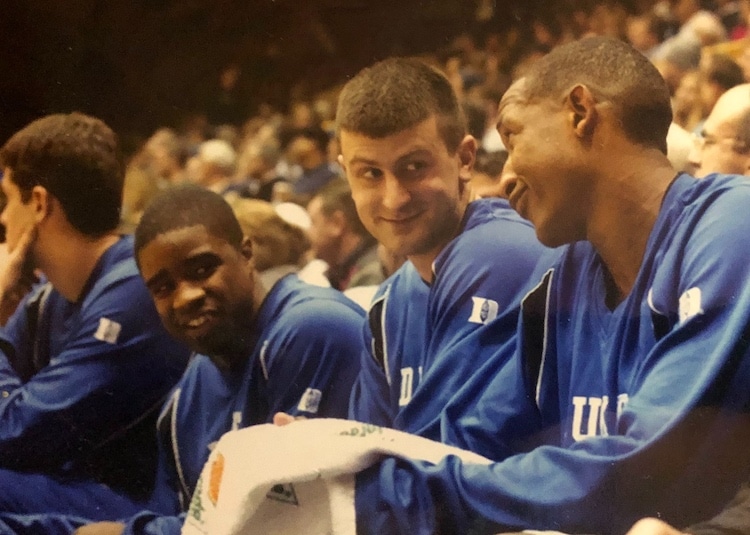 If, on the night of April 3, 2004, you asked me what the relevance of that date would mean for years to come, my answer probably would have been somewhere in, the ballpark of “the night my opportunity to get a national championship ring came to a screeching halt.”

I was a freshman that year, and despite rooming with the two scholarship freshmen (Chris Duhon and Andre Sweet), I was not a member of the team. So while it was awesome being a Duke student during one of the seasons we won it all, it still stings a little, even to this day, knowing I missed out on a title.

So yeah, one would think that losing to UConn in the Final Four of my senior year would leave a lasting mark.  And don’t get me wrong, it absolutely has. But when scores of people in the 16 years since that night brings up the exact same story, your overall impression of the night tends to gradually change. So if you ask me now what the relevance of that April 3, 2004, date is, my answer is instinctively:  “The night Chris Duhon made a meaningless half court shot at the buzzer to swing millions of wagered dollars.”

As I mentioned above, I roomed with Duhon my freshman year, but I also lived with him my junior year as well as his rookie year with the Chicago Bulls. When I’d interact with people in all walks of life, the fact that I played basketball at Duke almost inevitably would come up one way or another. Once the obligatory “What was it like playing for Coach K?” question was asked, said person would then proceed to ask: So who were some of the guys you played with?

Since Duhon was my roommate for many years and still one of my closer friends to this day, I’d always start with him. I’d usually be about two or three more players in before I’d be interrupted by the person saying, “Wasn’t Duhon the one who hit that shot against UConn?” It almost never failed! In all seriousness, I’d say at least 90% of people I talk to about my time at Duke and living with Chris ultimately bring up that shot.

It’s funny, because I don’t recall a single one of them saying, “Man, that won me so much money.” I doubt any of them even wagered on the game, but they still just … knew.  That’s how big of a deal it was.

From my own perspective, I remember very little about that game or the events surrounding it. I sure as hell didn’t know that we were +1.5, according to the Vegas odds, as I didn’t even start considering betting on sports until a year or two after I graduated. I haven’t rewatched that game to this date and haven’t even watched a clip of Duhon’s shot either.

All I remember is that we had a big enough lead with a few minutes left that I vividly can recall thinking, “Man, we are going to play for a national championship on Monday.” And before I knew it, we had given the game away and needed that meaningless half-court shot just to say we lost by one possession.

I don’t even know if I ever talked to Chris about that shot after it happened, whether later that night, later that week, or all of the years since.

That is, until I had him on my podcast recently. I knew I wanted to bring it up. I mean, if all of these people have been bringing it up to me all of these years, can you imagine how many times he has been asked about it?! The people still want to know about it, even 16 years later.

And to say I learned something new when I asked him about it on the pod is an understatement. I’ll let you listen for yourself to exactly what he said, but it’s safe to say that the world was quite aware of the magnitude as soon as it happened!

For those of you who did bet on UConn that night, I guess all I have to say is: That’s what you get for betting against Duke!

Andy Means was a walk-on with the Duke University basketball team for three years before graduating in 2004. He has a Masters in Accounting from the Indiana University Kelley School of Business and has been playing DFS since 2014 – professionally since 2016. He is a featured contributor for RotoGrinders, displaying his extensive basketball knowledge as the lead host of the top premium show – NBA Crunch Time. He also hosts the Means Streets podcast.