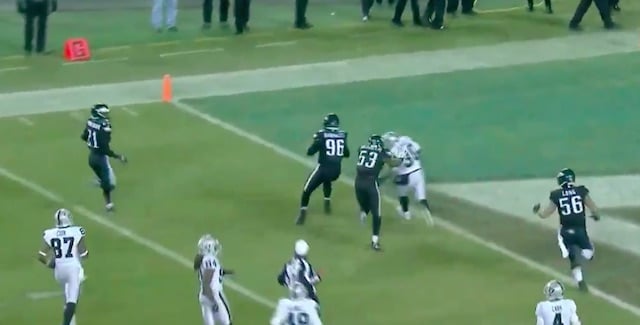 It happened again. As in the Redskins-Chiefs Week 4 game (spread flipped) and the Buccaneers-Dolphins contest in Week 11 (total flipped), a game-ending defensive touchdown in Raiders-Eagles on Monday Night Football had no impact on the game’s win-loss outcome — but major implications for sports bettors.

The headline references disaster, triumph and horror because the spread varied throughout the week leading up the game, bouncing from 8 at some shops to a closing number of 10 at the Las Vegas sportsbooks that we track. At the time that I published my Week 16 column (results of which were less than great this week), the Las Vegas consensus line was 9.

So, on the final play of the game during regulation, the Raiders trailed 13-10 at their own 36-yard-line with just three seconds to go. As in Redskins-Chiefs that ended with a Chiefs defensive TD that gave the big home favorite a win, the Eagles scooped an errant Raiders lateral and defensive end Derek Barnett took it to the house for a touchdown giving Philly a 19-10 lead.

That’s when things got really interesting. Even though the game’s winner-loser result was decided, NFL rules dictate the scoring team must run a play: an extra point try, a two-point conversion try, whatever. A play from scrimmage. Well, here’s a look at what the box score reflects as a failed two-point conversation try. Victory formation and a kneel down: 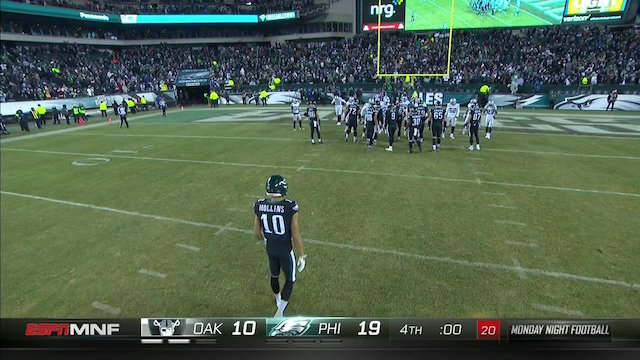 When the Eagles lined up minus kicker Jake Elliott, the writing was on the wall: They weren’t really going to kick or go for two.

Here are the varying results, for sports bettors, of this unusual game finish:

I may be missing an outcome but those are the seven I count.

Yet another reminder: Never count your winnings or rip up your ticket until a tackle is made on the wacky lateral play.