Ohio-based sports bettors can join FanDuel Sportsbook to cash in on an easy $100! 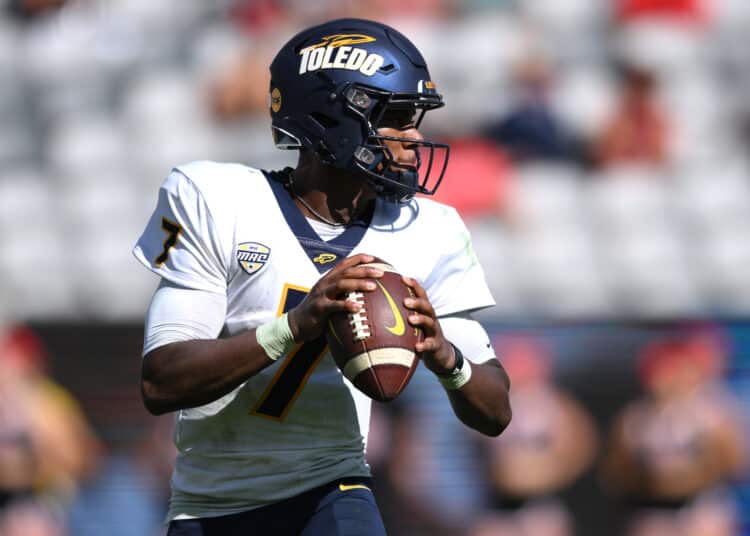 November is here, and that means MACtion is in full swing!

In last week’s opening lineup, in the most MACtion fashion, three of the four games resulted in the underdog winning outright, with Bowling Green as the lone favorite to come out on top. We’re in for another treat this week as we get three games on Tuesday and Wednesday night each.

And tonight’s action, we go to The Heart of It All State! Although online sports betting is not yet legal in the Buckeye State, FanDuel Sportsbook is coming to Ohio in 2023!

With the state’s sports betting operations set to launch on January 1, 2023, FanDuel is ready to go for its Ohio-based users. And even though the betting doesn’t begin for a couple of months, that doesn’t mean Ohio residents can’t have some fun in the meantime.

Sign up now on FanDuel Sportsbook using this link, and you will have $100 in free bets waiting for you in your sportsbook account as soon as FanDuel opens! It’s that easy. Once your account opens, you will have 30 days to wager your free bets before they expire.

No FanDuel promo code is required for this offer.

But wait, there’s more! Additionally, on top of your $100 welcome bonus, new players will also qualify for the standard FanDuel welcome offer, which is currently the $1K No Sweat First Bet.

Be sure to jump on this juicy offer while you still can. Between now and January 1, this is an easy touchdown for all Ohio residents.

Below, we will preview the MACtion slate of games tonight, which reside in Akron, Miami (OH), and Toledo. In addition, we will go over the terms and conditions of FanDuel’s No Sweat First Offer for users who are in active FanDuel states.

Week 2 of mid-week MACtion is here! Even though sports betting is not yet legal in Ohio, there’s still loads of great football on tap for this Tuesday night with plenty of MAC championship implications. Let’s jump into it.

We head to Akron for the first game of this evening, where the Zips will take on a pesky Eastern Michigan squad. With a win tonight, the Eagles will become bowl eligible for the fourth time in the last five seasons under head coach Chris Creighton.

Eastern Michigan had an impressive out-of-conference performance, including a big-time win over Arizona State, which led to the firing of their head coach. But the in-conference results haven’t been as inspiring. Eastern Michigan has lost decisively in two of their three MAC losses and is coming off a 27-24 defeat against Toledo, where the Rockets scored ten unanswered points in the fourth quarter to escape with a win.

However, they should have an excellent opportunity to bounce back tonight against a 1-8 Zips team.

Now, don’t be fooled by their record – Akron has been close to breaking through, having been competitive in several MAC games. In new head coach Joe Moorhead’s first season, Akron has lost by 3 to Bowling Green, 7 to Central Michigan, and 6 to Kent State.

Dual-threat quarterback DJ Irons has been arguably the Zips’ best player, averaging 279 yards through the air per contest. However, it has been the ground game that has led to this offense’s demise. The Zips are currently second to last in all of FBS in rushing offense, with their leading rusher, Cam Wiley, averaging a lowly 26 yards per game.

If the Zips want to win their second game of the season tonight, they will need to establish more of a presence on the ground than they have up to this point.

In the potential game of the night, Ohio University is traveling to Miami of Ohio, to take on the Redhawks.

Miami (OH) was the preseason favorite to come out of the MAC East, but expectations for this season completely changed when preseason All-MAC quarterback Brett Gabbert suffered an injury in their season opener against Kentucky.

Gabbert has since returned to the lineup for the last two weeks, with the Redhawks going .500 in that stretch. Can the return of their quarterback rejuvenate an upset this Tuesday night against a scorching-hot Bobcats squad?

Ohio has beaten four straight MAC opponents, having won three of them by three possessions. In addition to this dominance, bettors have profited nicely off the Bobcats as they’ve covered in all five MAC games. Before the season, Ohio possessed 16 to 1 odds to win the MAC, but with a win tonight, they will be in the driver’s seat to make an appearance at Ford Field for a conference title.

The offense has been electric behind junior quarterback Kurtis Rourke, but the defense allows 31 points per game. Can the defense contain Gabbert, who is 11-1 in Oxford for his career, on their way to a potential MAC East title?

For tonight’s finale, we go to Toledo for another crucial game for MAC championship implications. Toledo and Ball State are currently the top two teams on the MAC West side, and with a win tonight, the victor will certainly be in the driver’s seat for the remainder of the regular season.

After a tough loss to Georgia Southern in non-conference play, Ball State has won four of their last five, including a surprising upset win at Kent State during last week’s MACtion slate. But they will have an even tougher task tonight against a Rockets squad that is undefeated at home.

Toledo has been dominant in conference play, with their lone loss coming against Buffalo in a one-possession game, where they committed six turnovers. However, there’s some skepticism tonight as Toledo had to ride with backup Tucker Gleason in a come-from-behind win against Eastern Michigan two weeks ago.

Coming off a much-needed bye, star quarterback Dequan Finn’s status is still in the air for tonight’s showdown.

It’s all about Ohio tonight as we reside in Akron, Miami (OH), and Toledo for each of the three MACtion games.

But for FanDuel sports bettors outside the state of Ohio, you are in luck! For bettors who are in an active state, FanDuel Sportsbook is offering new users a No Sweat First Bet of up to $1,000 for Tuesday MACtion! All you need to do is click this link to join one of the best sports betting sites with one of the best welcome offers in the business.

And lucky for you, no promo code is required! It doesn’t get much better than this.