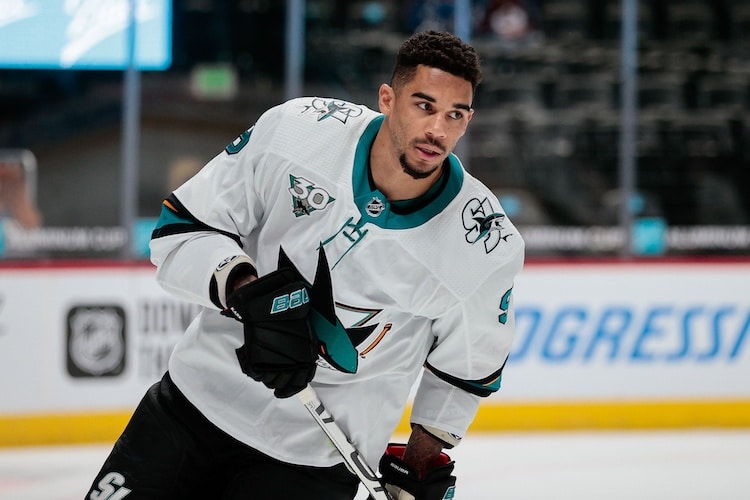 While the NHL investigates the gambling allegations against San Jose Sharks winger Evander Kane, now would probably be a good time for the league — actually, all leagues — to investigate their own gambling policies and to take a gander at how they handle the matter of betting on sports amongst their players, coaches, and personnel.

In very broad strokes, the NHL, MLB, NBA, PGA, and NFL all have pretty much the same policy: Don’t bet on your own sport, don’t bet with an illegal bookmaker, and don’t you dare bet on or against your team or give out actionable information. And that’s pretty much it. Sure, there are variations on the theme, but overall, that’s the message.

And in the Old Times — you know, pre-PASPA — this was probably good enough. Betting on sports involved physically being in Las Vegas, and if you wanted to do it illegally, it meant doing it offshore or with a bookie. Channels to get down a wager were limited and required a bit more effort to cross.

Today, though? Well, as we all well know, sports betting has exploded post-PASPA, with 22 states (including Washington, D.C.) up and running in some fashion, another 10 states where it’s legalized and awaiting further action by regulators and/or legislatures, and 10 others where it’s possible or likely that legislative action will happen this or next year.

Legalized sports betting is real, and it’s spectacular. And with it comes even more temptation. Today, athletes are just like us: All you need to do is download an app and you’re able to place a bet.

99 problems and integrity is number one

OK, it’s obviously too soon to make any rash judgments or determinations about the Kane situation. Let’s just go ahead and presume he’s innocent. Or let’s presume he’s guilty. It doesn’t matter, really. Why? Because either way, it shines a white-hot light on the intersection of legalized sports betting and the temptation athletes — who are still human, last I checked — face.

To be clear: I am not, in any way, saying Kane is guilty of what his estranged wife accused him of via Instagram, namely, doing his best to throw games last year as a member of the San Jose Sharks (even though it’s near-impossible for a winger to throw a game all by his lonesome). I obviously have no idea if he’s guilty or innocent. That’s up to the NHL to figure out. But obviously, if the allegations do check out, it’s the biggest sports gambling scandal post-PASPA.

But again: It almost doesn’t matter. This woeful tale should serve as a screaming klaxon warning to not only the players of America’s sports, but also the leagues.

Every commissioner always says the same thing when it comes to sports betting: The integrity of the league is paramount. And while that has become a cliche, it doesn’t make it any less true. A post-PASPA betting scandal of the kind under investigation here would be disastrous not only for the league where it happens, but also for the sports betting world at large.

.@BradMcElhinny joins @HoppyKercheval with the latest on legal sports betting in WV and the status of an “integrity fee.” WATCH: https://t.co/wkudfIAoe1 pic.twitter.com/drkP4bLPej

And now that the leagues are in bed — and tucked in, and snuggling — with the sportsbook operators, it’s clearly time for enhanced rules and regulations concerning what an athlete can and cannot do when it comes to sports betting.

And at the risk of completely Karen-ing out here, allow me to make a trio of modest proposals.

All the major sports leagues prohibit players from betting on games in their own sport. This was highlighted back in 2019 when Arizona Cardinals defensive back Josh Shaw became the first NFL player to be suspended from the league for gambling in over two decades.

He placed bets on NFL action at Caesars in Las Vegas while he was out with an injury. It’s possible he had no idea he was breaking league rules, as he put “professional football player” as his form of employment when he was filling out his Caesars account.

But here’s the rub: Each of the major pro U.S. leagues allow players to wager on other leagues’ games. So Shaw could’ve bet on the NHL or the MLB or any other sport, and all would have been OK.

Call me crazy, but this seems like a prudent example of how pro players across all sports should behave. If you don’t bet on sports, you don’t risk finding yourself in a Kane-like — or worse — situation.

This may just reek of common sense, but really: There is zero reason for pro athletes to be betting on games. Play poker or something. Or just do this:

As for fantasy sports? Again, I’ll look to the NFL for guidance. They allow their players and personnel to play traditional, season-long fantasy sports — including football — so long as they can’t win more than $250 in prizes.

So there’s modest proposal number one, the nuclear option: No sports betting, period. No betting through friends, through proxies, anything. You want to bet on pro athletes? Stop being a pro athlete. You want to play in a little home fantasy league? Go right ahead.

Of course, we’d need penalties here. Bet on a sport that’s not yours, a season-long ban. Bet on your sport, two seasons. Bet on your team? Goodbye, so long, farewell.

If a blanket ban is too strict, then perhaps there should be maximum amounts players are allowed to wager on any one game, one sport, or a dollar amount over the course of a year. It could be a reasonable number based on a player’s salary, perhaps, or more easily just a flat dollar amount for everyone.

If you’re making $8 million a year and may only bet $15,000 (or perhaps deposit that amount) over the course of the year, the only reason to actually go ahead and make a wager is for the fun of it. The profit motive just isn’t there.

Of course, this idea has some holes in it, namely someone having to do the work of keeping tabs on the players and their bets all year long. And there’s obviously the possibility of a player finding someone to place the bets on his or her behalf.

But perhaps the bigger issue is that both an outright ban or a limit scenario is basically prohibition in one form or another, and prohibition is rarely a successful strategy when dealing with any vice. Last I checked, there are still plenty of illegal ways to get money down on games. In fact, Kane, who filed for bankruptcy earlier this year, noted he lost over $1.5 million, in part, “via bookie.” It’s unclear how exactly Kane was getting his money down and whether or not it was through legal sportsbooks.

The filing detailed liabilities of $26.8 million, assets of $10.2 million and the note that he may terminate his contract and opt out of the season given the recent birth of his first child. pic.twitter.com/FRtqbcvvzy

Penalties for going over your betting limit? Again, suspensions would have to be on the table, and obviously, the punishment for betting on your own sport or team would be significantly higher.

But if prohibition, limited or whole, might be a bridge too far, is there another way? I got one more coming.

Each league has their own way of doing things, but they all employ what amounts to an internal investigations department. One assumes these folks exist to protect the integrity of the game. These are not pencil-pushers; these are usually ex-police officers and detectives who are tasked with making sure everything is on the up and up, from performance-enhancing drugs to player misconduct to, yep, gambling.

If banning gambling or limiting the amounts of money a player can wager is too much, then how about all the leagues pool resources to not only create a central investigative unit, but also ensure that all wagers made by players and team personnel go through the same place? (Oh, and referees as well. The Tim Donaghy scandal is still only a couple exits in the rearview mirror for the NBA, which only found out about the fact Donaghy was actively calling games to affect the point spread due to a broader FBI investigation into organized crime.)

Basically, every wager by anyone, players and personnel, either gets made by proxy by the office or, at minimum, gets reported to the office. Sure, this may look like bureaucracy run amok, but at least there would be a central repository of all wagers players made across all sports. While this information would not need to be made publicly available — although, boy howdy, would that be fun — it would at least create transparency across all the leagues so that they would know who’s betting what, when, and where.

The beauty of this is that it would bring everything above water. If a player bet outside the system, punishments would have to be severe, no matter if they’re betting on their own sport or not. If an NFL player wants to bet an entire game check, they can go right ahead, provided they make their bets known (or through) the central office.

In the end, the NHL — and by extension, all of the American sports world — will have a major problem if the allegations against Kane (which he strongly denies) prove to be true. It will, without question, create a lot of hand wringing in the mainstream media, as this would be the biggest American sports gambling scandal since Pete Rose — who, almost quaintly, simply bet on his own team to win — and it would be coming only three short years after the sports betting floodgates opened.

The integrity of the game is paramount, right? That’s what every commissioner always says when it comes to sports betting. So now that sports betting is mainstream and almost literally everywhere, let’s put much stricter rules into place to not only protect the leagues, but the players as well. Oh, and by extension, us gamblers.