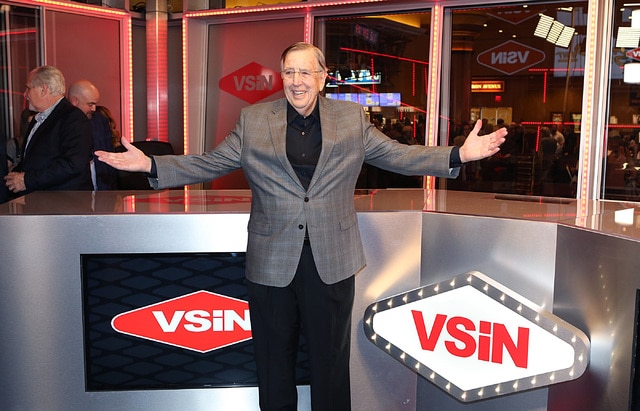 Brent Musburger is apparently the new radio voice of the Oakland Raiders. However, a spokesperson for the Vegas Stats & Information Network (VSiN) has declined, in an e-mail and telephone conversation with Sports Handle, to confirm or deny their afternoon host and managing editor’s new position.

It’s believed Musburger’s VSiN program, “My Guys in the Desert” would continue with the veteran sports personality as host, even if he accepts the new job.

The Las Vegas Review-Journal citing unnamed sources says the 79-year-old Hall-of-Fame broadcaster will replace longtime Raider radio voice Greg Papa. The Raiders are expected to relocate in Las Vegas in time for the 2020 NFL season. A new $1.9 billion stadium for the team near the Las Vegas Strip is currently about 15 percent complete, but is expected to be ready in time for the move.

Industry observers speculate the delay in a formal announcement could be the result of the possibility of the NFL’s need to examine the specifics of Musburger’s deal with the team. In his prominent role at VSiN, Musburger is now a major advocate of the growing business of sports betting.

The NFL has laid out its “core principles” on the expanding enterprise of sports wagering now underway thanks to the U.S. Supreme Court ruling in May, which overturned the federal law essentially banning Nevada-style sports betting in the other 49 states. The league calls for consumer protections, for protections of its intellectual property, and would prefer a federal framework for sports betting, as opposed to regulation by the separate states. The league’s longstanding policy prohibiting players and team employees from wagering on its contests is unlikely to change.

With respect to Musburger and the NFL Compliance Plan — consider the third and sixth bullets from the document dated January 2018 and signed by Commissioner Roger Goodell:

Compass Media Networks has exclusively managed the Oakland Raiders’ radio broadcast rights since 2010. It’s unclear if Musburger would face any restrictions in terms of real or perceived gambling content in his new role or even if he could cross promote or advertise the Raiders’ games on VSiN and the VSiN broadcasts and products, such as its newsletter, during the Raiders’ broadcasts.

VSiN, which began operations in February 2017, is not a gambling site. Its stated mission when founded by Musburger’s brother, Todd Musburger and his son Brian Musburger, is to provide “actionable” information for prospective bettors. It is located at the South Point Hotel Casino Spa in Las Vegas and provides its information via video and voice streaming and over the Sirius/XM satellite radio network.