by Gary Rotstein
in Promotions 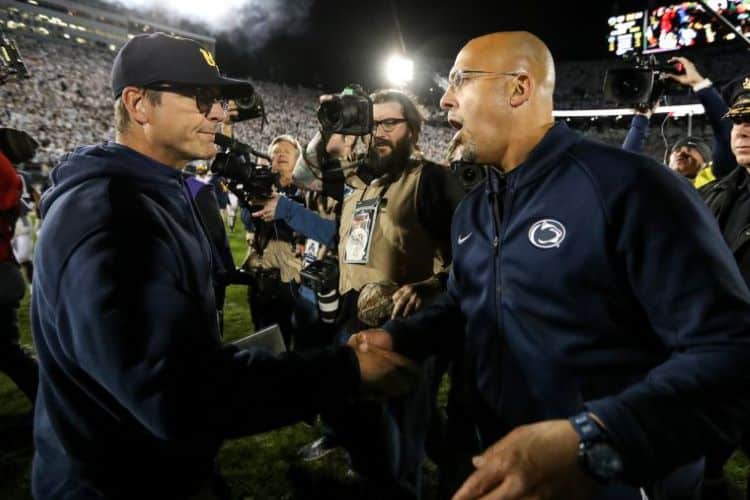 There’s no shortage of interest surrounding Saturday’s Penn State vs. Michigan matchup that will feature two undefeated, Top 10 college football teams; 100,000-plus attendees in Ann Arbor; a national television audience; and the winner laying rightful claim as top threat to Ohio State in the Big Ten.

There’s also bound to be plenty of betting interest in the noon contest considering the status of the two schools’ programs both this year and historically. That’s where FanDuel Sportsbook delivers with a big incentive for new customers who have never used the sportsbook before. It is offering them a Bet $5, Get $150 Free offer.

FanDuel is a national leader among online sportsbooks for its sites and offerings, and the special promotion outlined below makes it just that much more attractive to use currently.

To utilize this welcome offer, no FanDuel promo code is required. Instead, use this link before signing up on FanDuel Sportsbook.

It’s important to note that free bets only pay out the winnings on any wagers, never the initial stake (like when you wager with real cash). Customers also need to be sure to use the free bets within 14 days of issuance, or they will expire.

Users must be at least 21 years old to play on FanDuel Sportsbook. In addition, players must be located in one of the following states:

Mobile wagers do qualify for this FanDuel Sportsbook promotion.

Now, about the game.

Michigan is 6-0 after pasting Indiana 31-10 last Saturday, and Penn State is 5-0 after its bye week, but neither has played a stiff schedule. The game marks the first this year for either squad against a top-tier opponent. “Big, big, big, game,” Wolverines coach Jim Harbaugh calls it, just in case anyone was unaware.

Michigan and Ohio State (ranked second nationally) are both 3-0 in the Big Ten East, with Penn State 2-0, so the game’s consequences for postseason play by the Wolverines and Nittany Lions couldn’t be any bigger.

It will be the eighth meeting between Harbaugh and James Franklin in their tenures at the two longtime powerhouses, with Harbaugh’s teams holding a 4-3 edge. Michigan won 21-17 in State College last year, but the last time Michigan suffered a home loss of its own was against Penn State, 27-17, in November 2020.

For this game, FanDuel listed the Wolverines as of Thursday as a 6.5-point favorite, but with extra vig of -120 to get them at that number. Penn State backers only need to lay -102. Michigan is -280 on the moneyline and Penn State is +225.

For the points total of 51.5, FanDuel was favoring the under, where it required -115 juice as opposed to -105 for those betting the over.

Both defenses are strong, with Michigan fifth nationally in both yards and points allowed per game (11.3). Penn State is fifth in the NCAA in rushing defense (79.6 yards per game), has forced 11 takeaways in its last three games, and has held quarterbacks to a 49.6% completion percentage.

That last stat is intriguing in that Wolverines QB JJ McCarthy has led the nation by completing 94 of 120 passes, including nine TDs against one interception. The Wolverines hardly are dependent on his passing, however, as Blake Corum ranks seventh nationally in rushing and has exceeded 120 yards in all three of Michigan’s Big Ten games.

The Nittany Lions have found similar offensive balance to supplement longtime quarterback Sean Clifford by splitting backfield time between the sensational freshmen duo of Kaytron Allen and Nicholas Singleton, who have combined for 766 yards and eight TDs to compare to Corum’s 735 yards and 11 scores.

It all adds up to a game that could be exciting and close, whether for watching or betting. For newcomers, FanDuel’s offer could make it that much more interesting.