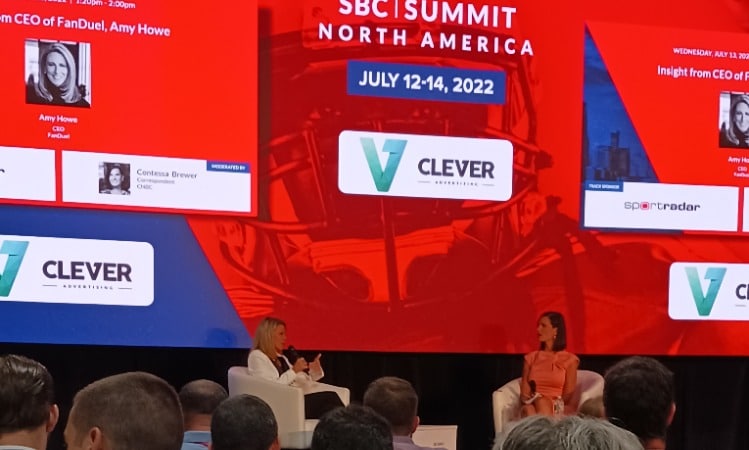 News that inflation rose by 9.1% — the largest increase in 40 years — drew obvious concern from FanDuel CEO Amy Howe, who shared her thoughts about the economy and sports betting during a half-hour interview with CNBC’s Contessa Brewer at the SBC Summit North America on Wednesday afternoon.

From Howe’s standpoint, the economy’s current state may not have as much impact on the sports betting industry as one might think.

“There’s no doubt that the market is not working right now,” Howe said. “The way we look at it, even if the market was working, there was going to be some form of consolidation.”

Howe, who was named FanDuel’s CEO last July, thinks that “12 to 15” operators would be a challenge to sustain in any economy. So, she expects that there will be some consolidating of sportsbooks down the road.

Heading in the right direction

Howe likes the direction that her company is heading in, noting that FanDuel currently has 26 retail sportsbook locations. For the alway’s up-to-date count, read our comprehensive FanDuel online sportsbook review At a time when there’s talk of consolidating operators, Howe hopes to see her company continue to grow.

Howe’s career background was not in the sports betting or gambling industries. She served as TicketMaster president and COO in her previous position. Howe said she didn’t run into any resistance from others when she was named FanDuel’s first female CEO. She credited having a “good team” already in place at FanDuel.

That doesn’t mean Howe accepted the position thinking that FanDuel didn’t need to make any changes.

In general, Howe wants to see more diversity in the sports betting industry. She said there’s space for more women working in the business and that the market for women wagering on sports also has room for growth. Howe added that she thinks the industry would benefit from it showing more support for female athletes.

Among other subjects, Howe said she thinks that operators like FanDuel should not be involved in collegiate sports to the level that their logos are advertised on college uniforms. Even with student-athletes permitted to receive NIL payments, Howe, a mother of three boys, thinks college athletes still shouldn’t be treated like professionals. She noted that the Calvin Ridley incident raises some cause for concern when it comes to athletes and sports betting.

A California resident, Howe is cautiously optimistic about passage there in November of Proposition 27 — a ballot initiative, supported by FanDuel and DraftKings, that would legalize mobile sports wagering in the Golden State. She also thinks the iGaming industry has plenty of room for growth in the U.S., since it’s only legal in a handful of states.