Was FanDuel’s Half-Million Dollar Parlay Winner A Kid? No, But … 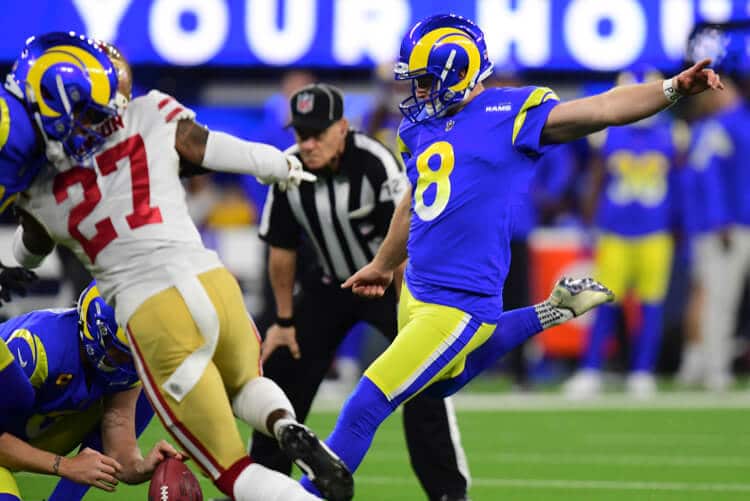 Sportsbooks are fond of highlighting big parlay wins on Twitter. And why shouldn’t they be fond of it? It’s basically the best form of free advertising: “Look here, rubes! You too can win hundreds of thousands of dollars by placing insane longshot bets, never mind the fact we profit by like 30% on your silly parlay bets compared to about 6% on straight bets!”

Yep. Parlays are cash cows for the mobile sportsbooks, and the constant, daily barrage of showing us the “big winners” is certainly an effective way to get us to try and do the same.

But late Sunday night, in its rush to highlight the latest big win, FanDuel got itself a little twisted up.

It’s about the most improbable bet that’s ever been won: Someone put $20 down — a $20 site credit, no less —  on a parlay picking the correct, exact score of both the AFC and NFC Championship Games Sunday.

The most 𝗜𝗡𝗦𝗔𝗡𝗘 parlay you'll ever see, guaranteed.

Confirmed by FanDuel, the winning ticket was first posted on the Instagram page of jetthonig_ (which FanDuel retweeted above), a page that has since been more or less locked from public viewing by the owner of the page. But as of Monday at 2:00 p.m. ET, the profile included the following five-second Instagram story showing the eventual half-a-million-dollar winning ticket and the caption “Tuff,” on a backdrop showing Bleacher Report and br_betting’s tweet about the bonkers winner. 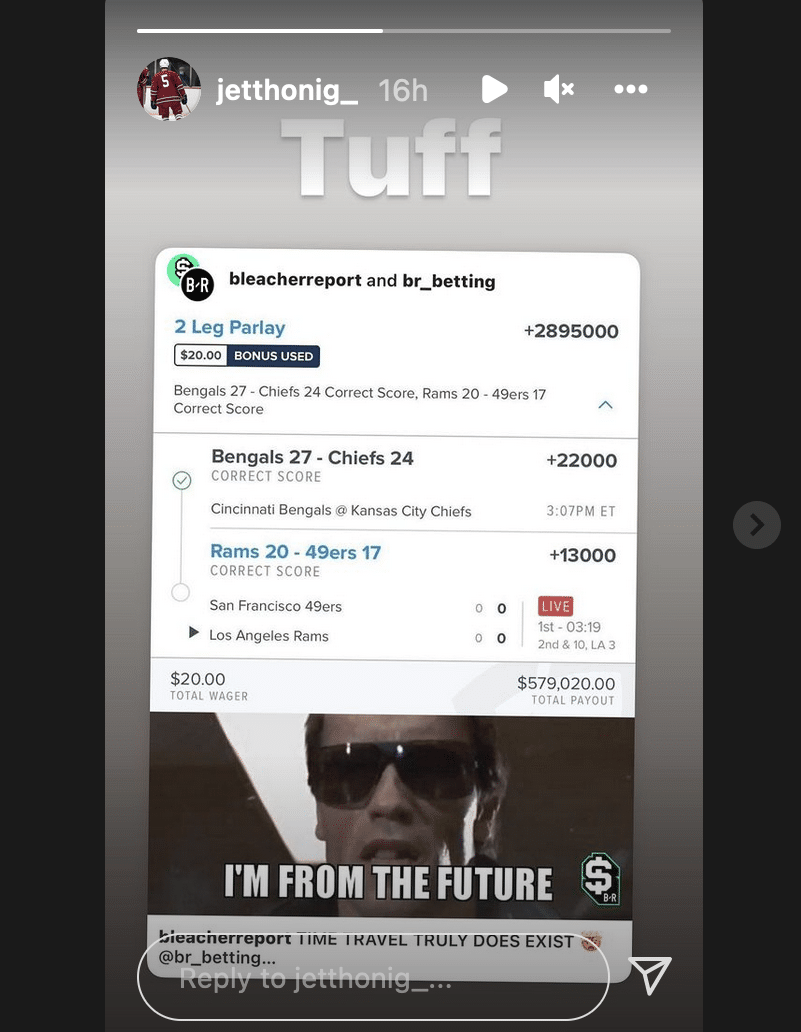 Gambling Twitter exploded with this legitimately insane winning ticket, and mainstream news media, including USA Today and the Sporting News, identified the winner of the bet as Jett Honig.

Only problem? Jett Honig appears to be a high school student, set to graduate in 2025. Records and rosters accessible through some light Google searching, Facebook queries, and all other Internet sleuthing led to the same conclusion: Jett Honig is a kid.

Of course, kids are not allowed to legally bet on football games.

This uncomfortable potential truth began circulating on Twitter. On the thread below, Crosscowboy10 was bragging about being friends with the eventual winner, and in the ensuing discussion, another user noted “Lmao ur friend is underage and already got found out by Fan dual. He ain’t seeing any of that money.”

Additionally, a video purportedly showing Honig and his friends celebrating the victory was making its way through the digital grapevine.

Circumstantial evidence was certainly … not great.

He told us the winner was not underage, and that the person who posted on Instagram is not the account holder, that the bet slip is legitimate and that the company is reviewing the wager.

Pressed further with some incredulity, Hennessy said, “I think this is more about social media beware. I can confirm the bet was legit and was paid out to a customer in Connecticut.”

Hennessy also said it is FanDuel’s policy to not release anything about their customers without their permission.

But by the end of the day, it certainly appeared the winning customer was comfortable releasing at least some information about himself.

“The Instagram account is the son of the FanDuel customer that actually placed the bet and won,” Hennessy wrote. “The IG account holder does not have a FD account and did not place the wager and any credit the IG account holder is taking can be chalked up to social media bluster and excitement from his father winning.”

So, congratulations, apparently, to the father on his massive NFL parlay win.

But really: FanDuel’s social media team should probably be a teensy bit more judicious when deciding to grab someone’s Instagram post or tweet and then retweet it from the official account. It took us one single Google search to find “Jett Honig.” This was not some Dark Web, deep search using websites that promise to “find arrest records.” Google the name, and who — and how old — Jett Honig is (full disclosure: awesome name, kid) pops up like a piece of toast.

Of course, Honig — or any other kid — wouldn’t be able to get an account with a regulated sportsbook. He could try to lie about his birthdate, but the Social Security number would (hopefully/obviously) shut the process down.

“This is huge. I can’t tell you how crazy this is. It’s rampant,” said a semi-professional gambler who has two college-age children. “From what I’ve seen — and maybe it’s just my kids’ circle — but so many kids I know are big sports bettors, and they’re all looking for the big hit. They’re not interested in sides; they’re trying to turn $10 into $10,000.”

He said he knows at least two dozen underage gamblers who use — with permission — accounts set up by their parents.

“How do you police that? It’s impossible,” he noted. “And most parents are naive and don’t realize the tax hit they’re going to take if their kid actually wins.”

This gambler won’t let his own kids use his accounts, but it’s not for any moral reason.

“My kids guilt me all the time, give me the ‘all my friends are doing it,’” he said. “But I’ve got millions of dollars in and out of DraftKings, I don’t need my kid hitting a $100,000 parlay and opening me up to whatever algorithm DraftKings is going to hit me with.”

His points are actually … well, spot on. While no one is sitting here wanting more underage kids to gamble, the policing of it in today’s digital world falls firmly on the parents’ shoulders, not the sportsbooks, if only because there is no way for FanDuel to actually know who is hitting “place bet” short of … what? Fingerprints? Facial recognition?

“As a society, we’re pretty aloof with this stuff,” the semi-pro bettor said. “There’s bigger things to worry about than a kid gambling on the Internet. We pick our spots.”

This reminded me of the Patriots-Eagles Super Bowl in 2018. I’m sitting on the couch, building Showdown lineups on FanDuel, and my son — who was 8 years old at the time — was sitting next to me and saw Tom Brady’s name. He was the only player he was aware of — and could easily read — so he said, “Play him.”

I then spent 30 seconds explaining how to build a lineup, and scrolled through the names — and pictures — and let my son pick the remainder of the team.

It came in third.

In the end, is the above any different from what might have happened Sunday?

The answer is, “um, yeah, kinda seems like a lot different,” but it does demonstrate the policing factor. There is no way for FanDuel to know that my 8-year-old nearly took down a GPP. It was a great father-son bonding experience, even though I had to throw him $50 to spend as he wished. (No way I was splitting it evenly with him.)

And in Sunday’s scenario, there’s really no way to know, or unequivocally prove, who placed the $20 bet. It was a crazy bet, it hit, the account holder is of age because the account holder has to be of age. What more is there to say, especially from FanDuel’s and the bettor’s point of view?

But there is one thing I’m pretty certain of: I promise you FanDuel is going to do a little more vetting when it comes to hyping these big wins on social media. That I’d bet on, and you don’t even have to give me +2895000 odds. Sportsbooks do not want any trouble about kids using their product, no matter how often it might actually be happening.