Max $25 bet on consensus favorite and Heisman Trophy winner to be No. 1 selection 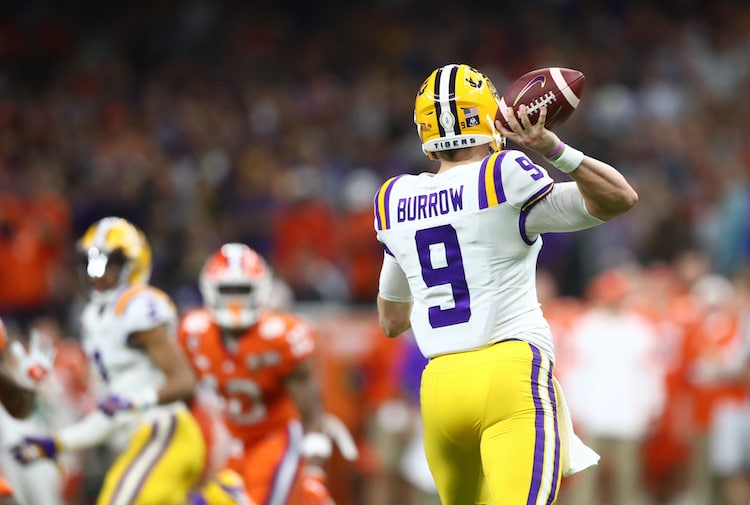 The NFL Draft is almost here to provide a brief but much-needed three-day return to some sports normalcy, as well as a betting menu highlighted by something other than Belarusian soccer. Or darts, or whatever.

To celebrate and encourage some new patrons home-bound in New Jersey and Indiana, FanDuel Sportsbook is running a special market on former LSU quarterback and Heisman Trophy winner Joe Burrow to be selected first overall in the NFL Draft on Thursday night. You can get it  at +200 odds.

An overwhelming favorite at –100000 (that’s $1,000 to win $1) to be the first name announced by commissioner Roger Goodell on Thursday night, Burrow is the consensus choice to be the top overall pick by the Cincinnati Bengals. First-time bettors who register with FanDuel can then place a maximum $25 first bet for Burrow to be picked first for a $50 payout.

Burrow is expected to be one of at least four quarterbacks taken in the first round, as former Oregon quarterback Justin Herbert, ex-Alabama signal-caller Tua Tagovailoa, and one-time Utah State QB Jordan Love are all expected to hear their names called Thursday night. Herbert and Tagovailoa are the only other quarterbacks receiving consideration for the No. 1 pick at +3500 and +3000, respectively.

The real intrigue likely will begin at the No. 3 overall pick, currently held by the Detroit Lions, as multiple teams could be jockeying to move up via trade to select one of the three aforementioned quarterbacks after Burrow. Former Ohio State edge rusher Chase Young is widely believed to be going to the Washington Redskins with the No. 2 pick.

By now, you may have heard (repeatedly) that this wide receiver class is arguably the deepest and the best in the history of the NFL Draft era, and there is plenty of truth to it. Ex-Oklahoma burner CeeDee Lamb and former Crimson Tide bookends Jerry Jeudy and Henry Ruggs are all expected to go in the top half of the first round, with Lamb and Jeudy a virtual toss-up at +110 to be the first wideout taken.

Beyond that trio, however, is a solid play in Brandon Aiyuk being offered at +118 as a first-round pick. The former Arizona State flanker had a standout season with 65 catches for 1,192 yards and eight touchdowns, seamlessly stepping into the No. 1 wide receiver role after predecessor N’Keal Harry was a first-round selection himself in 2019 by the New England Patriots.

That NFL pipeline matters, as does the fact he was coached by Herm Edwards — NFL lifer and former head coach of the New York Jets and Kansas City Chiefs. Edwards’ presence means a team drafting Aiyuk should be getting someone with an NFL-ready attitude. Aiyuk — who averaged an eye-popping 10 yards after the catch and owns a 6-foot-9 wingspan while just 6 feet tall — is part of that second tier of wideouts that includes Tee Higgins (Clemson) and Justin Jefferson (LSU), and he should be an attractive pick for teams looking to add a No. 2 or No. 3 receiver.

There are plenty of potential landing spots for Aiyuk, including Philadelphia (21st), Minnesota (22nd and 25th), New Orleans (24th), and Green Bay (30th). The Vikings in particular add to the attractiveness of this play given their two picks and void in the receiver corps after dealing Stefon Diggs to Buffalo.

The combination of quality depth at wide receiver and teams at the bottom end of the first round needing a plug-and-play wideout like Aiyuk makes this plus-money play a smart grab.