New customers can take advantage of the welcome offer from FanDuel 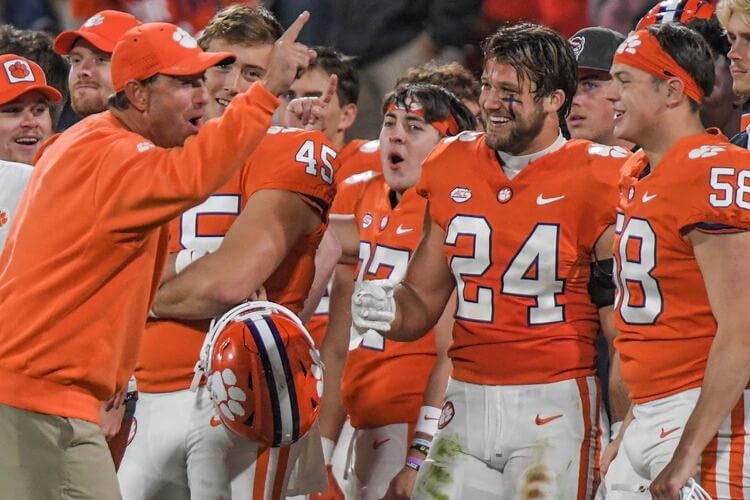 It’s Week 8 of the college football season, and we’re receiving word that … Syracuse is good? That’s the rumor anyway, and it’s hard to argue given the team’s 6-0 record and No. 14 ranking.

Saturday’s road clash against No. 5 Clemson is the Orange’s toughest test of the year, and it’s also one of the best games of the weekend. If you’re a new sports bettor eager to wager on the marquee ACC matchup, FanDuel has quite the welcome offer: A “No Sweat First Bet” up to $1,000.

To register for the promotion, you need to be a new FanDuel user and at least 21 years old. You also need to be in an active FanDuel state, which means new customers in New York can take advantage of the promotion.

Once you’ve finished the sign up process, you’ll need to make an initial deposit of $10 or more.

After funding your account, place a wager on any sports market or event listed on FanDuel Sportsbook. This could be the Syracuse-Clemson game, but it doesn’t have to be. You could always wager on the NBA, NHL, NFL, MLB, or another market.

If you lose the bet, don’t sweat it. FanDuel will cover it for you, matching the losses with free bet credits up to $1000. Be sure to use those free bets within 14 days, as the free bets expire after two weeks.

And remember, free bet credits only pay out the winnings, never the free bet’s original stake.

Is Syracuse for real?

Syracuse has been a fascinating program under head coach Dino Babers. The Orange are in their seventh season with Babers, and five of the first six were losing seasons. The lone outlier was a 10-win campaign in 2018.

This year, Syracuse is 6-0 and ranked 14th in the latest AP Top 25 poll. When Syracuse plays well under Babers, it plays exceptionally well.

Fun fact from Clemson's game notes for this week: It's the first time ever two undefeated teams 6-0 or better will meet in Death Valley in its 81-year history.

The Orange look competent on offense and defense this fall. They have Power Five wins over Louisville, Purdue, Virginia, and N.C. State. They’re bowl eligible, and they’re only a 13.5-point underdog on the road against a top-5 Clemson squad. Syracuse is 5-1 against the spread this fall, one of the best marks in college football.

At the same time, upcoming games against Clemson, Notre Dame, Pitt, Florida State, and Wake Forest will likely spoil the undefeated season. The back half of the team’s schedule is loaded when compared to the front half.

The Tigers look the part of a possible College Football Playoff team, as they’re 7-0 overall and 5-0 in the ACC. They’re fresh off a road win at Florida State, and the remaining schedule includes Syracuse, Notre Dame, Louisville, Miami, and South Carolina. Clemson could very well be favored by double digits in each of those games.

Clemson has been tremendous against ACC foes in recent years, going 27-14 against the spread in league play the last five seasons according to ESPN Stats and Information. The Tigers present a massive test to Syracuse.

Dabo Swinney’s team always seems to have an athletic, talented defense, and this year is no different. Five of Clemson’s seven opponents have scored 20 points or fewer, and the Tigers rank third in the ACC in scoring defense.

On the offensive side, quarterback D.J. Uiagalelei has 17 touchdown passes compared to just two interceptions. Running back Will Shipley is a dynamic runner, receiver, and returner, making the quarterback-running back duo in Clemson’s backfield a matchup nightmare for most defensive coordinators.

Bet on any game

Don’t love the line in the Clemson-Syracuse game? You can place your No Sweat Bet on any sporting event, and there’s arguably no better time than October to place a sports wager. With so much action taking place, new FanDuel users have plenty of sports to choose from when placing bets.