Wager on any of tonight's college football games with FanDuel Sportsbook and you can turn $5 into $125 no matter who wins. 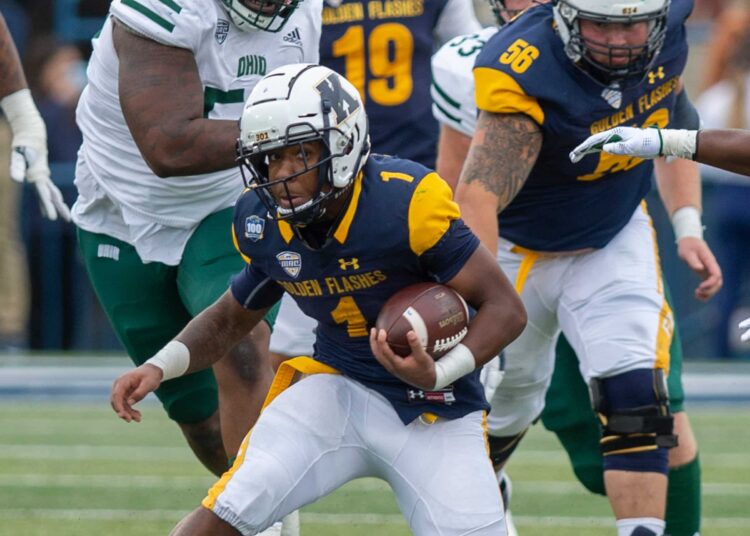 Last night’s wild finish between Bowling Green and Toledo was one for the ages, and now we get to do it all over again! Midweek MACtion is back at it again tonight, featuring a sneaky three-game card headlined by Eastern Michigan vs Kent State.

For a limited time only, FanDuel Sportsbook is offering all new users the chance to cash in on a unique welcome bonus that only requires a $5 wager to get involved. Register today using this link, and you can turn your first $5 wager into $125, regardless of the outcome of your bet! No FanDuel promo code required.

As one of the nation’s best sports betting sites, it should come as no surprise that FanDuel Sportsbook is offering new users such a lucrative welcome package. If you have yet to begin placing wagers with the site in the past, are located in an active FanDuel state, and are at least 21+ years of age, you are eligible to claim this offer.

Get started by signing up for a brand new FanDuel account using this link. By clicking that link before sign-up, you’ll automatically be in line for the bonus!

Next up, deposit at least $10 or more into your new account using any of the industry-leading banking options offered by FanDuel Sportsbook.

Once you’ve got some funds to play with, go ahead and place a $5+ wager on any sports market or event of your choosing. You can wager on any of the three MACtion games or opt to place your promotional wager on NBA, NHL, or NCAAB..the options are endless!

Within 72 hours of when your $5 bet settles as a win, loss, OR push, you’ll receive $125 in free bets from FanDuel. The free bets will arrive in one lump sum, but can be wagered in any amount. Toss the entire $125 on one bet, or break it up into various smaller wagers if you wish.

All free bets are set to expire 14 days after they hit your account, so use them fast and don’t let them slip. Also, it’s important to note that while any winnings earned from free bets are yours to keep, the value of the free bet itself will remain with FanDuel, win or lose.

While Bowling Green vs Toledo might be a tough act to follow, tonight’s MACtion card is looking primed to do just that. Starting at 6:00pm ET with Eastern Michigan vs Kent State, each of the three games set for tonight kick off one hour apart, giving MACtion fans their full fix of action on this gloomy Wednesday evening. Let’s get into tonight’s matchups, with all game odds provided by none other than FanDuel Sportsbook.

The first MACtion contest scheduled on tonight’s card will feature the Eastern Michigan Eagles (6-4, 4-5-1 ATS) and the Kent State Golden Flashes (4-6, 4-6 ATS) going to battle at Dix Stadium in Kent, Ohio. Kent State extended its chances of becoming bowl eligible after last week’s 40-6 road win over Bowling Green, but will need to win each of its next two games to finish at 6-6 overall.

In comes Eastern Michigan, who already clinched a bowl berth one week ago after they took down the lowly Akron Zips on the road, 34-28. They enter tonight’s game as a hefty 7.5-point underdog despite boasting an impressive 4-1 straight up record away from home on the season. Kent State has been the polar opposite, going 1-5 in road games but holding down the home field with a 3-1 record at Dix Stadium. Look for RB Marquez Cooper and rest of the Golden Flashes’ backfield to pick up where they left off last week (201 rushing yards vs Bowling Green) and gash Eastern Michigan’s suspect rushing defense (161.7 yards allowed per game, 4th-worst in the MAC) en route to another victory.

Next up is yet another intriguing matchup with bowl implications, this time between the Miami Ohio Redhawks (4-6, 4-6 ATS) and the Northern Illinois Huskies (3-7, 4-6 ATS). Similar to Kent State, Miami of Ohio can still will its way to a bowl berth if they win each of their next two games. That all starts tonight with a tricky road game at Huskie Stadium in DeKalb, Illinois.

Northern Illinois jumps out as a slight favorite at home following last week’s impressive road win against Western Michigan, 24-21. Miami Ohio, on the other hand, limps into tonight’s matchup following a tough loss at home against the red-hot Ohio Bobcats. QB Brett Gabbert shined for 244 passing yards to go along with three touchdown passes to WR Mac Hippenhammer; however, the Bobcats’ explosive offense was too much to handle for Miami, posting 27 points in the second half and scoring on all five possessions.

They will now be tasked with containing Northern Illinois, who is averaging 29.2 points per game on the season – good for 4th-highest in the conference. Back the Huskies here to pick up their first conference win at home, and their first in DeKalb since they took down Eastern Illinois back on September 1st.

Rounding out this delicious board of Wednesday night action is a matchup between the Western Michigan Broncos (3-7, 4-5-1 ATS) and the Central Michigan Chippewas (4-6, 4-5-1). The Chippewas will play in front of their home crowd at Kelly/Shorts Stadium and push for that elusive fifth win heading into next week as the regular season comes to a close.

The Chippewas are in the same boat as Kent State and Miami Ohio at the moment, meaning they will need to win out in order to secure their spot in a bowl game. The odds are certainly in Central Michigan’s favor tonight, as they open as a 10-point favorite at home and are listed as high as -400 on the moneyline at FanDuel Sportsbook. These odds are a heavy reflection of both teams’ recent play, as Western Michigan enters tonight’s game having lost four of five conference games, whereas Central Michigan has been roaring since its poor 1-5 start to the 2022 campaign.

The Chippewas have won two straight and three of four entering tonight’s game, and should have no problem taking care of the lowly Broncos. Western Michigan’s offense has been abysmal this season, averaging just 19.6 points per game – just 0.1 higher than the league-worst 1-9 Akron Zips.

While residents of Ohio await the state’s legalized sports betting launch on January 1, 2023, FanDuel Sportsbook Ohio is offering a very special pre-registration bonus for all players who sign up early using this link!

Those who register using the link above before January 1, 2023 will receive $100 in free bets on the house PLUS a three-month subscription to NBA League Pass!

Get started today and by the time FanDuel Sportsbook accepts its first legal wager in the Buckeye State, you’ll receive your $100 in free bets and NBA League Pass code. The free bets for this promotion are set to expire 30 days after issuance, so keep that in mind once you’ve acquired them.

FanDuel Sportsbook will also be launching in Maryland within the next few days! Similar to Ohio, all new users who get in on the action early using this pre-registration link will automatically receive $100 in free bets and a three-month FREE subscription to NBA League Pass.

Sign up today and as soon as FanDuel Maryland goes live, you’ll start out with $100 in free bets and unlimited viewing access to any out of market NBA games.

Free bets will expire after 30 days and will not return the value of the free bet itself, only the winnings.