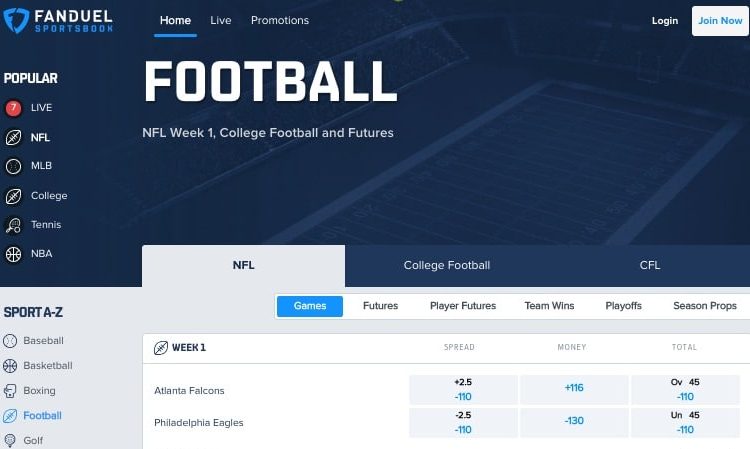 Both FanDuel and William Hill debuted their online sportsbooks this past weekend in soft launch phases as the NFL regular season kickoff nears on Thursday, Sept. 6. These trial launches came after the companies received authorization to run a five-day testing period by the New Jersey Division of Gaming Enforcement, according to the Associated Press.

During the trial phase, Sports Handle was able to deposit and observe the FanDuel Sportsbook web platform, but was unable to download the mobile app. The William Hill mobile/online sportsbook is currently operating only on Android for now and was not available for download during a period of “restricted opening hours.”

The release of these two platforms, which appear poised for a full launch in time for Week 1 of the NFL regular season (on Thursday or fully on Sunday) and Week 2 of the college football slate on Saturday, make them the fourth and fifth to hit the New Jersey sports betting market — following the Aug. 6 launched of the DraftKings Sportsbook (mobile and web, via Resorts) and later in August the playMGM NJ sports app (mobile only, via Borgata) and the SugarHouse online sportsbook (mobile and web, via Golden Nugget).

For now we can offer observations of the FanDuel Sportsbook web platform, which actually is live as of the time of this writing. In one sentence: It’s pretty good. Following the company’s acquisition by the Ireland-based sportsbook powerhouse Paddy Power Betfair (PPB), FanDuel now has the backing of PPB as well as IGT technology.

The FanDuel sportsbook very much shows technical functionality of the FanDuel daily fantasy platform and overall aesthetic. That familiarity should be a boon for engaging existing DFS users.

Here’s a look at the live betting screen, which lights up red and green during when prices change during games in progress: 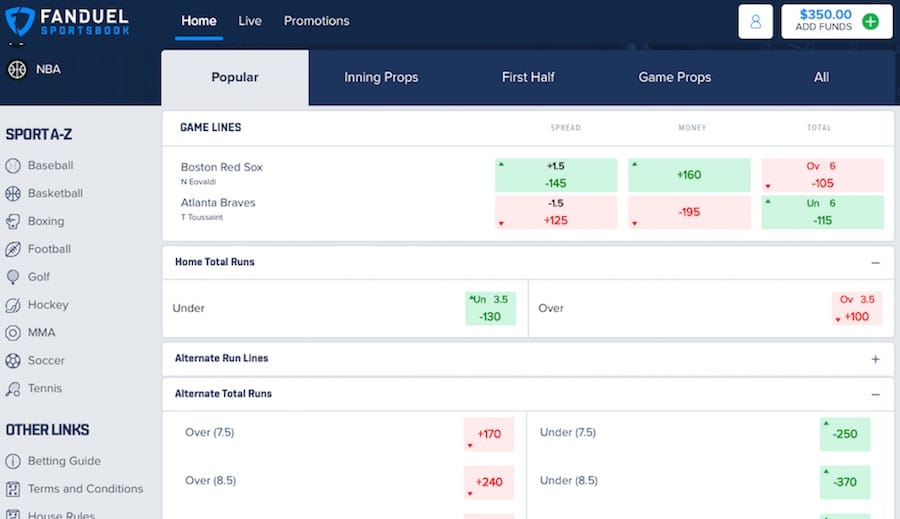 Here’s  a look at NFL Week 1 lines and prices: 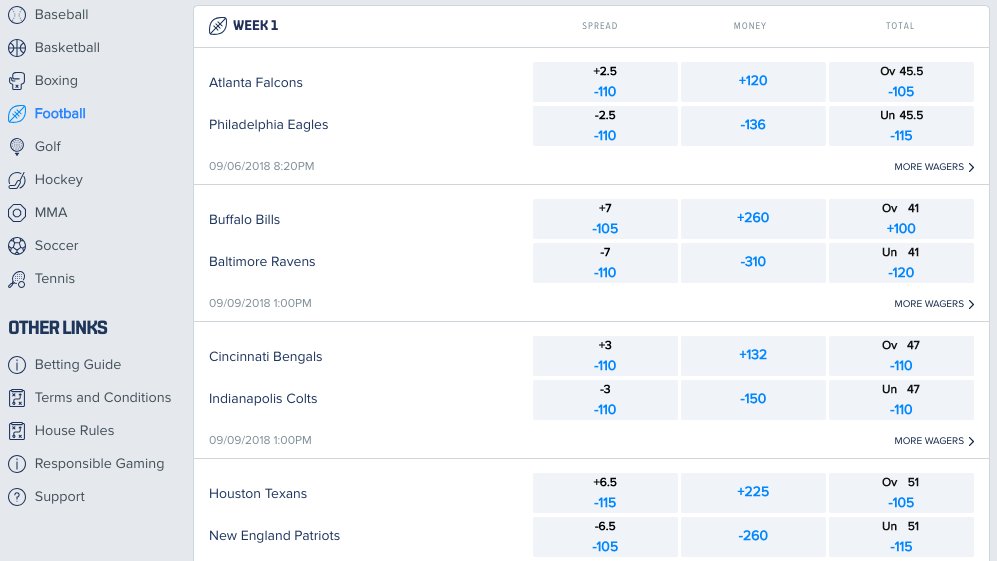 The Bills/Ravens game is actually just 15 cents with a traditional 20 cents on other games and totals. The moneylines are also in line with industry norms. Wagering is available on baseball, basketball, boxing, football, golf, hockey, MMA, soccer and tennis. As seen above, pricing on live in-play may differ from that of wagers before the game.

It appears FanDuel took to heart the criticisms of the rollout of its retail sportsbook at the Meadowlands Racetrack in northern N.J, and perhaps decided to wait to release the app until it was truly refined and ready for a good first impression. During that mid-June debut, offered prices were brutal and there was also a kerfuffle in connection with its on-premises winning wager payout hours.

For now the FanDuel futures menus is not as robust as what we’ve seen at playMGM, but the more popular betting options are posted, and consider this load of props for the upcoming Eagles-Falcons contest. The web platform is fast and smooth, there’s plenty of in-play props on baseball, and we expect the same for football. Teasers are readily accessible and parlays pay 2.6:1. We’ll dig in further when the mobile version comes back online.

Although we missed the window to check out the WH sportsbook, we expects it’s pretty similar to its Nevada version, for which screencaps are available.

Update: the web platform is currently up and running: 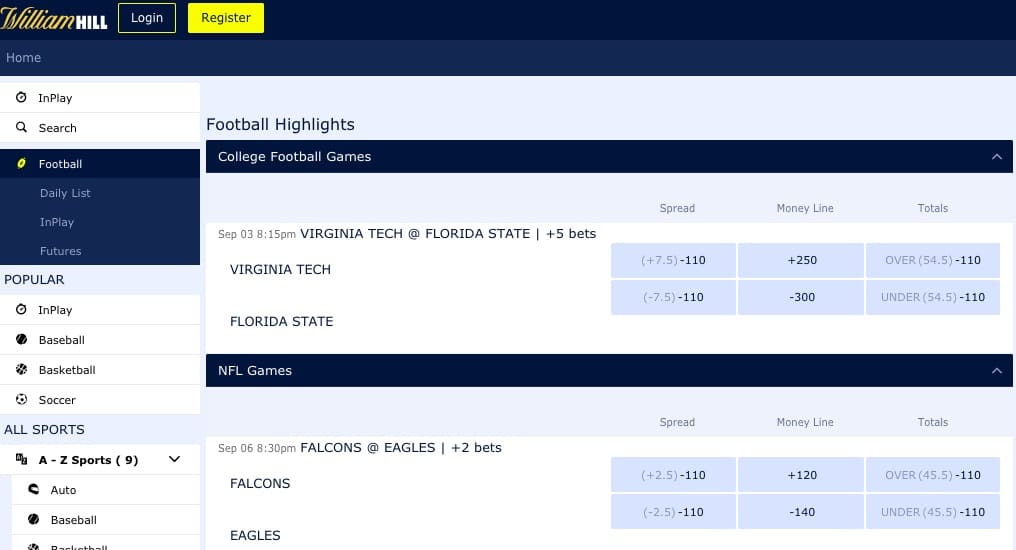 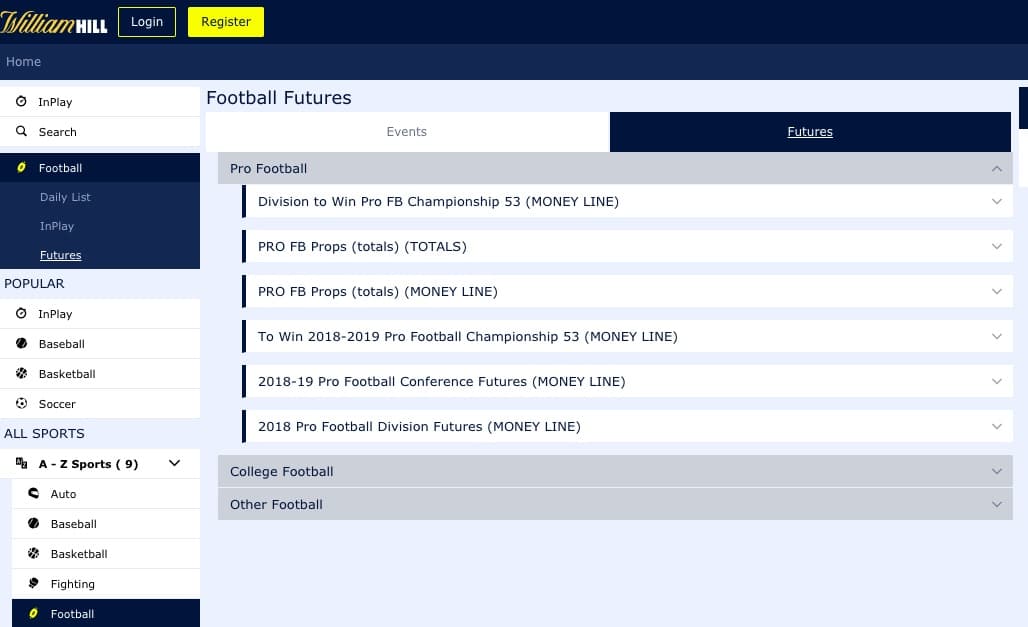 It was a busy week for William Hill in West Virginia as well. At the Hollywood Casino at Charles Town Races in W. Va., bettors wagered $340,000 on the first Saturday at the William Hill-operated sportsbook, per Legal Sports Report.

Had a great time at the Hollywood Casino at Charles Town Races today! @HollywoodCCTR #promotion pic.twitter.com/cHkac0g63k

That’s only at the Hollywood Casino, mind you. There are four other properties that will be opening soon, including the FanDuel Sportsbook at the Greenbrier Resorts in White Sulphur Springs, W. Va.  Each of the West Virginia sports betting casino licensee properties are expected to offering mobile/web-based betting in additional to their retail operations.