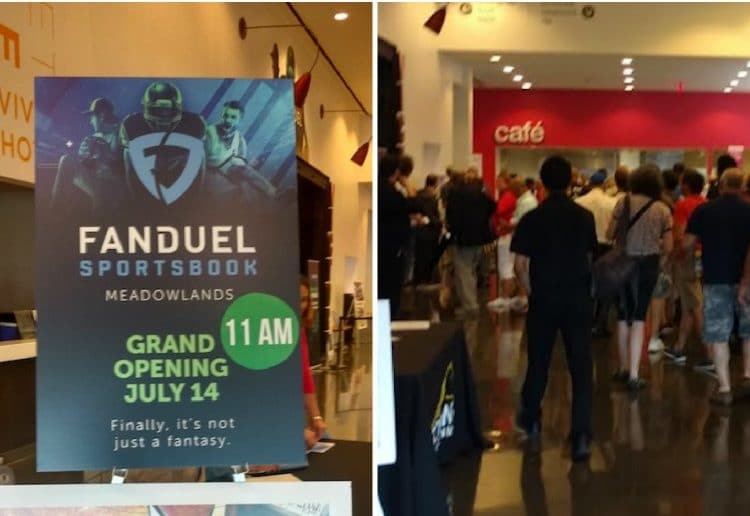 At the launch of the FanDuel sportsbook on July 14

The metamorphosis from daily fantasy to sports betting operator became complete on Saturday when the FanDuel Sportsbook launched at Meadowlands Racetrack in East Rutherford, N.J., on the same premises as MetLife Stadium, home to the New York Giants and Jets. FanDuel will remain in the DFS business, but this new sports betting opportunity in the U.S. is much bigger with the vast majority of the market yet to be captured.

A nervous excitement pulsed through the recently-remodeled Victory Sports Bar & Club inside the facility, where 10 ticket windows were staffed by employees wearing collared shirts emblazoned with a FanDuel Sportsbook patch. Some of the employees at the New Jersey sportsbook are brand new hires who received about two weeks of intensive training prior to Saturday.

“I was actually able to sleep last night,” Meadowlands Racetrack general manager Jason Settlemoir said before the facility opened. “The first thing I do in the morning is turn the TV on and I saw ‘FanDuel Sportsbook set to open’ up at Meadowlands Racetrack. When I came in, it was everything I envisioned for this part of it, so I’m excited and ready to go.”

Six betting windows ready to go on on one side or the Victory Bar inside @TheMeadowlands FanDuel Sportsbook.

These and other officials offered remarks from a podium at the front of the house about an hour before the sportsbook opened to the public.

“We have a great opportunity here in the state of New Jersey to preserve jobs and create jobs and provide dollars for vital programs that our citizens need,” Caputo said from the lectern. “This is an economic shot in the arm. And this will be ongoing revenue — not a one-shot deal.”

The deal began exactly one month ago on June 14 when Monmouth Park in Oceanport, N.J. became the first sportsbook to open, under the direction of operator William Hill. The MGM-owned Borgata began taking bets shortly thereafter in Atlantic City. Together those two properties (with some help from three days of wagering Ocean Resort, also operated by William Hill), generated $3.4 million in gross revenue (on a cash basis accounting method). New Jersey collected $293,000 for its coffers.

This all comes after New Jersey won its Supreme Court case, Murphy v NCAA, in May against the NCAA and major pro sports leagues, which together had blocked efforts to legalize for a decade under the now-extinct federal law banning sports wagering outside Nevada, the Professional and Amateur Sports Protection Act (PASPA).

“[Legal sports betting] is going to make something that’s been in the shadows and taking place illegally, and make it legal,” said Meadowlands Racetrack Chairman Jeff Gural.

Resources and Training From Paddy Power Betfair, and Their Selection as a Partner

"We saw great results already in only two weeks. By the way I bet on France to win the world cup at Monmouth." Here at @TheMeadowlands pic.twitter.com/OQiGVXa0VB

The Meadowlands has been preparing for this moment for a while. So has FanDuel, whose acquisition by the powerful Ireland-based bookmaker Paddy Power Betfair (PPB) was completed just this past week.

PPB has been instrumental in preparing the FanDuel Sportsbook for launch — with FanDuel serving as the face of the collective operation, as evidenced by the abundance of signage around the property erected at the temporary facility. The sportsbook will be undergoing an expansion and remodeling before football season that will increase the number of ticket windows and televisions and more.

“The betting software is good, it’s simple, quick and accurate,” one ticket writer said. “I like it.” But no doubt there are some jitters. One employee who booked a $500 wager was “almost shaking,” he told a colleague.

“We’re leveraging the entire global resource base,” FanDuel CEO Matt King told Sports Handle, regarding the collaboration between FanDuel and PPB. “We have their expertise helping to build the mobile app. We’re also using their pricing and their risk management. And what that means for fans is that we’re going to be able to offer more markets, more bet types than really anybody else out there.”

King is mindful that while the U.S. sports betting opportunity is tremendous, the competition for market share will be fierce. FanDuel beat fellow DFS giant DraftKings to the punch, but DraftKings is in the game too with a partnership in Atlantic City with Resorts Casino, which is expected to begin operations before football season.

“This is going to be a very competitive market,” King said. “We think that we’re in a great position because the FanDuel Group is the largest online gaming operator by almost a factor of two. And we think that’s an incredibly powerful position when coupled with the resources we have with Paddy Power behind us.”

Speaking of Paddy Power, there are questions around the industry about why U.S.-based sportsbook operators appear to be idling as European companies make inroads in the U.S. market.

“We put out a request for proposals and received seven or eight,” Gural said of their selection of PPB/FanDuel. “Mostly from abroad.” He said the process of choosing their partner, which has now formed the FanDuel Group, took about a month.

Engaging Clients and Fans Online and in Retail.

One patron at the sportsbook came from Philadelphia just to take in the scene. He didn’t realize until he got there that this was a FanDuel sportsbook.

“Oh really?” he asked. “I think it’s good business, especially in this area. You’d think that’s the logical step for [FanDuel]. They kind of made DFS legal, so once legalized, it’s easier for them jump into this.”

“I don’t even know what I’m wagering today,” said his friend, who hails from Garfield, about nine miles north of the Meadowlands in New Jersey. “I just want to see what the similarities are here to Las Vegas, see what the lines are like. I might play some World Cup.”

That patron may have had some pause about betting the World Cup after seeing the startling line inside:

As photographed by a few folks, the @FanDuel #WorldCupFinal lines on winner at @TheMeadowlands are not good right now.

If FanDuel Sportsbook wants to attract any semi-experienced or discerning customers going forward, it will have to re-evaluate the vig. Will it adjust when there’s more competition in the market?

Another open question is how the leagues will embrace legal sports betting, or create distance from it. The leagues have been pushing for a controversial “integrity fee” or “royalty,” in which they would take a percentage off the top of all wagers booked legally in states that would grant them such a request. But so far no state has imposed such a cost upon its licensed operators.

The FanDuel Sportsbook at the Meadowlands is in a unique position given its proximity to an NFL stadium, MetLife. ESPN’s David Purdum reported that there has been talk about a shuttle between the stadium and the sportsbook.

“We’re deep in the conversation of how this is going to work on a number of fronts,” King said. “We’re looking forward to being great partners in and around the area.”

On the digital front, FanDuel — which had operated exclusively online until Saturday — is close to introducing its online sportsbook product and mobile app.

“We’re weeks away from launching,” King said. “Obviously it’s important we do that with the regulators, so we’ve had people furiously working on it for more than six months, and we’re getting very close.”

Mississippi sports betting and West Virginia sports betting will be next to move. Both states are preparing operators to open up shop before football season. FanDuel also secured a partnership The Greenbrier Resort in West Virginia, which is one the Mountain State’s five licensed properties gearing up.

The U.S sports betting opportunity is vast, and the opportunity and experience in each state and venue will be at least a little bit unique. And ever changing.

“Greenbrier will be a bit different because they don’t have a facility quite like this,” King said. “It will be interesting to see in a lot of casinos that don’t historically have sportsbooks, how we end up outfitting them and what’s the right retail experience. There’s also going to be additional technology like self-service betting terminals that will be coming out. So you’re going to see an evolution of our retail format over time.”

Indeed, the evolution has only just begun.